When we decided to go to the UK for a holiday, and also to visit Comic Con Liverpool, there were already a lot of guests announced. Realizing we would actually be going to Liverpool, Liv and I took a moment to look at all the guests and discuss. I remember us scrolling by Lori Petty. I was so enthusiastic. "A League Of Their Own" (Lori plays the role of Kit) is one of my favorite movies and she also played an unforgettable role in "Orange Is The New Black" as Lolly Whitehill. I knew I wanted to meet her instantly. Liv is a fan of A League of Their Own too, so she was happy as well. I was! I love "A League of Their Own" and I also loved Lori as Tyler in the 1991 thriller "Point Break". So this was a great chance! I immediately started showing Liv how great Lori is in "Orange Is The New Black", I was so enthusiastic. And I know many of you will know her for "Tank Girl" as well. If you want to read more about Lori Petty's roles and her background, check out the article that Liv wrote about the guests of Comic Con Liverpool.

On our first day at Comic Con Liverpool, Lori Petty wasn't there yet. She would be a guest on Saturday and Sunday. On Friday we already met Ryan Hurst and we couldn't wait for Saturday to get the chance to meet Lori. But we hadn't figured out what to do yet. We hadn't bought a photo op in advance. We wanted to see how everything would fit in our schedule and we also love getting an autograph or selfie because that gives a little bit more time. We would decide on Saturday what we wanted to do. The main idea was a photo op.. If our schedule would permit it. At that point we did not know yet how busy our day was gonna be...

On Friday we already tried to do some homework. We walked by Lori's booth to see if she would even do selfies. But there was no price (yet) on there for it. We asked someone from Comic Con Liverpool and she said that it would be decided on Saturday!

On Saturday, we noticed soon it would be a busy day! We did a quick round at the con, starting with Lori's booth. She wasn't there yet. And it wasn't clear as well whether she would do selfies. Ok, then we would first watch the Ryan Hurst panel and then we "had to" go for or our photo op with Melissa Joan Hart and then we tried queuing for David Harbour. We knew a photo op would be tight. So we were thinking about a selfie now. Less queueing, lots of fun. We were in a hurry that Saturday, so we rushed around the comic con. By that time we already did a lot of waiting and queueing and we were not taking very good care of ourselves. We were hungry as hell. We got something to eat and drink and after that, we were ready for our action plan! Let's see what Lori Petty was doing!

Meeting Lori.. Or not?

We walked to Lori's booth (again). And this time she was there! And then.. then we freaked out! Lori was sitting there and it wasn't very busy. So we could buy a ticket quickly and get a selfie.. But we got scared! We were suddenly doubting: "Should we go?" We saw her sitting there: glasses on, a cap on. And we were a bit intimidated I have to admit. Thinking also of her character in Orange Is The New Black.. And we were considering if we should go at all. Yeah, we sometimes have these moments.. haha yes we were pretty scared to go at that moment. I don't know what we were thinking, but Lori does have a tendency to play characters that are a bit crazy, so we were a bit star-struck.

We were walking a bit up and down. And decided to look a bit on Instagram! There we saw 2 important things.

So we went for it! We got in line for the tickets, bought a selfie ticket and off we went! Full of excitement we walked towards her booth (excited is an understatement). But well, you can guess it... She wasn't there. Out of all things, she had her PHOTO OP. Yup, that thing we thought we couldn't fit in! Aaaah I hate it when that happens. You are fully prepped and your adrenaline levels are off the charts. At that moment you feel like the world is yours for the taking, in your head the victory music begins to play...and then: an empty chair...and back to reality.

We decided to then queue for Melissa Joan Hart. Liv wanted to get an autograph from her on a PlayStation game so we started queuing. The queue was long, but we were optimistic! Let's do this. Well, we were wrong! When we were third in line (THIRD!!!!), Melissa HAD to go for her photo op. NOOOOOOOOOO. What to do now?? We had so much to do. Luckily one of the volunteers gave us a piece of evidence that we were in the queue so we could leave shortly for drinks & the toilet. We decided to make the most of it and get our selfie with Lori! (If you want to know if we still got Melissa's autograph, check the article about meeting Melissa Joan Hart).

We walked over to Lori's booth (again). And now she was there, we had a ticket and we were REALLY going to get the selfie. Oh YEAH. And yes, we still nervous. Very nervous. We were going to meet LORI PETTY!!! You bet we were nervous, no confident faces and victory music at that point. I was so nervous, it felt like our first real photo op (Michael Cudlitz) and at that moment we felt like cows on our way to the slaughterhouse...And then it was our turn. Lori was very enthusiastic and immediately willing to do the selfie. We made one regular selfie and then a selfie with crazy faces. She even said "Oh you girls will get me in trouble" hahahaha. It was absolutely great to meet her. She gave us a fist bump and we were over the moon. Lori was amazing and we were so happy that we did go for the selfie! You can check the result below yourself. We are still so happy looking back at this moment! Exactly! (and cue the victory music again!). 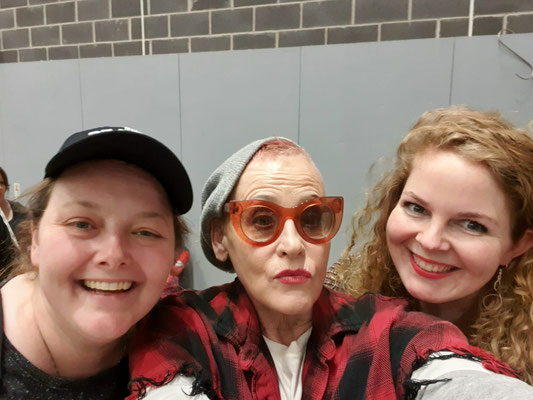 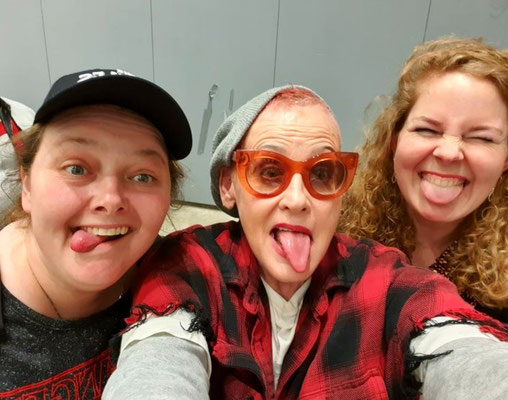