We went to Liverpool! In some previous articles, we already told you (a lot) about (the guests of) Comic Con Liverpool. Comic Con Liverpool is organized by Monopoly Events. Liv already attended one of their events a couple of years ago: For the Love of Horror!

Now it was time for us to check out Comic Con Liverpool for ourselves. WHOOP WHOOP. Excited is an understatement. We went to the con on Friday March 6th and Saturday March 7th. Now, sit back, relax and enjoy our Liverpool adventure!

We were super excited to go Comic Con Liverpool. Especially since we would be there for 2 days! We were in the UK a bit longer, a week before we already flew to Manchester. We stayed a few days in Sheffield, followed by Liverpool. On Friday morning, we got an Uber and went to comic con! We were so ready! We knew Saturday was sold out, and Friday would be a bit lit busy. So we figured Friday would be for exploring & looking at all the merchandise. We arrived quickly with our Uber and got in very easy. There wasn't a queue. We were greeted by Amy and we started with having a look around. On Friday, there weren't any panels, not all the actors were there yet too. Our 'schedule' for the day was simple: Have our photo op with Ryan Hurst, check out the merchandise and explore the comic con! So let us show you an impression of our first day at Comic Con Liverpool!

We had a great time on Friday! We walked around, and took the time to look at everything. And we finally, FINALLY met Ryan Hurst. We really wanted to meet him for a long time already.  But always something comes up. Either we can't go, it's too busy or he cancels. Last year, we even already bought a photo op with him at LA Comic Con. The first day, we saw Ryan, and we were like: 'Ahh we will see him tomorrow at our photo op.' Well.. NOT. He canceled that day. So we missed our chance. So started to call him 'the one that got away', lol.

But Liverpool Comic Con gave us another chance and we went for it. Since it wasn't too busy yet on Friday, we didn't have to queue for long. It was amazing to meet Ryan. He was very kind and we are super happy with our picture.

Liv also met John Challis and Sue Holderness from Only Fools and Horses. Liv got a picture with them in a great set prop! It was great. They were super kind and even urged Liv to check the pictures before leaving, so she would be sure to have a nice picture.

After these photos we stopped by the cars of Transformers Car hire UK. And it was great! As you can see on the picture, we had a lot of fun taking pictures with the cars (we sat in Bumblebee and Optimus Prima!) and meeting Dinobot Dave!  If you ever see them at a con: make sure to stop by! We loved the cars and Dinobot Dave is the cutest! We're happy to tell you that soon we will be doing an interview with Transformers Car Hire UK!

And that's not all, of course. There was a lot of merchandise being sold at Comic Con Liverpool. I saw some great coasters, but couldn't decide which ones I liked most. So I decided to wait with my decision until Saturday (because: buying new coasters is such a life changing decision!). We were also impressed by a stand that was selling reprints of movie scripts. I instantly knew I wanted one. (But which one??? Also a decision left for Saturday!). Liv bought one DVD though (for me): Straight Outta Compton! And that was it for our first day at Comic Con Liverpool. We left happy and were so excited to return on Saturday!

Saturday early in the morning, Liv and I were sitting in an Uber again. After a great comic con day on Friday, we were looking forward to this day even more. WHOOP WHOOP. Excited is an understatement. As soon as we arrived we were sure: Today was going to be WAY busier. We had a busy schedule ourselves (filled with photo ops, panels & selfies), but there were also a lot of people at the convention. Around 9.30 it was already quite busy: queues for autographs were already quite long for some actors/actresses). And only at 11.00 general admission would start!

Liv and I started with a short walk around and then we decided to head to the auditorium to be in time for Ryan Hurst panel. We found our way to the auditorium and found some great spots to sit. Ryan Hurst was a bit delayed, but in the meantime, we were entertained by the host of the panel. When he asked if there were fans of Sons of Anarchy in the auditorium, Liv expected everyone to go crazy, so yelled 'WHOOP WHOOP'. And yup she was the only one lol. That was a great moment. And well, then Ryan arrived! We loved the panel. Ryan was so funny and it was great to hear the stories about Sons of Anarchy and the Walking Dead. 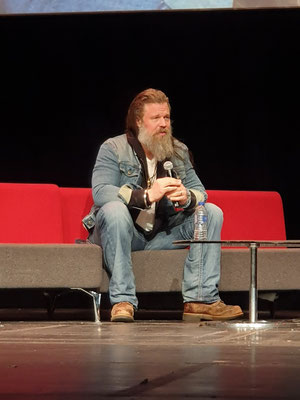 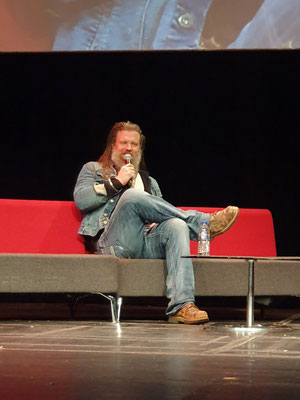 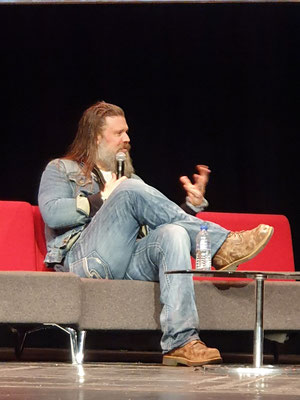 After that, we rushed back to the main area. We had a photo op with Melissa Joan Hart to attend! We didn't stop for coffee or food, we went straight ahead to the queue. Because this wasn't the only photo op we had planned! In that queue, we met up with David aka Hawkeyefilms! We already DM'ed on Instagram we would both be at the con and when we were in line for Melissa, he saw us. We had a chat until we needed to go to the actual queue for the photo. 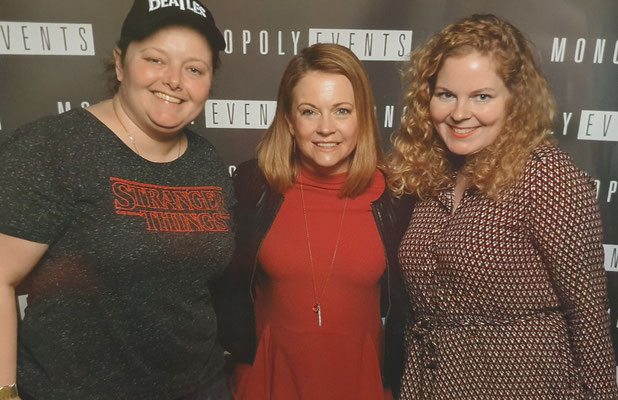 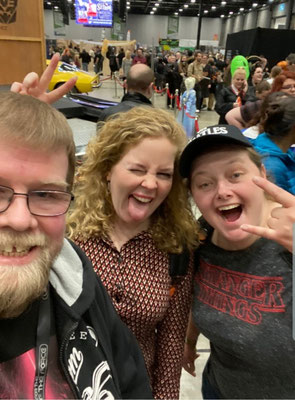 Right after Melissa, it would be David Harbour's turn. We queued for Melissa, got the picture (love it!) and went straight ahead to the queue again. A queue that very, very long! We really had to look and walk to find the end of the queue. We got in line and we were excited!  We had one great photo in the pocket and we were on our way to the second one. The only concern we had was if this queue wasn't too long for this photo op of 45 min. But nothing was mentioned so we stayed queuing. Until after about 45 min, it happened. The queue was cut off. Everyone had to come back at 16.00 for their picture because David has his panel now. A panel we really wanted to see. But this also meant we queued for nothing and would miss Melissa's panel at 16:00.

We quickly went to the auditorium to secure ourselves of spots for David's panel. We sat down and David arrived after a while. His panel was awesome! It was fun to hear a lot about Stranger Things. After his panel, we felt in a huge hurry. Time was passing by so fast and there was still so much to do. We went to get some food & drinks and made a plan. 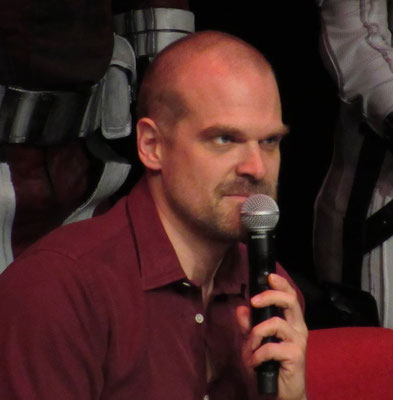 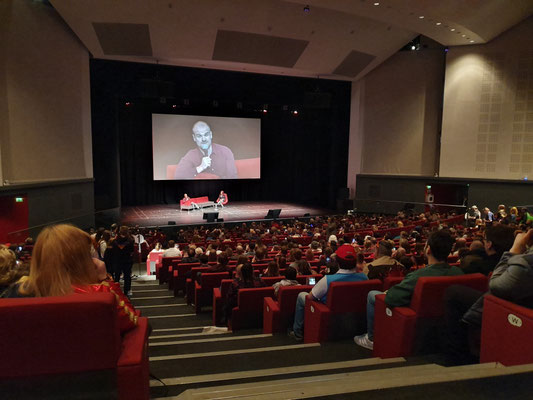 We had a huge wishlist. We wanted to see the panels of Melissa Joan Hart and the American Pie reunion panel, have a photo op with David Harbour, a selfie with Lori Petty and an autograph from Melissa. Where to start?? We decided to start with a selfie from Lori, but she had her photo op at that moment so we went to queue for Melissa. It was quite a long queue, but we were confident we could make it. David joined us again for a chat. That was awesome and made queuing fun! We were in line for quite a while when, OH NOOOO, Melissa had to leave for her photo op. And it could even be possible she wouldn't return before her panel, but after. (the photo op and panel were close to each other in the schedule). Would we still get the autograph?? At 16.00 we would have to queue for the David Harbour panel! Well, we will tell you all about it in the 'meeting Melissa' article, which will follow soon.

Let's say we managed to get the autograph from Melissa, a selfie with Lori and the photo with David. But we had to miss the panels that were on our schedule. It was a busy day and if I look at what we did on Saturday, I am super happy! After David's photo op, we still had about an hour left, so we decided to go and take some pictures for our article, get the reprint scripts we wanted to have (I bought Pulp Fiction, Liv Jurassic Park) and we will do a giveaway for the reprint script of Joker. Follow our Instagram for that! And  I bought new coasters (OH YEAH, I made THE decision).

Friday and Saturday were 2 completely different days but both so awesome. The guests were great, the people we met were great and we had so much fun. We definitely loved attending Comic Con Liverpool! A huge thank you to Comic Con Liverpool for having us and inviting this awesome event. We truly can not wait to be back!