Oh yeah!! We went to the Dutch Comic Con Winter edition 2022. This edition was even bigger than the last one and I can just say: Excited is an understatement. We had an amazing time and of course we can't wait to share our excitement with you and show you all the fun things we did at Dutch Comic Con.

As you might already know, we always love seeing the star guests at Comic Con. We also always attend a few panels and we were glad Dutch Comic Con had an amazing guest list and also a great panel planning! Fun thing is that during a panel, you get the chance to learn a lot more about your favorite actor/ actress and the movies and series they play in. You can also ask a question yourself. Panels are so much fun to see, always different and there's a lot to learn and to get inspired by.

Curious? Check out the pictures and video below!.

We were not only busy attending the panels. We had quite some guests we wanted to meet as well. There was the possibility to get a photo op, selfies (for some actors/ actresses) and autographs. We loved it and had a few selfies & autographs. We started with Stephen Amell. We were so excited he was a guest and we couldn't wait meeting him. We decided to go for a selfie. He was very kind and we both quite starstruck and nervous while queueing for this!

Then we decided give Jenna Coleman a present. While going there to hand it to her, I noticed she was doing selfies too (In the morning the sign said she didn't). So we didn't want to miss this chance and decided to get a selfie too. Jenna was very nice, she was happy with the avocado socks we brought for her. We loved meeting her and getting the picture.

Liv was also carrying around a Hulc glove, wanting to get this signed by Lou Ferrigno. He was really really kind, it was great to meet him and he was very enthusiastic. Liv was happy to have the glove signed and was also allowed to take a picture of Lou holding it. Whoop whoop!

Liv also really wanted to meet Paul Blackthorne, we went to see him on Sunday. Liv decided to go for an autograph and a selfie. Paul was very kind and talkative. He loved Liv's cap of Jaws and we had a conversation about movies likes Jaws, Steven Spielberg and collecting movies.

Dutch Comic Con also had a big experience hall. We spent quite some time here and we loved it. When we just arrived we instantly noticed the Fox booth. Always love that! There was a Chucky themed part (I am such a huge Chucky fan!) and a part where you could take a 'the Walking Dead' picture. Of course we did that too.

Later on, we went back again and visited the booth of Unbox NL. There was a huge board game vending machine, with a real person in it. Of course we had to try it. You could buy several games like Exploding Kittens but also get a present for 1 euro. We did that and I had an Exploding KIttens bag and Liv had chocolates!

We also enjoyed House of Wax again. It was so impressive! Really loved it again. The theme this time was "The stranger things of Papa Giacomo’s Freakshow". We also had a chat at the Donald Duck booth and had a look at some more board games (love it!). We really enjoyed this area. There was a lot to see!

We love gaming too, so we were looking forward to the gaming area as well. Only thing was that I had pre ordered Pokemon Violet, which was delayed (I was supposed to receive it the friday before Dutch Comic Con). So it was a bit painful to see all the promotion for the new Pokemon games hahaha. Nevertheless, we had a great time at the gaming area.

We did quite a tennis match at the Nintendo stand. It was a really intensive battle that Liv eventually won. I definitely want a rematch so I guess I'll buy the game soon haha. I also enjoyed going through the games and game merch at the dealer stands. I am always looking for some new games or merchandise.

At the stand of Megekko there was also a claw crane. We had a great time trying to catch something but unfortunately we were no natural talents haha.

There was a huge comics area at Dutch Comic Con. When Liv attended the panel of Lou Ferrigno I decided to explore this part a bit more. There was a lot to see and to buy. That was really great. Signings, books and comics: it was awesome. Liv and I both later returned together to buy the book November by Thomas Olde Heuvelt. He also signed our book, I´m so excited! (At home, I directly started reading. I love it so far!). That's what I really love at Dutch Comic Con: I always discover new things, buy new things. I didn't know Thomas' books before and now I am glad to start reading these!

At the activities hall, we found Fan Village. And we always love that! There are always several fan clubs. We're happy to learn more, see their collections and make some great photos. In Fan Village, you find groups like Dutch Whovain Community, Wizard Wear, the Flying Dutch, Brickboys, Dutch Garrison and Dutch Fredette and Jason.

And of course, there was a dealer hall. We visited this hall mainly in the morning, or at the end of the day, it was very busy during the day. I always love browsing through all the merch. Looking for new movies, merchandise, shirts, food. There´s so much to see and we always find something! 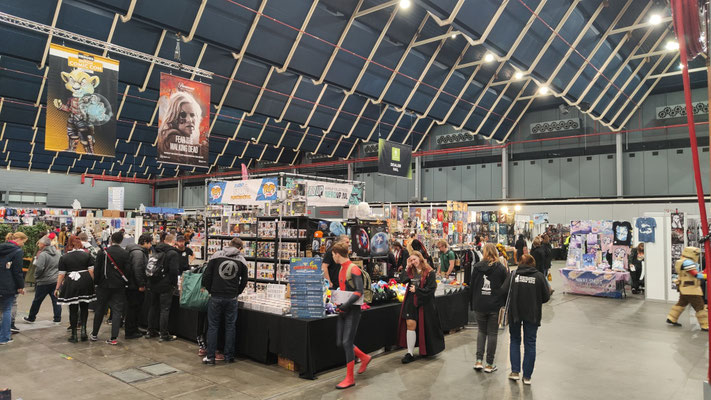 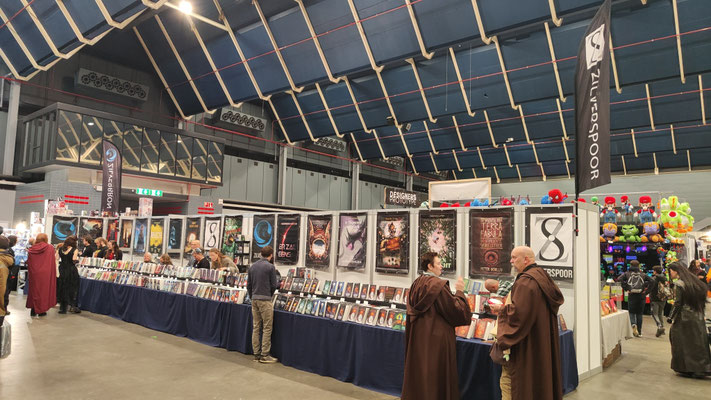 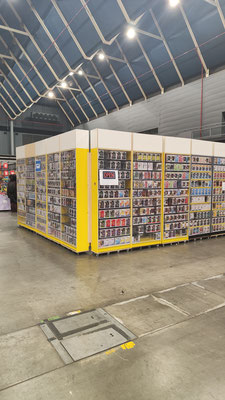 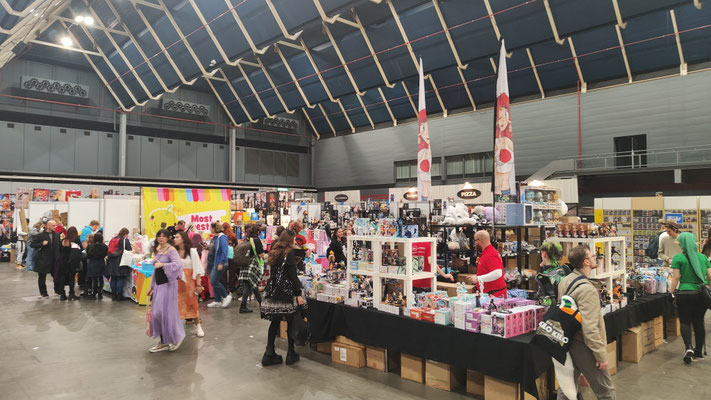 Whoop whoop... See you next time?

As you can see.... We had a great time! Excited is an understatement. We loved seeing a lot of friends again at Dutch Comic Con. Seeing the actors/ actresses and panels. Take part in activities, learn new things and make great photos. Again a weekend full of great memories. We can't wait for the next Dutch Comic Con. Next edition of Dutch Comic Con is on June 24th and 25th. Will we see you there?