Carola: At this moment, it's Friday evening. The day before Dutch Comic Con. After 2 years, it's finally time again! I really can't wait. Excited is an understatement! There is so much we want to do. People to meet. Food to eat ;). But first, I have to go to sleep. And get up in the morning. Easier said than done. Right now, Outlander is keeping me up. Even though I know getting up tomorrow will be hard. I will be tired. I tell myself to go to sleep. But Outlander keeps me up and watching. I don't have the self control to stop now. I want it both. For now, I will watch one more episode. Just one more. And then I'll go to sleep. Really. See you tomorrow! Liv: Same here! I am so ready to go to Dutch Comic Con and I know I have to sleep, but I'm not sure I can sleep. I'm so excited! I have been watching "Outlander" this evening and now I am watching "The Right Stuff" on Disney Plus. It stars Colin O'Donoghue and he will be a guest this weekend. I have to go to sleep, just another half an hour...I promise...

And there it was: the next morning! It was early, but I also couldn´t wait. We had been waiting for so long! We were so excited and started our trip towards Utrecht. Whoop Whoop! In Utrecht, it was... crowded! So very crowded! It took us a while to park our car (about 30 minutes). And when arriving at the Jaarbeurs, we noticed we were definitely not the only ones visiting Dutch Comic Con. And yes, that is definitely an understatement! There were so many visitors. But it was great seeing so many people enthusiastic about going to Comic Con again!

We were so excited to enter Dutch Comic Con. We whoop whooped in the loudest way possible and started running around to see everything there was to see. It was amazing! Bigger than other years and so much to do. Our first stop, was the Guest Square. Unfortunately David Ramsey cancelled the day before, but Manu Bannett was announced as an extra guest. We were looking forward to seeing Colin O'Donoghue. And Liv is a big "Cobra Kai" fan, so she couldn't wait to see Peyton List and Jacob Bertrand. We decided that we wanted to see their panels on the first day and Liv would do the "Cobra Kai" photo op on day 2.

Excited as we were, we explored Comic Con some more. The merchandise hall was huge! We walked around and marvelled over the many vendors and great things to buy. However, it was very crowded, so we decided to also come back on Sunday to the merchandise hall to see more.

The Experience Hall and Cosplay/Fan groups were awesome. We made some really cool pictures and had so much fun. Just take a look at some of them below.

I think you can see the excitement on our faces! We had a great time. We really loved the amount of vendors and variety in merch to buy (bye bye money). The guests, that were invited were so kind and very enthusiastic. Many visitors were in Cosplay and the amotsphere was great. Everyone was very happy. There were a lot of photo opportunities and many activities to take part in. We were there for 2 days and weren't bored for a second. I need a week, no a month, to really see and do everything. What I am I saying? We could live at comic con!

A photo op with Manu Bennett

In the morning Liv and I went to get her ticket for the photo op with Peyton List and Jaconb Betrand. I was waiting for Liv, looking around, because we were also going to meet some people. And then suddenly Liv threw her backpack in my arms, she sprinted away and told ´gonna get a photo with Manu now´. Typically Liv, she decided spontaneously to get a photo with Manu, when she saw he was having photo ops at that very moment. I was left dazed, with a backpack in my arms, my own backpack on my back, my phone in my hand and  Liv´s ticket for Peyton and Jacob in the other hand. Liv went to get her picture, and met Manu! A few years ago, she already went for an autograph at Comic Con Ahoy, but she never got the chance to do the photo op...until now.

We always love to attend panels. For this weekend, we decided to watch the panels of Peyton & Jacob, and Colin. That was a lot of fun! (Videos coming up soon!). For now, let's take a look at some panel photos. We also made some pictures at the panel of Manu Bennett

On Saturday there was one very special part of the program: a wedding! And not just a wedding, no it was a Star Wars wedding, to be more specific a Mandalorian Wedding! There were the family of the happy couple, a lot of "Star Wars' cosplayers and more than 40000 witnesses...

During the first day we also talked to and met some great people again. I really loved that about comic con! We've been going for years now and we get to know more and more great people. It's so much fun to talk, drink coffee together and run around. Love it! At the end of the day, I managed to buy two nice Switch games. Love it!

The first day went by SO FAST! We had a great time and we were totally ready for day two. At the same time, we already started panicking a bit. So much to do, so little time! I remember saying to Liv, that everyone walking around looked like they were about to explode of happiness. At least we were haha. But we were also suffering of a severe form of FOMO (Fear Of Missing Out). Yeah, while being there. When we are at Comic Con, we want to see everything, do everything, hear everything. Everything is fun! Aaaaaaaaah. Unfortunately, there's only so much you can do in a day. And we did a lot! It's safe to say, we used our time wisely. Since we already watched some panels the day before, we returned to the Merchanidse Hall and The Experience Hall. We also continued, catching up with some great people...

We whoop whooped our asses off. We really had so much fun. Dutch Comic Con also has a FOX theatre and this time, you could watch some episodes of the "Chucky" TV show (if you haven´t watched it, make sure to do so!. It´s awesome!). In honour of the last season of "The Walking Dead",  there was a kind of "Walking Dead" exhibit. We checked it out and it was really nice. We bought some DVD and Blu-rays at the Periscoop stand and soon it was time for Liv to get her photo op!

We also made some pictures at the panel of Bill Campbell, the sunday panel of Jacob & Peyton and Colin O'Donoghue's panel (which was awesome!) 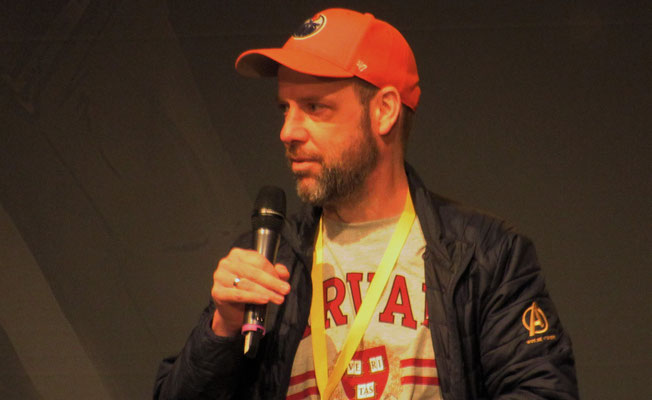 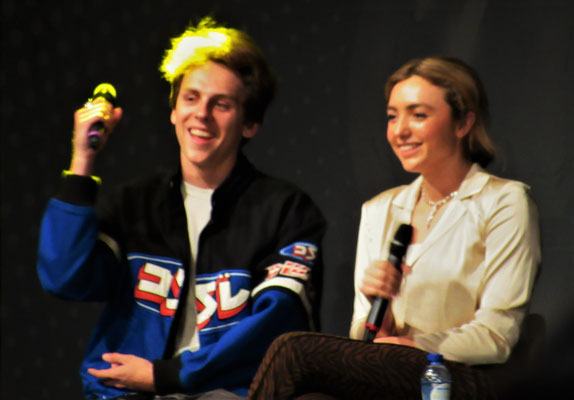 A photo op with Peyton List and Jacob Bertrand

Whoop whoop. A photo op with Peyton List and Jacob Bertrand was on Liv´s wishlist from the moment they were announced as guests. She is a big fan of "Cobra Kai" (and "The Karate Kid") and this was an amazing opportunity to meet two of the cast members. We already attended their Q&A on Satuday, so having a photo op after, was great!

Towards the end of the day, we decided to get a selfie with Colin O´Donoghue! And I´m happy we did so. Judith joined us in the queue, which made time go really fast. Towards the end of the queue, we started getting nervous. I felt like running away and don´t look back. However, I also wanted to stay and get that selfie! We had seen two panels of Colin and he really seemed great. Actually there was no need to be nervous (but we were though haha).Colin was great, he was very kind and Judith took the pictures for us. We are so happy with how the photos turned out, so thanks to our amazing photographer ;) 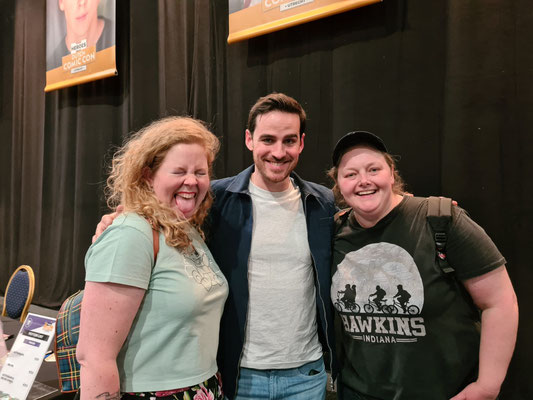 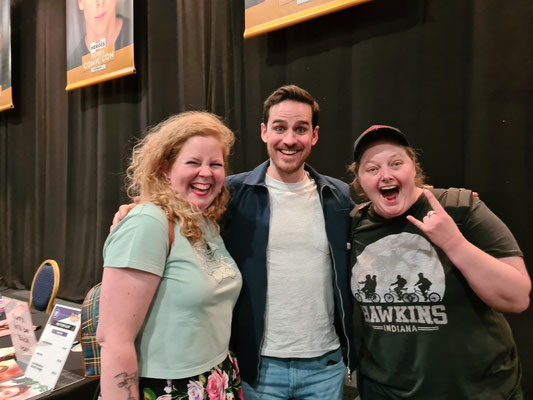 We bought some awesome merchandise at Dutch Comic Con and when it gets too much to fit in Liv's backpack, we can always leave it in the press room. On Sunday, this was the case and we decided to make a trip to the press room. When we were there and just took a cup of coffee, the press room was suddenly taken over by a bunch of very happy people. At first we did not notice what was happening, but when we took a closer look, we recognized them. They were: Dutch actress Elise Schaap, Dutch actor/writer Wouter de Jong and Dutch Youtube and media personalities Dylan Haegens, Marit Brugman and Dutch actor/designer Rick Vermeulen. In no time they had changed into some awesome superhero costumes and one Stormtrooper costume. This had to do with the upcoming movie "Superkrachten voor je Hoofd" ("Superpowers for your head"), based on the book by Wouter de Jong.  We had a great chat and took a picture with four of the heroes, being from left to right: Wouter de Jong, Dylan Haegens, Marit Brugman and Elise Schaap...

We truly had an epic weekend again. We saw many friends at Dutch Comic Con and also met new people. The guests were great and Dutch Comic Con was bigger than ever. Lots of photo opportunities and lots of merchandise to buy. It was more than epic! We can't wait for the next edition....