If you're a big fan of the Originals (like us) you know who Charles Michael Davis is. Or at least you'll know it when I say: ' Marcellus' or ' Marcel Gerard'.  Yeah! We met him at Bloody Night Con. Initially Bloody night Con Europe had invited Daniel Gillies as a guest. Oh my, Liv and I were thrilled by that. We were and we were hell-bent on letting everybody around us know how thrilled we were. Especially Tristan and Sigmund. We sang our little Elijah song for months.We both bought a photo op. I really like the character of Elijah in the Originals. The way he acts and is dressed. He's unique! But, enough about Elijah. Because Daniel canceled! And that's where Charles came in the picture. 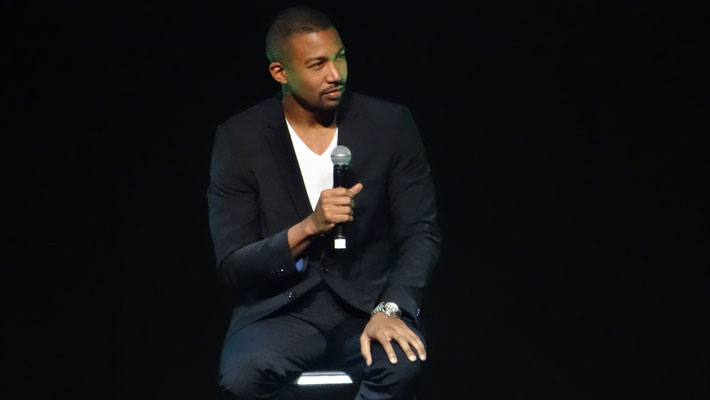 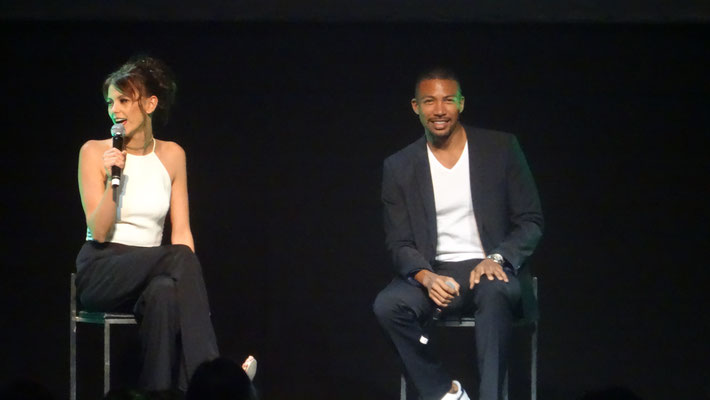 Bloody Night Con Europe replaced Daniel by Charles Michael Davis. An excellent replacement if you ask me. The role of Marcel Gerard is a very big and important one. Personally, I don't really like the character of Marcel in the first season. It actually only changed my opinion in season 4. But nevertheless, I was happy to see Charles being announced as a guest. Because even though Marcel isn't my favorite character, Charles is an excellent actor! And the role of Marcel is a very interesting one. I was thrilled, of course I would have loved to meet Daniel Gillies, but I was very happy with Charles Michael Davis as his replacement. You see: I like the character of Marcel, I think he is intriguing.

What I find interesting about the role of Marcel in the Originals, is the dynamics between Marcel and Klaus. They hate each other in a way. But definitely can't live without each other either. In a way Klaus sees Marcel as a son. Somehow, Marcel will never be a part of the family of the Mikaelsons and their ' Always and forever' pact. But on the other hand: Marcel is inevitably bound to them. And they are to him. Marcel has a unique bond with all of the Originals. It's not only the dynamics with Klaus. Personally, I'll be always rooting for Marcel and Rebekah! Even though Marcel and Elijah aren't always the best pals. And despite everything, Marcel follows his own path. Which is never fully predictable. Exactly and that's what I find intriguing about him. Sure, when he is plotting against the Mikaelsons I hope he fails terribly, but I also get where he is coming from. They do sometimes treat him like sh#t and seem to be only using them.

At the convention, our photo op for Daniel Gillies, was automatically transferred to a photo op with Charles Michael Davis. We didn't mind that. I was excited to do a photo op with him. But first, we saw his panel. He's a great person. And even if you don't like the character of Marcel, you will love Charles! He's spontaneous and enthusiastic. His panels were great.

On Sunday, Liv and I were doing all the photo ops. (Except for the photo with Nate, he was only attending Bloody Night Con on Saturday). We already wrote a few articles about meeting the actors at Bloody Night Con, so you can also already check out our stories about meeting Riley Voelkel and Michael Malarkey. As soon as we heard it was time for the photo op, we rushed to the queue. It was so busy! We really stood there quite a while, And it just seemed like nothing was happening. Even though we did see people leaving the photo op room after getting their photo. That should have been our first clue and it kind of was, but it was so very hot in the queue, we couldn't think straight.

But we just waited and waited. In the queue. We didn't really have a clear sight on the door. Because it was so crowded! The waiting really took a long time and we started to wonder what was wrong. People were coming out. But no one seemed to be getting in. How does that happen? So I walked out of the queue and asked someone. And you'll never guess this: People were already queuing for the NEXT photo op. It was completely unclear which queues were where (even that there apparently was more than one queue). It was different than the other queues. Our heart rate peaked and panic took over. We had to run inside and run into the right room. There was only 1 more person in queue before us. So we were just in time! A girl who was ' queuing' next to us, also queued for Charles Michael Davis. So she ran with us to the photo op room. We were so lucky to ask the questions just in time. It was so confusing. I'm so glad we didn't miss out on the photo op!  Luckily there were big fans (apart from me) in the room to cool it down a bit. I put my head in front of it, so I wouldn't look like a wet tomato on my photo. As you can see I asked Charles to do a bite-pose and you can still see a little bit of panic in my eyes. Anyways although we were pretty late, Charles Michael Davis was really nice. It's a shame we didn't have some more time to talk to him, because he seems like a funny and enthusiastic guy. I for one can't wait to see him in other projects. 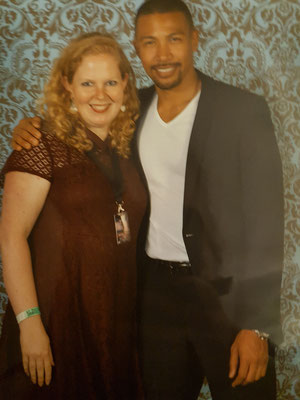 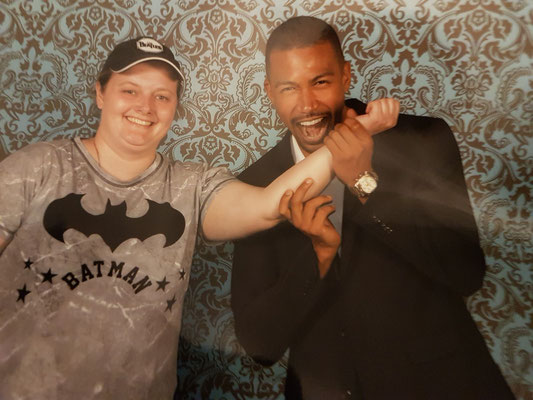