OH YEAH! We went to CCXP Cologne! A brand new Comic Con Experience brought to Europe by the same organisation as CCXP São Paulo. Now, the convention took place in Cologne from June 27th till June 30th.  We went to Cologne to check it out for you on Saturday and Sunday. Today, we will tell you ALL about our visit to this brand new convention. Let's start with a little bit of information about the origins of CCXP: The first edition of CCXP São Paulo was held in 2014 and approximately 100000 people visited this first editon. At their latest edition in December 2018 a whopping 262000 visitors made their way to the São Paulo Expo. And now CCXP came to Germany and they set base in the Koelnmesse in Cologne. 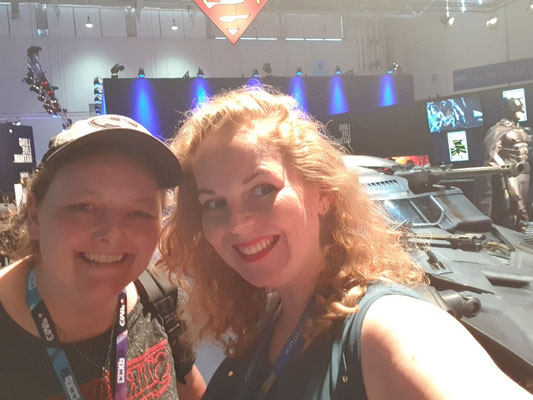 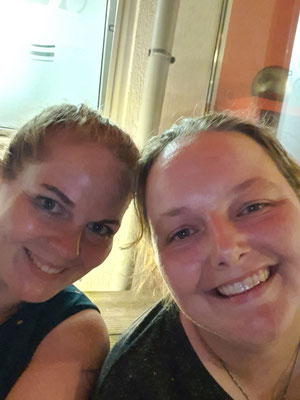 Let's start at the very beginning of our experience! We left for Cologne on Saturday morning. Way too early of course! We super tired. But excited (and excited is an understatement). But we wouldn't be Conmose, if there wasn't some adventure or drama. So that's how our day started. I was waiting for the train in Valkenburg, when Liv called me with a panicky voice. She had forgotten the spare batteries for her camera. OH NOOOOOO. Unfortunately, there was no way back. We had bought tickets for the Flixbus to Cologne, so we had to be in time. While waiting for the Flixbus, we were a bit frustrated: Why do you need to be there 15 minutes before leaving, when there's no one there??? In this time, we could have gone back for battery. Finally the Flixbus arrived and we were on our way to Cologne. We kept being a bit obsessed (where can buy a new battery?? Can we buy them at the airport??), but we weren't able to solve it. Despite this set back, we were super psyched to go to comic con (of course!!). And once we entered the Koelnmesse.. everything was great again.

The train station was very close to the Koelnmesse. That was great! It was still quite a walk though. The Koelnmesse is quite big and we had to walk a bit to get to the right entrance. Once we were ready to start the experience, we  noticed that this convention was very well organized. There were quite some steps to take: A backpack check, getting a wist band, get our tickets checked. But everything went super smooth! We were inside the con in no time. The organization was great. And as soon as we entered the con, we were even more mesmerized. Look at ALL these photo opportunities. We really were 2 kids in a candy store. We ran around like crazies, making "It" photos, Marvel photos, Annabel photos and more!  Just have a look at how much fun we had below. I have never seen so many photo opportunities at a convention and I was really impressed. I totally LOVE IT. 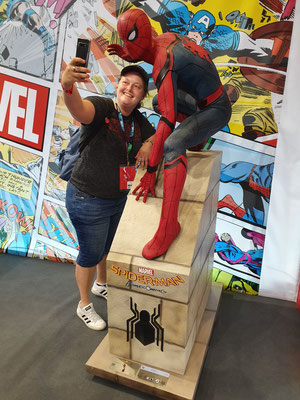 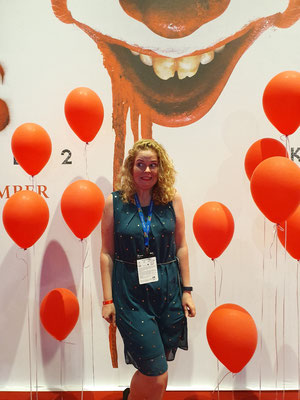 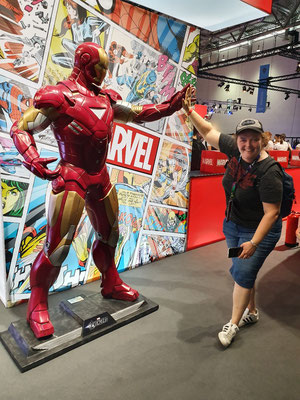 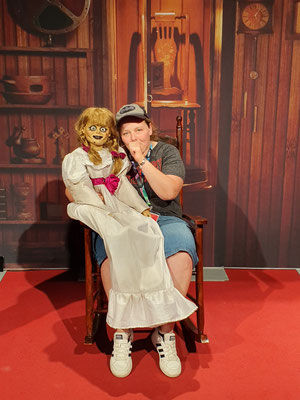 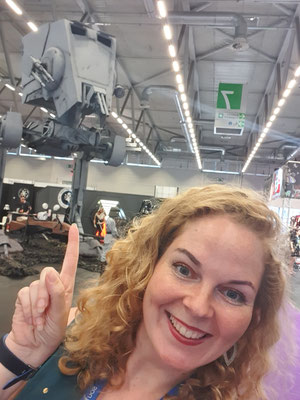 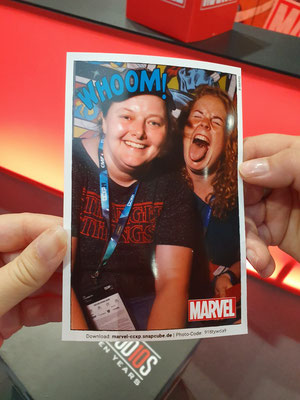 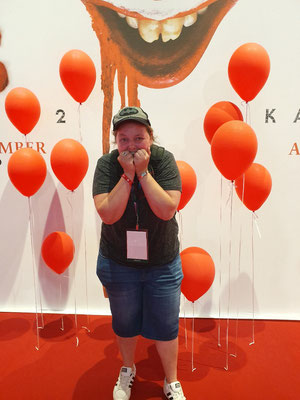 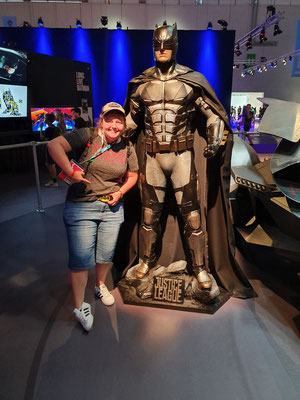 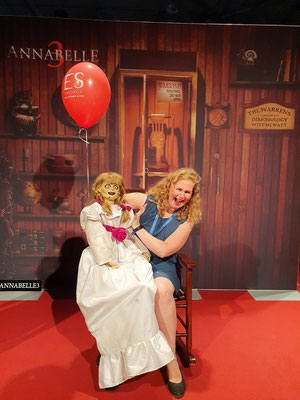 It was awesome! We had the time of our life. And this is not even everything. This was our first round.  We walked around some more, saw (some of) the actors at the signing table (sorry, we weren't allowed to take pictures) and Liv bought an autograph for Ben Barnes. Autographs work at CCXP with time slots, so she couldn't go immediately. Her time slot was between 16.00 and 17.00.

CCXP Cologne had a great guest list as well. And luckily there were also panels! The actors/ actresses didn't all have a panel daily. They had 1 panel each spread over the 4 days.  Want to know all about the guests of CCXP Cologne 2019? Check out Liv's articles about the guestlist: Part 1, part 2 and part 3. On Saturday, we first went to see the panel Rebecca Mader. We have met Rebecca before and we were super excited to see her again. We are huge Once Upon A Time fans and Rebecca is such a kind person! Here at CCXP Cologne we enjoyed her panel as well. She's pregnant and she was looking great and seemed full of energy. 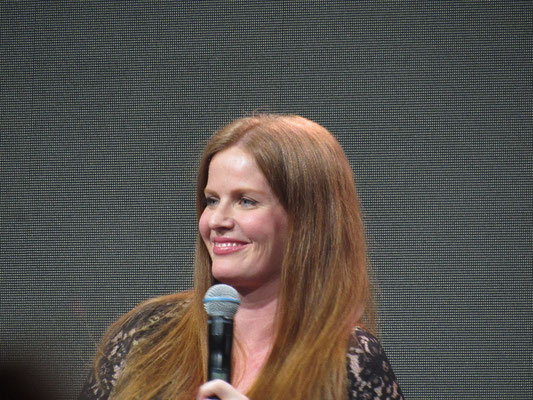 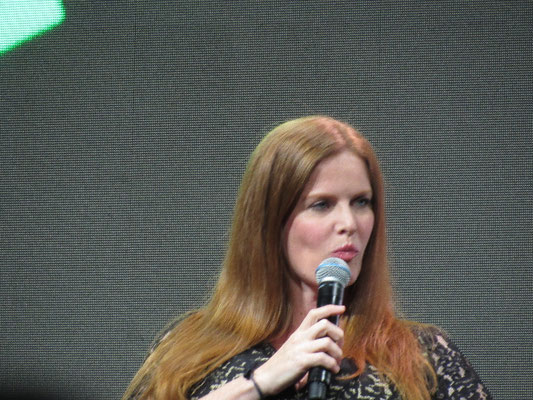 The panel location, the Thunder Theatre, was very nice. Quite a big room.There was enough space for everyone to sit, which was great. We managed to sit in the fourth row, which was fine. We had a good view at Rebecca. The panel was live translated into German on a big screen, which is nice. Of course we were just listening to the interviews in English. My English is better than my German haha. That was a small point: The intro was done in German, with still German on the screen. So double German, and no English for us. That was a bit of a pity. I liked the lighting in the Thunder Theatre. It was great for making photos and videos. And the stage was quite big and nice. I also loved how they showed some clips and the guests got a huge introduction. It really created an exciting atmosphere.

After Rebecca's panel we stayed to see Ashleigh Murray, who we all know for Riverdale. We were lucky to sit on the front row for this panel. It was really great to see Ashley! We truly enjoyed her panel. I hadn't seen her before, but she was very spontaneous and kind. 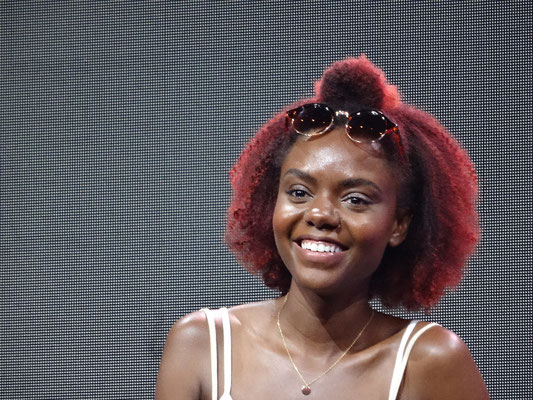 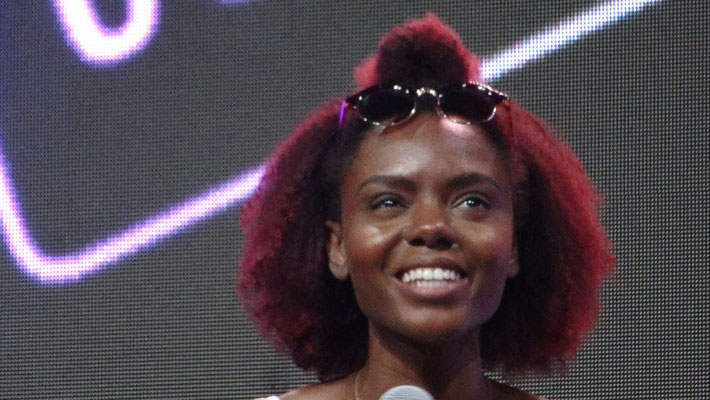 After the panels, Liv and I decided to explore CCXP some more and we walked towards the creator lounge for the first time. Most cons we attend, don't have a specific lounge for creators, so we were excited to see what it would entail. And we were not disappointed. Seriously. Excited is an understatement: THERE WAS A BALLPIT. Yes, you're reading this correctly. A BALLPIT. How long has it been since you've been in a ballpit? Well, for me it was last weekend. And I love it! Don't ask me why I'm so excited, but I am. I need more ballpits in my life. Seriously, look at how much fun we had. 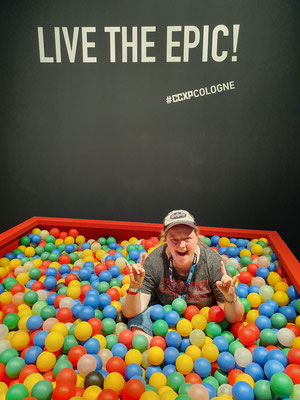 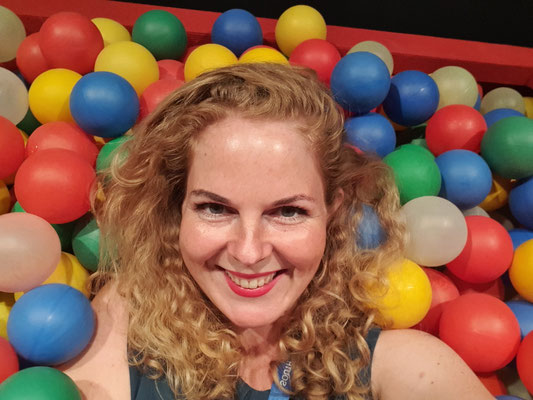 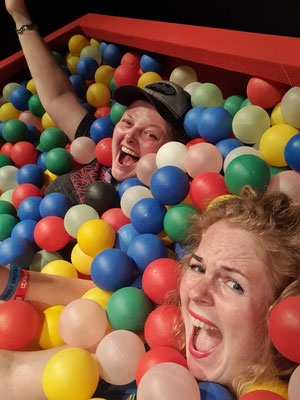 Besides that, the creator lounge gave us everything we needed to make some great vlogs, connect with other creators and more! There were specific places for vlogs & videos, which was excellent! Great background, excellent lighting and of course the ballpit for inspiration. We also  talked to a few other creators, we had so much fun together! Check the pictures below to see more of the creators room! 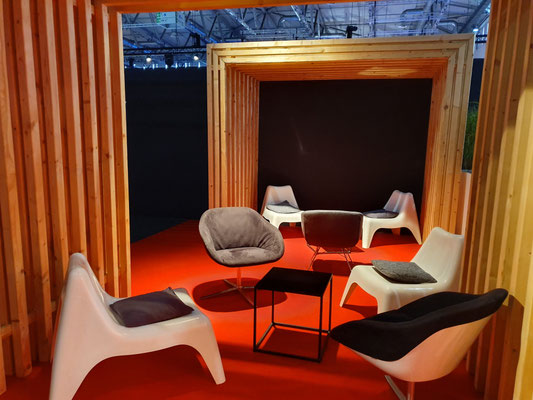 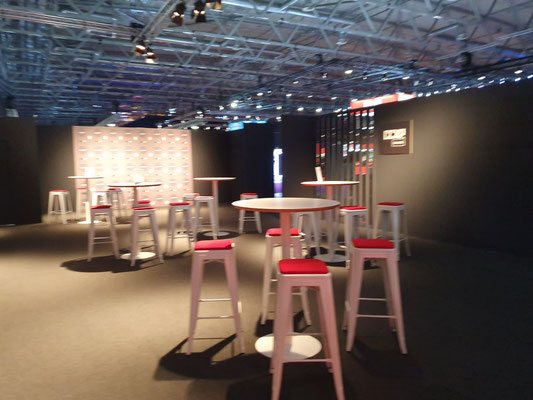 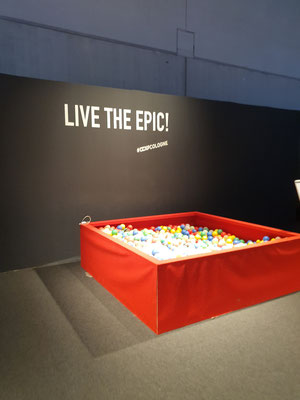 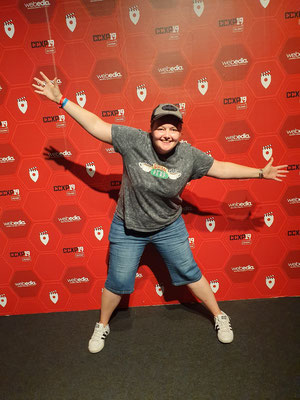 Getting the autograph... or not?

And then.... It was time to get an autograph. Liv had bought an autograph for Ben Barnes and as soon it was 16.00, we went to the signing area. I'll leave the complete explanation for the 'Meeting Ben Barnes' article. But... let's talk about it just a little bit. Full of confidence, we left the creators room and walked towards the signing area. We didn't see Ben immediately, so we just thought he was a bit late. Well, that's fine! We asked one of the volunteers, but her answer left us in shock! She told us that his autograph time had been moved to an earlier time. And that he had already left now. yup. Seriously! They sent an email to the people who had bought an autograph, but since Liv bought the autograph at the event, she didn't got an email.

Like I said, I will skip the details: You will read about that in a later article. All I can say is that thanks to the excellent volunteers, things turned out well for Liv! The autograph changed into a photo op (He hadn't left the building yet, he was first still doing some photos). And... Liv bought another autograph: For Mark Pellegrino.

About the signing in general: The signing area was clear visible, though only accessible with an autograph ticket. When Liv went to get an autograph, I waited before the queuing area for Liv. That is a pity I think. I really like to be able to just have a chat with the actors (When there's no one there) or just go together with Liv for an autograph. It's just more fun!

Jump up, jump up and get down

After all this, we were feeling wild again and we were running around again! Making pictures and having fun at the convention. I drank way too much energy drinks and Liv was super energetic too. Which means we were on the loose! CCXP was open until 21.00 so we ran around like crazies and had so much fun. The air castle was empty, so we took the chance to go for a jump and had an amazing time. We also got a balloon and then did a balloon challenge together at the con! We truly had an AMAZING first day.. Stay tuned for day 2! 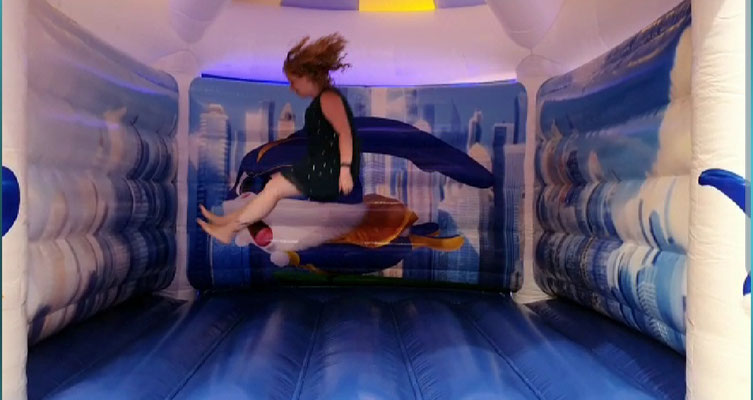 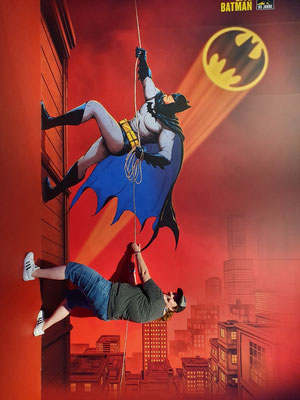 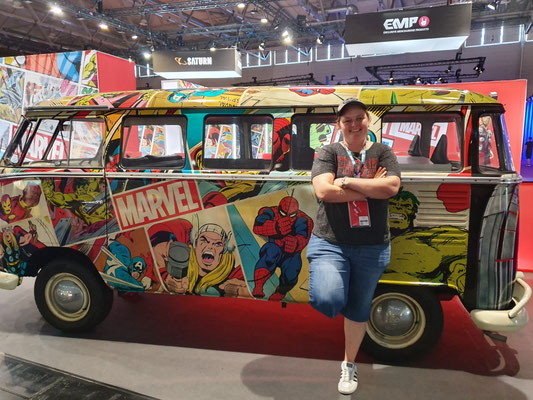 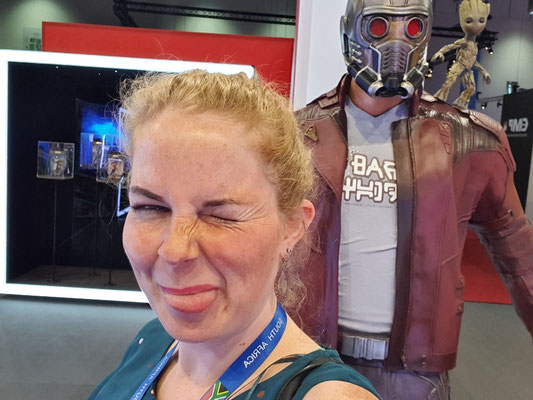