I read terrible stories about the queues to get in last year. So I was prepared for a long wait. Just like on Friday, we got in pretty fast. We arrived a bit earlier than on Friday. And I think we were in even before 10 AM! So no complaints here about that!

This time, we split up immediately. We both had a lot of things we wanted to do, so we needed all the time we could get. We picked one spot where we would meet in between panels and walking around and then split up. 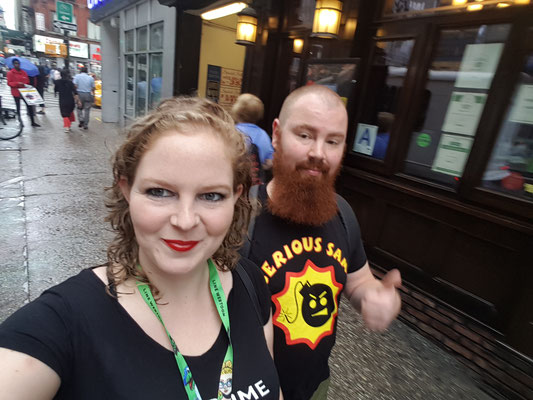 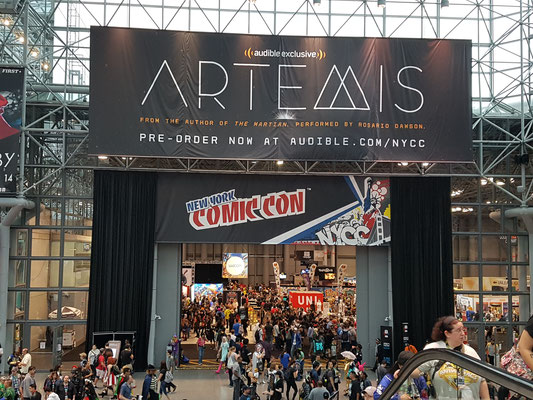 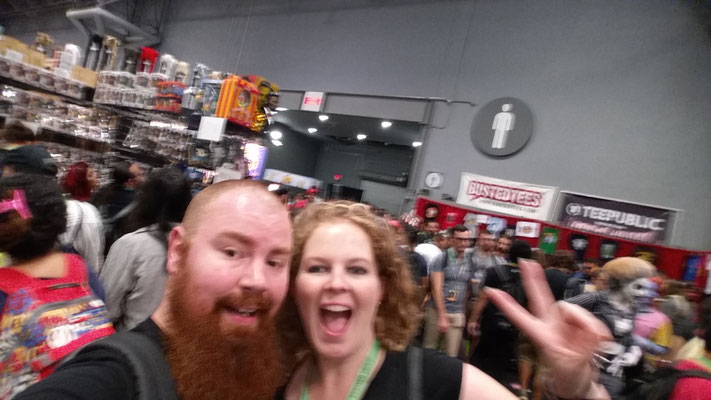 The guests and the panels

If you want to read more about the guest list, my opinion about it and the bigger panels I visited on Friday (Dirk Gently & OUAT), check out that article. TI started the day by checking out the autograph area. I hadn't been there on Friday (except for the end of the day when everyone was already gone). The queues were not very long, except the queue for Mark Hamill. There was a queue already early in the morning (10 AM) while he would start signing in the afternoon. Most of the other guests had arrived already. I could mainly see Ryan Hurst clearly since he was standing while signing. I also saw a glimpse of Michael Rooker, Pablo Schreiber and Ricky Whittle. I decided to check out the rest of the comic con a bit more and decide later on whether to get an autograph or not. (Eventually, I didn't get any autographs).

I only attended one panel on Sunday: the Sons of Anarchy panel.  I really love that show and I've seen all episodes. I've met a few cast members already (Kim Coates, Tommy Flanagan, David Labrava and Mark Boone Junior). But meeting Ryan Hurst (Opie) was definitely on my list! I was very happy to hear that he would be a guest at New York Comic Con. And of course it was great to see Theo Rossi (Juice) as well! They both also had signing and photo op sessions but I just attended their panel. I was just too busy. I loved the panel. It was at the show floor, which was nice. It was actually quite busy. And since there are no new episodes, It was full-time Q&A. 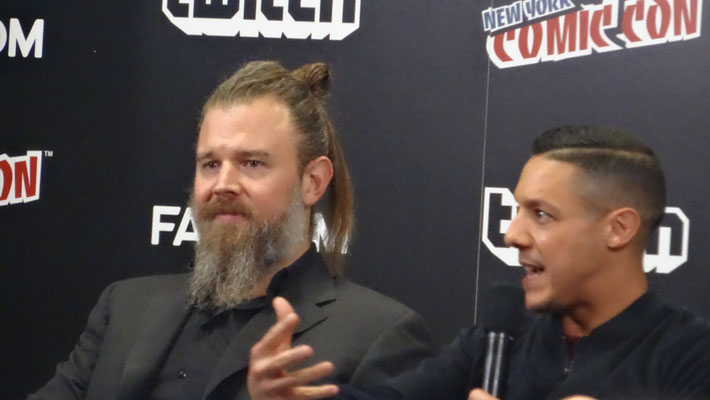 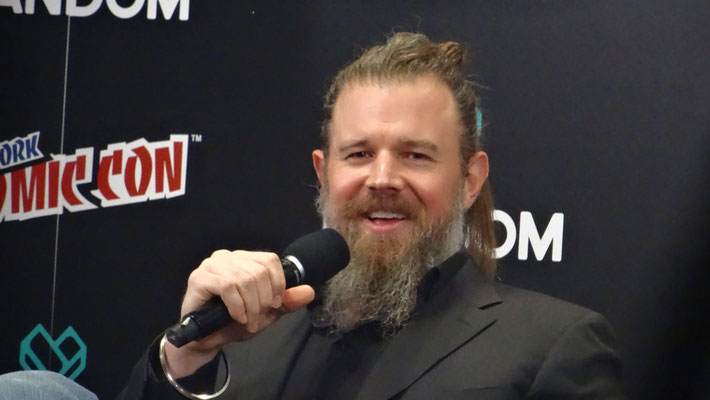 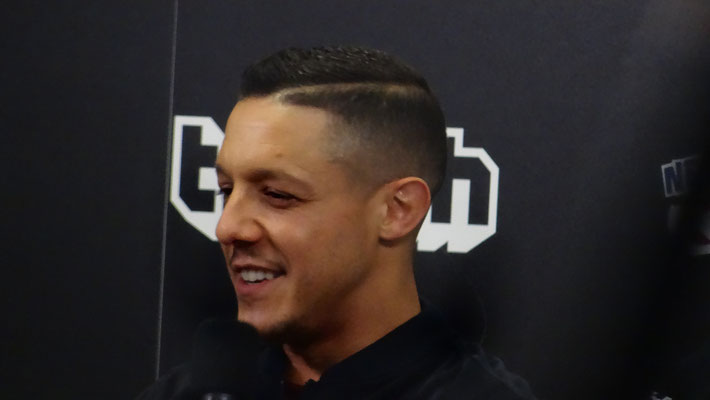 Sig also went to see a panel: The Mortal Kombat panel! They talked a lot about how Mortal Kombat had started and the success they have had since. Sig loved the panel! 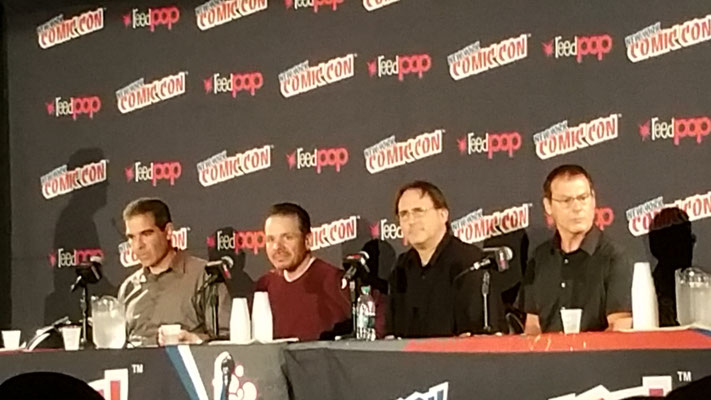 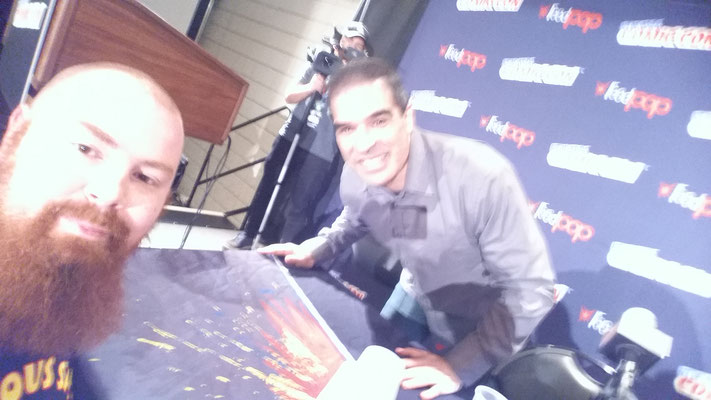 Needless to say that the show floor still was huge! So there was a lot to see! And to buy ;). Sig will make a vlog again of everything he bought in New York. I saw many comics, Funko dolls, and figurines. I would have loved to see more DVDs :). After checking out the autograph area, I returned to the show floor. This time it did it differently. I didn't walk by every booth but just did my chaotic thing haha. I ran around and just took a quick look to see if there's anything I liked. It resulted in some nice pictures quickly as you can see below. I was thrilled to get another Chucky photo opportunity. And, as a fan of Star Wars as well, it was, of course, great to see BB8. I mad several pictures with R2D2 at other comic cons, but didn't have one yet with BB8.

I also looked around for some merch. Mainly I wanted to find a figurine of Captain Spaulding but I didn't succeed. I was also looking around for some nice Chucky merchandise but didn't find anything I wanted to buy. I did buy a new shirt though: An Arrow shirt! With the text: "You have failed this city". 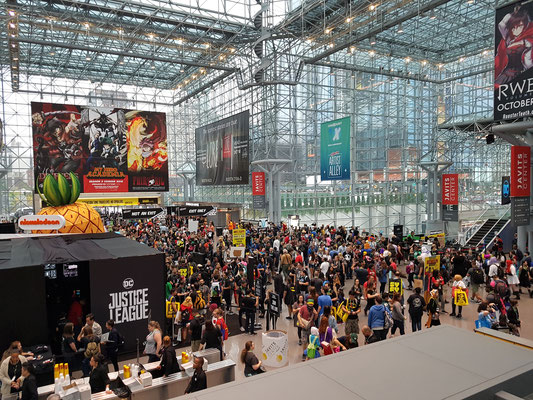 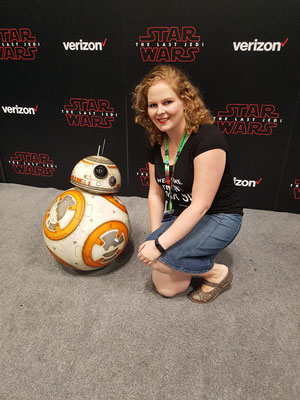 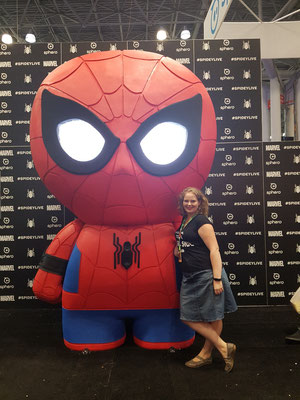 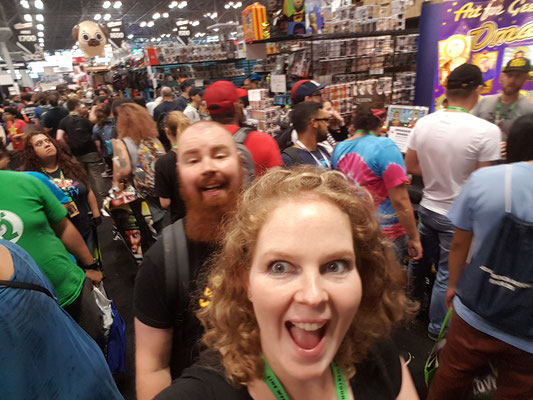 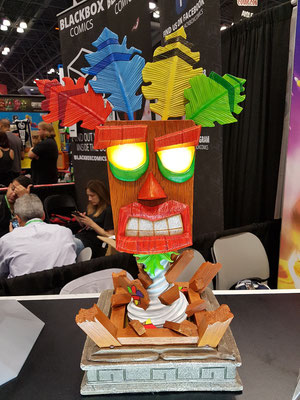 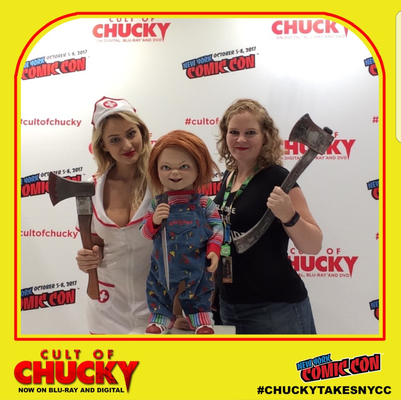 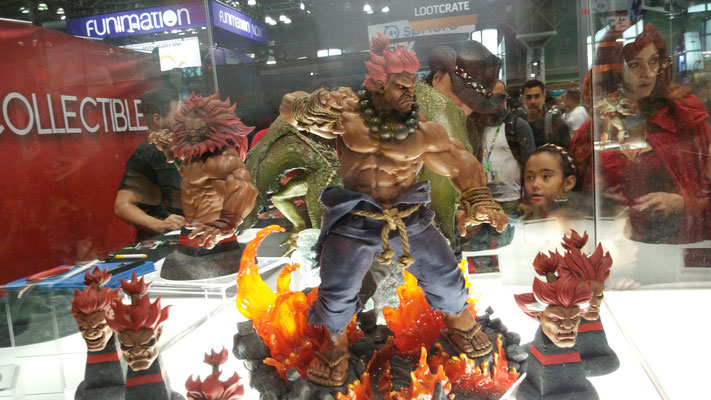 We did a lot better on this day than on our first comic con day! After the Sons of Anarchy panel, I decided to get something to eat and went to the food court. There I found cheesesteak. Yeah! That made my day. That booth also had some amazing lemonade. So I had a great meal. Sig was at the Mortal Kombat panel at the the time so I sent him a message that I was eating. After the panel, he joined me and also bought a cheesesteak. (This sounds way more easy than it actually was! The con was so big that we had trouble finding each other, lol).

The second day of comic con was great as well! I knew a bit better what to expect and I instantly went to do things I wanted to do. That gave me more rest throughout the day and the opportunity to eat and drink a bit more haha. I loved the many photo possibilities on the show floor. I totally overlooked those on Friday. It was again very busy. I didn't have to queue anywhere for a long time. Also getting something to eat was not that difficult (it was expensive haha). The second day was shorter, but somehow I was able to do more. Maybe because I just saw 1 panel. Or maybe just because I knew what to expect. I enjoyed the SOA panel a lot. And had fun running around on the show floor. I even think I *might* have seen a glimpse of Mark Hamill. But I'm not totally sure haha. I returned to the autograph area in the afternoon and I was there around the time he started signing. It was overwhelmingly busy around Mark's booth, but I think I actually saw a small glimpse haha. I loved that there's so much to see. I would have loved another panel, but there was nothing else that I was interested in. All in all, we had an amazing day!