I read terrible stories about the queues to get in last year. So I was prepared for a long wait. Nice surprise: We arrived around 10 AM and there was a queue, but it only took like 10 minutes to get in. Well done!! Everything was very organized. Blocks away there was already staff guiding you to the con. That was great. And it was quite special to walk around New York City seeing people going to comic con everywhere around you! Besides that, there was a lot of NYPD as well! I saw quite some policemen and cars.

At the con, we mainly visited the show floor and attended 2 panels. We didn't do a lot of exploring actually till the end of the day. We just started on the show floor checking out merchandise. We watched 2 panels in between and just looked at more merchandise! 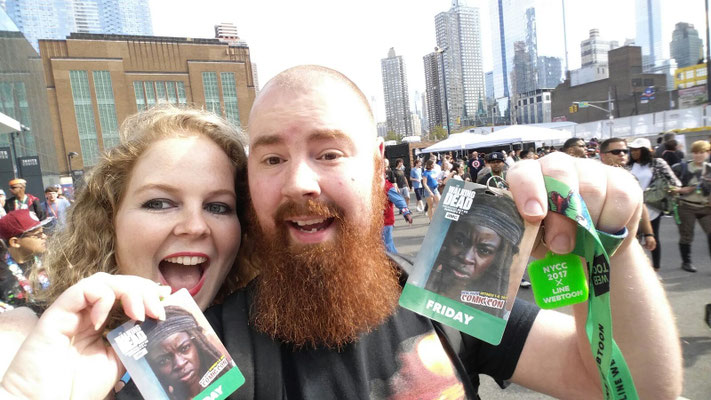 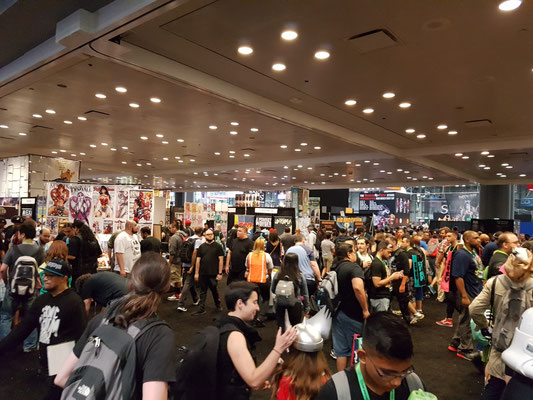 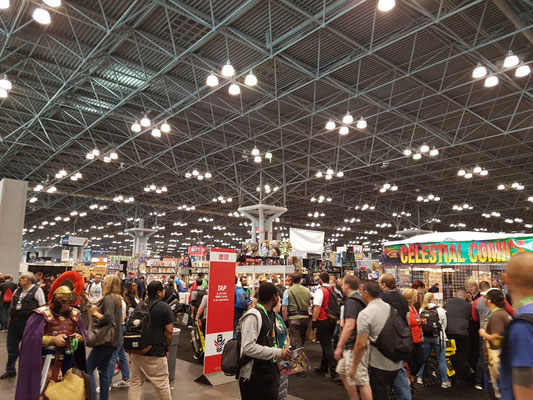 The guests and the panels

Looking at the very impressive guest list of last years, I had major expectations! Already before the con though, I learned why their guest list is that big. A lot of the guests just attend 1 panel. So, they're on the guest list but they are not signing autographs or doing photo ops. They just attend one panel. That might even be on a day you're not attending. When you don't attend the panel, you won't see the guest at all. That was a bit disappointing to me. They were some guests signing & going photo ops. But most of the guests were just there for one panel.

Having said that, let's talk about the guests and panels. I didn't do any photo ops/ autographs with the guests at the specific autograph/ photo op hall. I'm not even sure why. It was a combination of lack of time and I thought the prices were too high (Mark Hamill was asking 250 dollars for an autograph. I believe Michael Rooker asked 60 dollars for an autograph). On Friday, I didn't even see the autograph hall until the end of the day. We had been so busy!

I did attend some panels. So let's talk about that. On Friday, there were 2 panels that I was interested in: the Dirk Gently panel and the Once Upon a Time panel. Good to know: New York Comic Con was held at the Javits center. There was the main stage for panels and several other panel rooms. But some panes were held at other venues: Hudson Mercantile, the Manhattan Center (Hammerstein Ballroom) and the theater at Madison Square Garden. The Dirk Gently panel was held at the main stage, OUAT in the Hammerstein Ballroom. For the Dirk Gently panel, you had to queue in the morning to tap your badge and get entrance. I didn't feel like starting the day queuing, so I decided not to attend the panel.

But around an hour before the panel, I saw on twitter that there was still some space (I thought it would be completely full already in the morning because you could reserve a seat by tapping your badge). Quickly I decided to attend the panel anyway. Sig joined me, but just before the panel started he decided to back to the show floor. They were going to show the first episode of season 2 and Sig hasn't watched season 1 yet. I liked the panel. And it was amazing to see the new episode that hadn't aired yet, at NYCC! However, it was a pity that just 10-15 minutes of the panel now consisted of questions. So it was a very short time to see the guests: Samuel Barnett (Dirk Gently), Elijah Wood (Todd), Hannah Marks (Amanda), Jade Eshete (Farah), Mpho Koaho (Ken), Fiona Dourif (Bart) and Ma Landis (creator). 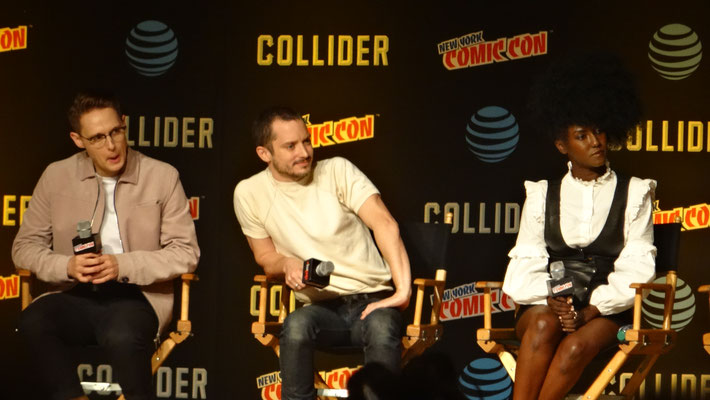 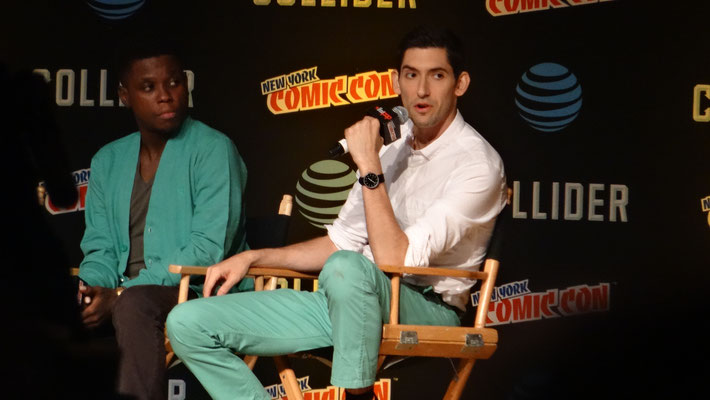 Later that day, we attended the Once Upon A Time panel at the Hammerstein Ballroom. The highlight of the day! I've been looking forward to seeing the 'Evil Queen' in New York. Sig joined me for this panel since it was in another venue. But again, they showed a new episode. We watched Episode 1 of Season 7. Sig hasn't watched OUAT, so for him, it was less fun than for me. I liked it, I'd rather have had more time for questions/ more time to see the guests. The guests for this panel were Lana Parilla (Regina/ the Evil Queen) and executive producers Edward Kitsis and Adam Horowitz. I could understand why this panel was held at the Hammerstein. The room was huge! And there were SO many people attending this panel. Just check the pictures below! 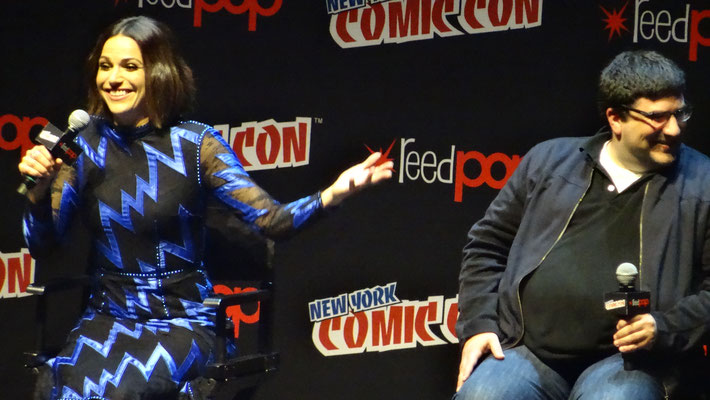 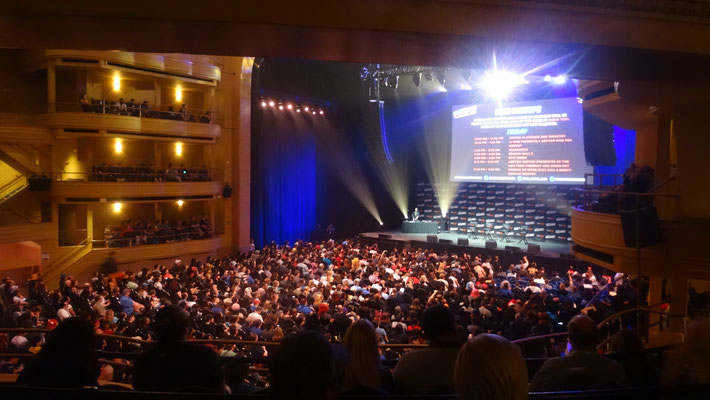 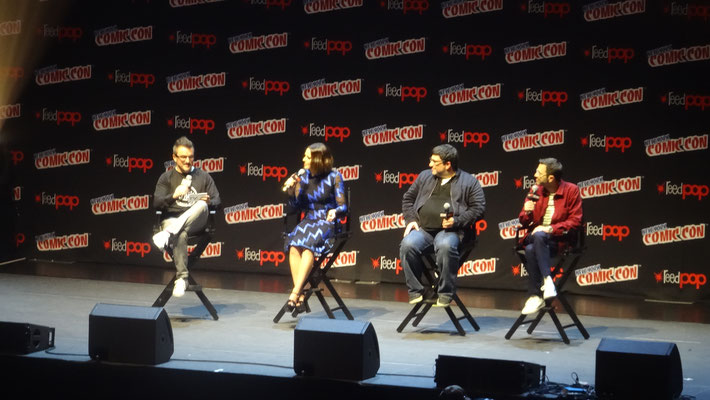 The show floor was huge! I mean like really huge! There were more hundreds of exhibitors. So there was a lot to see! And to buy ;). Sig will make a vlog again of everything he bought in New York. There were a lot of booths that didn't have anything I was interested in, and there was many with a lot of nice stuff. I saw many comics, Funko dolls, and figurines. I would have loved to see more DVDs :). Unexpectedly, I saw Alex Vincent on the show floor. He was doing autographs and photos! As a big fan of Chucky ( I also wore a Chucky shirt that day) I had to talk to him of course. I'll write about it in more detail later. Before the OUAT panel, I walked to his booth and got an autograph and picture! Sig also saw the booth of Troma and after the panel, we went to see them as well. Director Lloyd Kaufman was there as well and we chatted with him and also took some pictures. it was great to meet him and it definitely inspired us to write about Troma soon!

In the morning, it was nice to walk around on the show floor. But around 3 PM, it was way too buy. There were people everywhere. No space to turn around or to look at a booth without people around you everywhere. For about an hour, it was just too crowded to really walk around and be able to look at all the booths. The show floor was definitely impressive. After many hours of looking at the booths, we still hadn't seen everything. So there was still lots to do on Sunday! It was nice that there as a combination of game booths, comics, shirts, props, and figurines. There's a lot to see and we could spend all day here! 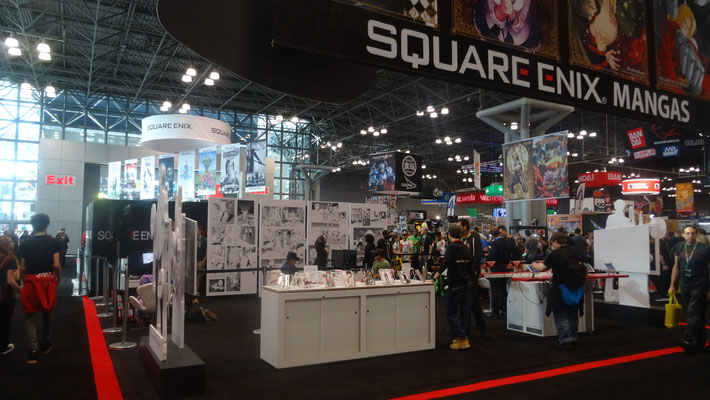 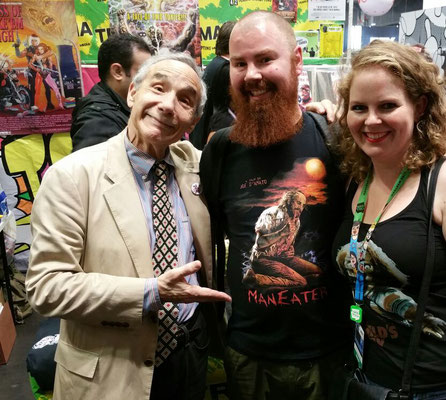 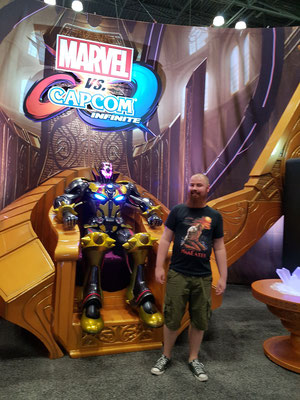 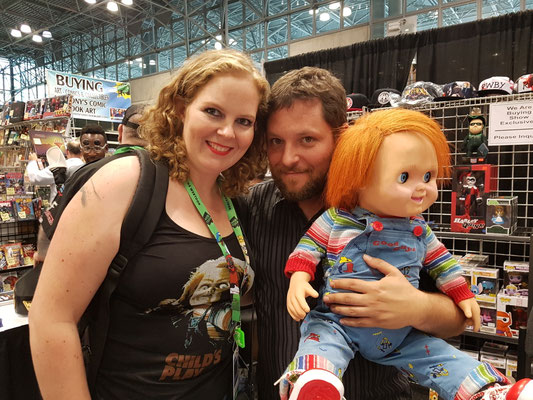 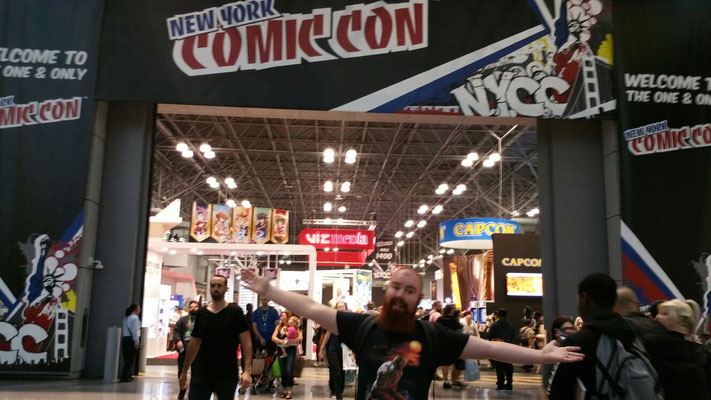 Because we were quite overwhelmed by the first day of comic con, we didn't eat or drink a lot. Usually, at a European con, we already have time for drinks and food. So this was definitely the case today. We did however found a small window of opportunity while waiting for the Dirk Gently panel. In the panel room (yes, in the room!) There was a hotdog stand! We took that chance and both ate a hotdog and drank a soda. The hotdog was very simple (especially for 5 dollars per hotdog), but we were glad just to be able to eat something!

We loved our first day at New York Comic Con! I'm not used to seeing complete episodes of a TV series during a panel so that was a new experience. I totally loved seeing Lana Parilla. The show floor was really, really impressive. It was huge. I have never a show floor like that. And there's just so much to see and buy. It was very crowded. On the other hand: I hadn't expected anything less than crowded for such a big con. A big plus for me was getting in the convention that fast. We almost didn't have to wait. Everything was very organized. Blocks away there was already staff guiding you o the con. At the con, the queue went fast. Security was quick & good. Scanning the badges went fast as well. All very impressive. There was a lot of choice in panels. Especially if you're not just interested in seeing actors but also want to hear about games, comics, cosplay and more.  The number of panels was huge. There were just only 2 that I wanted to see. And I'm glad there weren't any others. Because one day is not enough for this comic con! I was glad we would return on Sunday again!