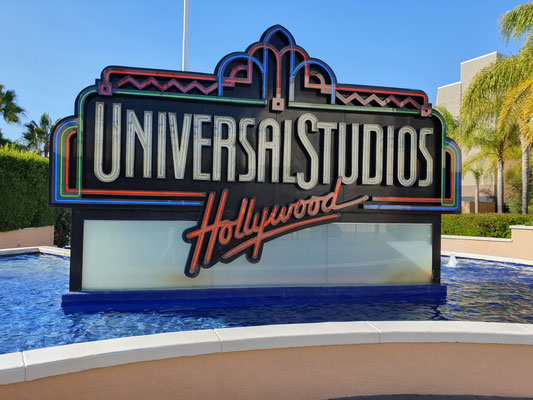 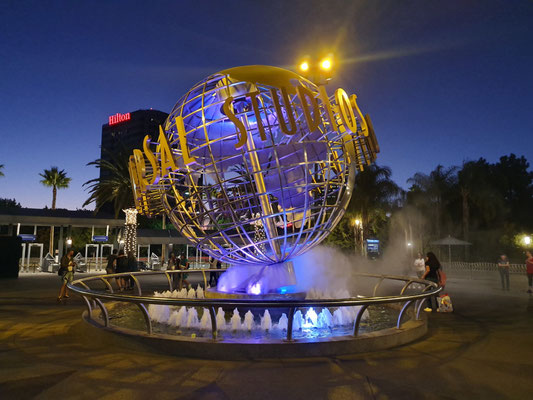 On our first day in Los Angeles, we already went to have a look at the Universal City Walk. I always love that, some nice streets with shops and food! But first: it was quite a walk to get there. At the Hollywood Walk of Fame, we took the metro to the stop Universal City/ Studio City. That didn't take a long time. Once we were there, it took us a moment to find out where to go. And the answer was 'up'! We walked up. Yeah, we walked. We didn't realize immediately that there was a shuttle train we could take to go up. But well, a little bit of exercise is always good (but tiring though!)

At the Universal City walk we of course bought some great things. Some movie shirts and way more! We also had dinner at the Universal City Walk and returned to the hotel after that. It was a great start and we couldn't wait to go to the park on Friday. 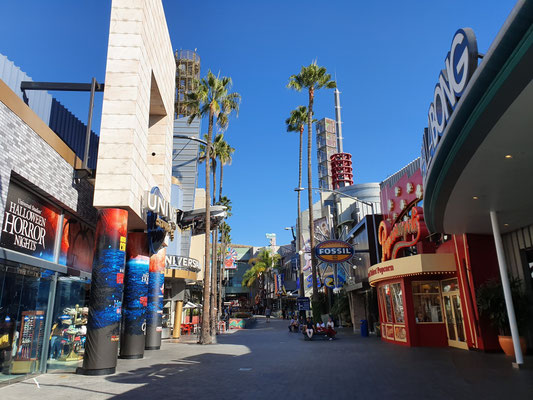 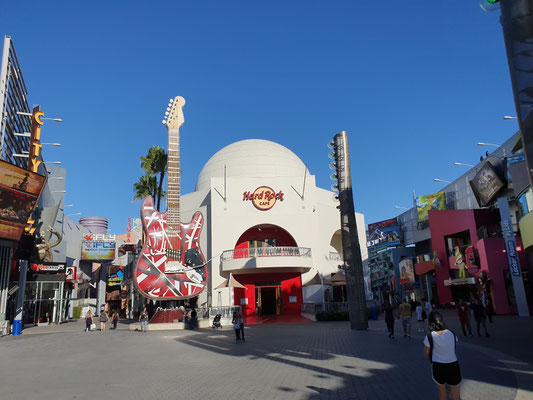 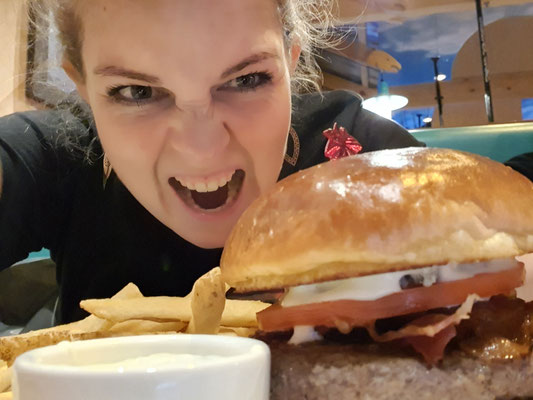 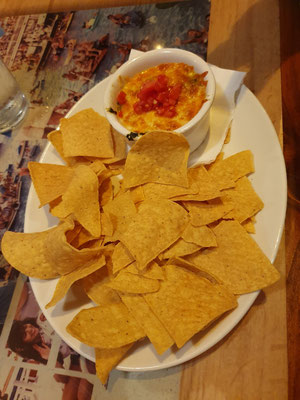 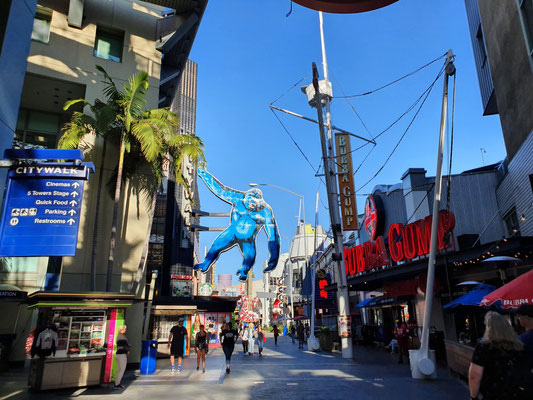 We left for Universal studios quite early (by Uber this time) and took the shuttle train up. That all went very quickly and also getting in with our L.A. Go Pass didn't take long. Yeah! We were at Universal Studios Hollywood. Even though I had read some predictions that it would be a busy day, I was so happy to be there and to get into as many rides as possible. When we started walking, we soon saw the DreamWorks Theatre Feature Kung Fu Panda. We decided to go in immediately since there was no queue yet. And it was a nice one! We enjoyed it a lot. Things I wanted to do during our day here were the Universal Studios Tour, the Jurassic World ride and the Simpsons ride. I have done the Simpsons ride in Orlando as well and really loved it!

Right after Kung Fu Panda, we saw the huge Harry Potter castle close by and decided to have a look. It looked amazing and it was great to walk around a bit and see all the Harry Potter Themed shops, restaurants and more! Of course, we wanted to soar above Hogwarts with Harry Potter so we decided to queue for Harry Potter and the Forbidden Journey. The waiting time showed 40 minutes, but we decided to go for it anyway! Eventually, waiting time took longer, because of some problems with the ride. But Liv & I were very used to waiting, after waiting for over 5 hours at the premiere of Zombieland: Double Tap the day before. So this, this was peanuts haha! And while waiting, we also received a nice e-mail from L.A. Comic Con. You can read all about that in the article about L.A. Comic Con Saturday! The ride was worth the wait! I totally loved it. I am not going to explain exactly how the rides are, get that experience for yourself. That's way more fun ;). I just really enjoyed flying above Hogwarts! 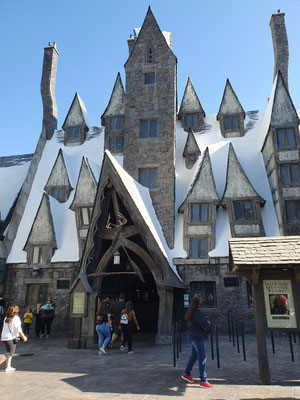 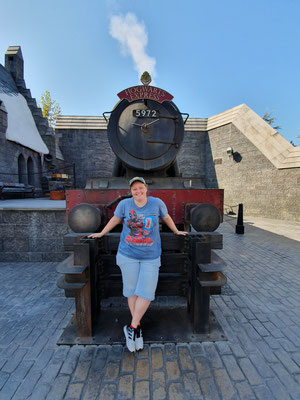 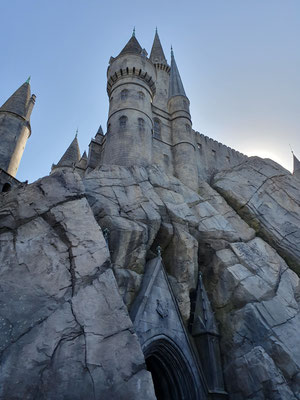 After flying above Hogwarts, we were ready for a drink and something to eat. A great looking American milkshake caught my eye and I went for it. Ooooh, it was so much. But so delicious. And it looked so good! And of course, as I also ate something. Some fries and chicken! But we didn't spend much time eating & drinking. We had things to do! Off to the next ride. And that would be.., the Simpsons! First, we enjoyed the Simpsons theme and looking all around. I loved this in Orlando too and Hollywood is just as great. I just love how colorful everything is! The estimated waiting time for Krustyland was about 30 minutes. I knew this ride was worth the wait, so we started queuing. And this time we were lucky! The waiting time was way less and very quickly we were enjoying the Simpsons ride. And it was amazing again. 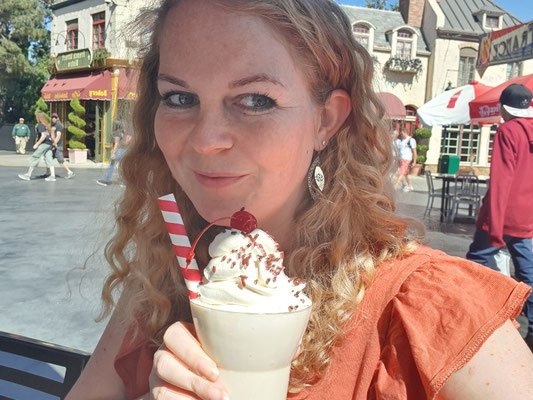 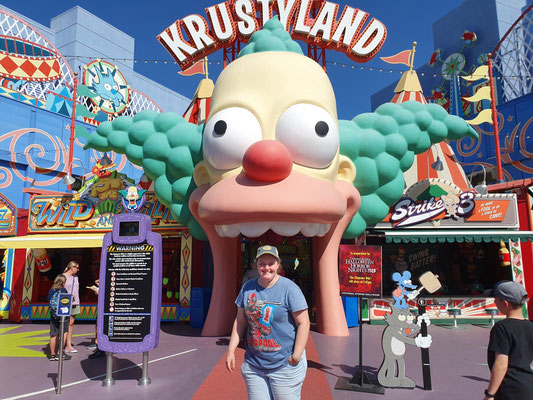 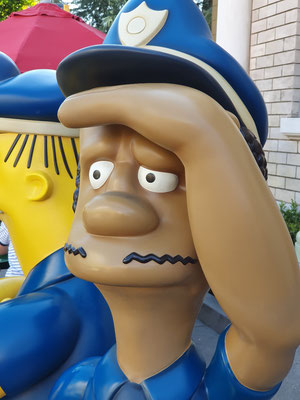 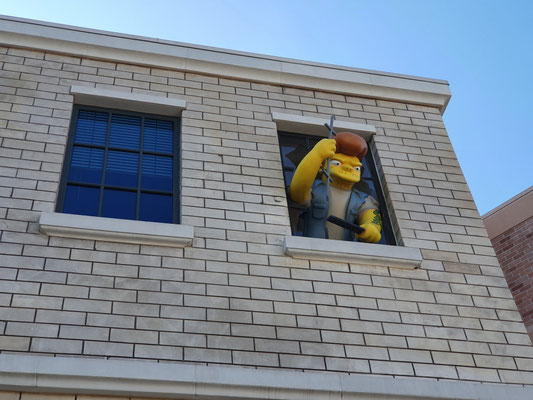 We were sure we wanted to do the Universal Studio Tour, so we decided to head over there quickly. We wouldn't want to miss out because we were too late. So we made sure we went in time to be able to do the tour. We enjoyed the Warner Bros Studio Tour 2 days before and couldn't wait to see what Universal had in store for us! And it was quite a different tour. Though I really liked doing both! We all got 3D glasses while queuing... Exciting! We didn't have to wait long, after a short while we could take place on a train which toured us around the studio lot. We kicked off by driving by some amazing posters. I loved seeing all of them.

The tour was very diverse. That's what I liked about it. We saw some studios, filming locations, some cars, a few 3D videos/ effects and some demonstrations of how they create for example rain or an explosion. That was all very impressive to see. I really liked seeing the cars. There were some Back to the Future cars! I love BTTF, who doesn't! (A few years ago, we met Christopher Lloyd!!). And the cars from the Flintstones (yabba dabba doo!!), 2 Fast 2 Furious and Jurassic Park cars.

It was also great to experience some heavy waters, see western filming locations (including locations that were used for Once Upon A Time in Hollywood!). We saw an explosion, the house from Psycho (That was great!), a filming site for War of the Worlds and way more. The studio tour was great. I like that it's a part of the Universal Studios Hollywood park.

Oh yeah! Our day was awesome. We had already done so many things. And everything was fun. We still had a little bit of time. And now, on top of our list was Jurassic World - the Ride. It was quite a walk, but it gave us the chance to talk a bit more and enjoy the sun and the park. Everything looks really nice and I loved walking around in Universal Studios. Jurassic World also had a long queue. I think we waited for about 40 minutes. But it was a ride to remember. A water ride! And I always get a lot of water splashed on me with this ride. And it definitely happened now as well! Luckily the weather was great haha. The overall ride was amazing, very well done. This one was Liv's favorite.

My favorite was the Harry Potter ride. We thought this would be our last ride since we had been waiting for quite a while. But nope, we had time for one more. We didn't think twice and got in line for the Revenge of the Mummy ride quickly. This was also a long wait, but worth it as well. This ride is really surprising. I had already done it in Orlando but forgot about it. And I'm glad I did. This way, the ride surprised me again! I loved it and it's amazing we were still able to do 2 more rides after the Studios tour. After the Mummy, we walked towards the exit, visiting some last shops in the park. We had an awesome day and celebrated with an awesome dinner at the Universal City Walk! Have you ever been to Universal Studios? Where?