In our "Insights" articles we go behind the scenes of the convention life. We talk to people who organize conventions, sell merchandise or DVDs, Cosplayers, Costume Groups and more. In earlier articles in the series we already talked to: The Dutch Fredette, KLZ Events, Zeno Pictures, Dirtees, Ghostbusters Dutch Division and more! "Doctor Who" fans, we have something for you! Today, we're talking about Dutch TARDIS.

We spoke to the people of Dutch TARDIS at Dutch Comic Con Spring 2018. It was a lot of fun and we spoke about doing an interview. Dutch TARDIS is an amazing group, so we were excited to be making an article. So we talked further online and here's the result!

Let's start with introducing the group.

Dutch TARDIS started off in 2015 as a crowd funding project between the Dutch Time Travellers Association and Imagicon.

They wanted to create a place to meet fans of the same fandom and some promotion for both of the parties.

The goal of the group is to be a meeting point for other "Doctor Who" fans or to introduce the show to people who don’t know it yet. Besides this we want to make people aware of the DTTA and Imagicon.

Dutch TARDIS has 4 core team members (Geoffrey, Berbel, Lisette and Wim) and a lot of volunteers. Without the volunteers there wouldn't be a Dutch TARDIS. 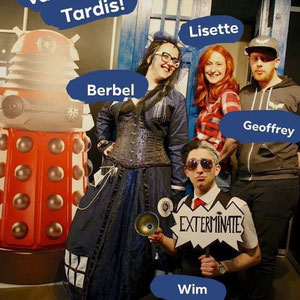 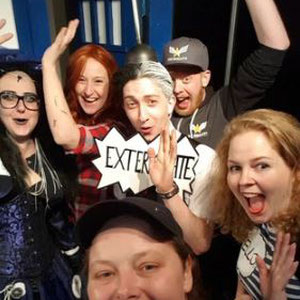 Like we mentioned, we spoke to the members of Dutch TARDIS at Dutch Comic Con. So we asked: Which kind events do you usually attend?

"Most of all, we attend Fantasy and ComicCon Events. The TARDIS can be hired for parties and events too, just sent us an E-mail."

And when pick the events to attend, or get requests to come to an event: What is important for you? What should an event be about?

"The visitors have to have an connection with contemporary fandoms, we want to be an addition to an event."

What do you usually do with the group at an event?

"People can get their picture taken for free next to the Dutch TARDIS, we usually have a table with homemade articles and little jewelry. All profit is to finance, maintenance and transport the TARDIS. We are brainstorming at the moment what sort of activities we can add."

And since you've done already quite some events: What's the best memory of an event you've attended with the group?

Berbel: Personally I just like the interaction with other fans and I really enjoy to see doctor who cosplayers

Lisette: My best memory is at ComicCon Amsterdam 2017, when Samual Anderson (Danny Pink) showed up at the TARDIS in his free moment, and made time for us.

He put his autograph inside de TARDIS, made free photo’s with the fans who where there, and I got a big big hug from him, I still love that hugging photo so much

Wim: My best memory was the first time I helped building up The TARDIS on Animecon 2017. I got to put the Lamp on in my cosplay, and that just felt so brilliant. That will be a memory I will always cherish." 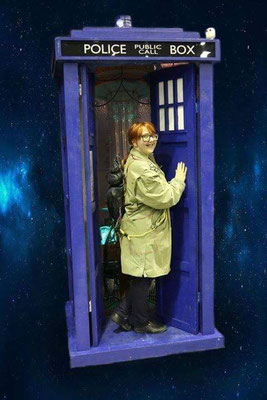 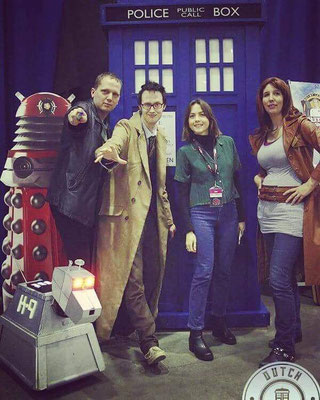 Let's talk about Doctor Who

Of course we can not do an interview without talking about Doctor Who!

Let's start at the beginning: When did you start watching Doctor Who?

"Geoffrey: To be honest… I’ve never seen a single episode

Berbel: About 5 years ago

Lisette: About 3 years ago

So... Why Doctor Who? Can you tell us about your passion for Doctor Who?

Berbel: I like the quirkiness of it, I like that it is a British Sci-Fi and no need for gore and bloodshed. It has humour and I love that it has so many layers, that there are references to thinks that happened two years later that only fans who re-watched can notice.

Lisette: It’s British, I love British, Lots of familiar actors who come along the road, and you never know what u get. One time you be on earth, next time on new new earth.

Wim: He is not your average Hero. He is not a Batman or a Iron Man, He is a Doctor, a healer, a caretaker, I really like that

We're always curious to hear about preferences people have for a specific doctor. Who's your favourite doctor?

Geoffrey: Don’t really have a favourite, but if I have to choose I’ll choose 10

Berbel: I am a new who girl, not really into classics, But I really can’t choose, They are all the Doctor.

Lisette: 9 made me whovian, but my favourite is and will be 10.

And can you tell us about your Doctor Who cosplays?

Berbel: I made my “Lady TARDIS” costume 2 years ago. And made my version of Donna Noble from the “Turn Left” episode incl. Time beetle.

My 12 year old daughter had an Osgood and Dalek cosplay

Lisette: I started with Osgood, but most people know me as Amy Pond at the TARDIS, and I have an “Adipose” Donna cosplay.

Wim: My first and only Doctor Who cosplay is an outfit made for my Doctor Who Fan Series: The so called 14th Doctor from The Netherlands. 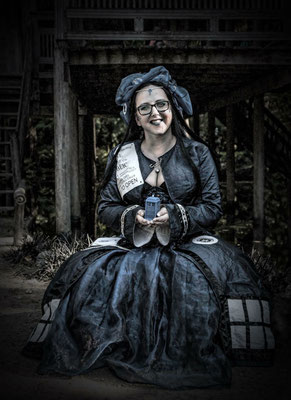 Comic Cons often have star guests as well. I already saw some pictures on your Facebook page with actors from Doctor Who. So when there is a Doctor Who guest at a convention, do you go

and meet them for an autograph and/ or photo op? Or do they usually come over to your stand?

"Sometimes they come over by themselves, but most of the time we go to them and invite them to visit the TARDIS.

And which actors or actresses from Doctor Who have you met already?

With exception of Camille they all have put there autograph in the TARDIS!"

Which actor/ actress would you really like to meet?

"Berbel: I would love to meet John Barrowman one day.

Wim: I would really like to meet Tom Baker or John Leeson (The voice of The Doctor’s Robot Dog K9)" 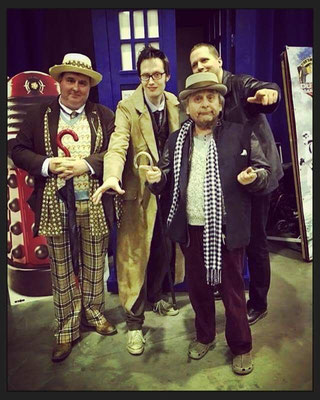 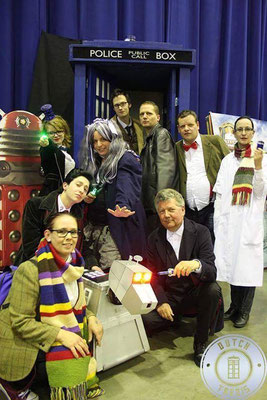 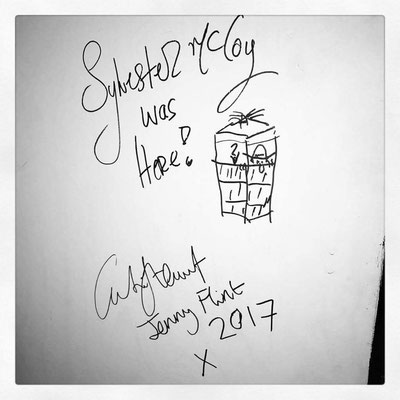 We are so happy to you wanted to work with us on this interview. We loved getting to know you and the Dutch TARDIS group a bit better. It's really awesome and we hope you'll be attending lots of great comic cons!  So thanks a lot! A few last questions:

Is there anything else everyone should know about your group?

"It’s a Non profit fan group made out of all volunteers. If you are a whovian you’re welcome! It really is a big family."

Which events will you attend this year?

"We are planning to attend ComicCon Amsterdam, Doctor who Gathering and Winter Dutch ComicCon this year."

A last, but important question: How can people follow you?