Whoooooop! As you might have read on our Instagram or Facebook pages, we went to HOLLYWOOD! Yeah, seriously! We went to Hollywood.  During our time in Hollywood, we couldn't miss the chance of course to visit Madame Tussauds! In 2017, Liv and I already visited Madame Tussauds in Amsterdam. We had so much fun there! (And in 2016, I visited the Polonia Wax Museum). So you can understand: We couldn't miss the chance to and have fun at Madame Tussauds Hollywood. And I can tell you: We did have fun! Lots of fun! Let me show you.

The illusions of horror

Let's start with horror. Oooh we do love a good horror movie. And to get a great picture with som true horror icons.... we wouldn't miss that for the world! and it was one thrilling adventure. Liv bit Dracula in the neck, we almost floated and we were almost burried as mummies! Just watch the pictures and you'll understand the terrors we've been through!

We love the 90s!  I mean: We LOVE the 90s!! Those were the days! And Madame Tussauds Hollywood has some pretty amazing 90s icons! What a big party! From Cameron Diaz (It's been so long since I watched 'There's Someting About Mary') to Britney Spears (In the Hard Rock Cafe Hollywood we saw her clip again of Toxic) and typical 90s bedroom (admit it, your room looked just like this one). And there was way more of course. Take a trip down memory lane with us... And experience the 90s again!

Country Western time! This was our change to see Clint Eastwood, John Wayne, Paul Newman and more! So, put on your cowboy hat. We're going western!

Modern classics! Who doesn't love them? We screamed a bit (a bit?? HAHA don't make me laugh) when we saw the Grease car with john Travolta. You might not know it, but Liv & I are HUGE Grease fans. Besides Grease we were super excited (excited is an understatement) to see the other classics in Madame Tussauds Hollywood. I've seen so much of Forrest Gump in LA, this was truly the cherry on the cake (And.. check out my shirt!). I was a bit afraid of Rocky ( You can't tell right?) and I always dreamed of Edward Scissorhands cutting my hair!

There were also a lot of music opportunities. Liv & I love to sing and dance (You might have noticed that on our Instagram and TikTok account haha). So we loved getting some pictures with true music icons! It was great to see Jennifer Lopez, Madonna, Michael Jackson and way more others.

Making movies. If Excited wasn't already an understatement, it would be now! I mean: Quentin Tarantino, Jack Nicholson, Marlon Brando: These names already say enough right? And that's just a small part of the really cool wax figures we got to see in this area. I enjoyed having a fight with "the Bride", after begging the Godfather for my life. Only so that I could help Steven Spielberg with his next movie ;).

Superheroes! This was a big surprise when we were almost done at Madame Tussauds. As a last part, we got to see some awesome superheroes. Of course here, we took the time as well to make some awesome pictures with them! We're ready now to save the world!

Nooooo this wasn't all, of course we saw way more celebs and WAY more pictures. Just have a look below at the great wax figures we also saw at Madame Tussauds Hollywood. We saw Harry and Meghan, served some drinks to Brad Pitt, screamed real loud for mr. Hitchcock, had breakfast at Tiffany's and more! It was awesome to see Obama, James Dean, Morgan Freeman, Meryl Streep and way more others. And you know... HEEEEEEEEERE's CONMOSE!

Our visit to Madame Tussauds Hollywood

I think it's quite clear from the pictures: We had an awesome time at Madame Tussauds in Hollywood!! And as you might know, there's 1 thing that always makes us EVEN MORE excited. A ball pit!!!!!!! After having so much fun in the ball pit of CCXP, I didn't even imagine I would get into another ball pit this year. It's amazing! We really enjoyed Madame Tussauds a lot and can't wait to visit another one! 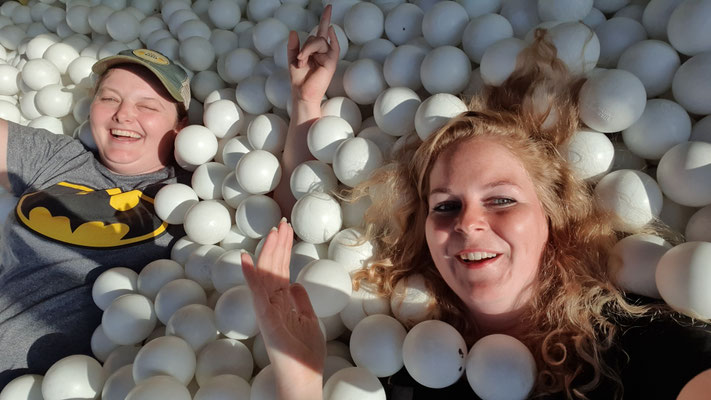