We went to Los Angeles. Liv and I went to Los Angeles! I still can't believe it. It was amazing! And the best thing is: A part of our trip to Los Angeles was attending Comic Con Los Angeles! Oh yeahhh! With confidence, I can call us both true comic con addicts for sure. We go whenever we can, wherever we can. All day, every day. We could live on comic con. That's why we definitely couldn't miss out on going to Comic Con Los Angeles during our stay there. I mean seriously..... We had to go!! We already knew that a long time ago. When we found out comic con was around the time we would be in LA, we knew we were going. As soon as the tickets went on sale, Liv & I both bought a 3-day pass (because there's no such thing as too much comic con!!). Eventually, however, we went 2 days, not 3. Because hey, there's SO MUCH to do in LA!! And if you think we were excited about comic con, well let me tell you: Excited is an understatement! 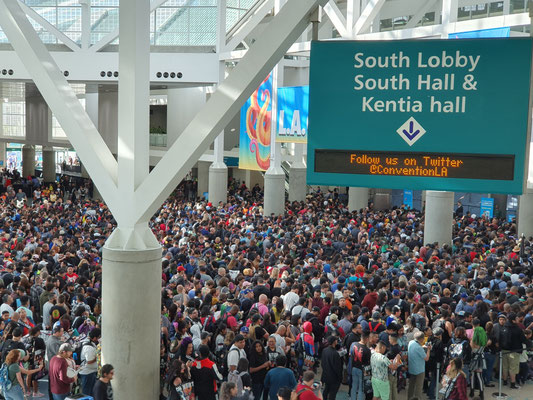 In the morning, we decided to leave early from our hotel. We still needed to get the badge, so we had to be there on time! We walked from the hotel, it was a 20-minute walk. We arrived at the Los Angeles Convention Center pretty quickly and found quite a long queue there! We got in line and we were surprised to notice that the queue went super fast, also getting the badge and later getting into the actual comic con all went quickly! (So, no reason for comic con irritations here!)

The day before we had received an e-mail from Comic Con Los Angeles. It said: "Attend an exclusive free advance screening of Zombieland: Double Tap." SAY WHATTTTTT???? After waiting for hours at the premiere of "Zombietap" (you'll hear all about this in another article). ABy the way, that's how I call the movie. I mean: We said the title A LOT during this holiday and I don't have all day, so I shortened it into Zombietap! We were pretty excited about the movie. So Liv and I were jumping up and down in the queue at Universal Studios (that's where we got the e-mail). And filled in the form instantly. The rest of the day consisted of having fun at Universal and chasing WiFi to see if our spot had been confirmed.

On the morning of Comic Con Los Angles I read that to guarantee our seats, we had to show the e-mail at the info booth and redeem a wristband. So, surprise, surprise: What was the first thing we did at comic con? Exactly! We went to the info booth. Because.... The e-mail about the screening also said "Make sure to arrive early. You never know who might show up". And well, if you say that to us, our brains go into overdrive. (Who will be there???) We rushed to the info stand and we redeemed our wristbands. A good start of a good day! 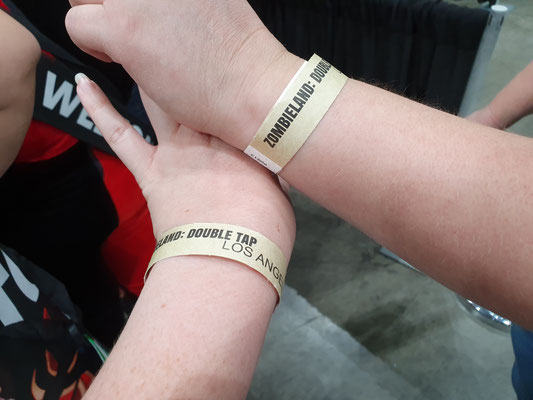 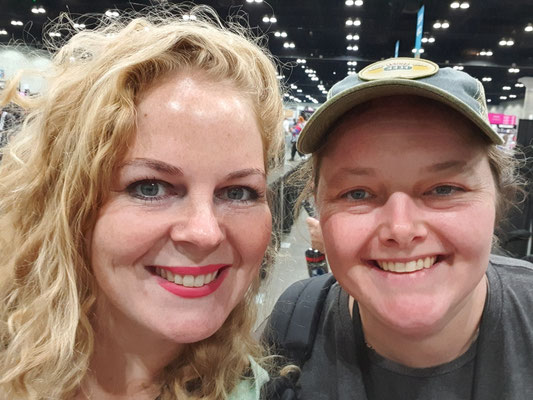 After getting our wristbands, we were ready for Comic Con Los Angeles! We would have a busy day. There were a lot of panels we wanted to attend and we had to 2 photo ops. Our schedule looked like this:

As you can see, it's a very busy schedule. Really busy. And there's even some overlap: Because we had a photo op with Ron Perlman, we would have to miss the start of the "Zombietap" panel.

Getting an autograph and selfies!

We were excited and happy to be at comic con. We started walking around a bit. That always leads to us checking out the autograph area. Not all the actors were signing yet, they all had time slots. So some started early, others later. We did see Barry Bostwick (known for the Rocky Horror Picture Show, Spin City and more) there already, signing. Liv was enthusiastic and decided to go for an autograph and selfie right away!  How's that for starting a day great? Zombietap? Check! Autograph? Check! Selfies? Check! I won't go too much in-depth about meeting Barry right now. We will write a separate article about meeting him! I'll just say that it was a lot of fun. We had quite a long talk, about comic con and the roles he played. And I made a picture of him and Liv. And then he even said I could go in the picture as well, and we made some more! Barry was great and this was only the start of Comic Con Los Angeles for us. Excited is an understatement! 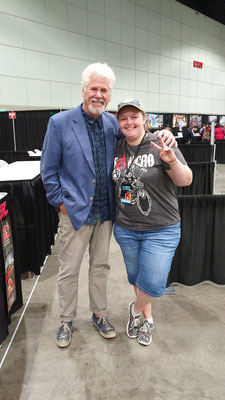 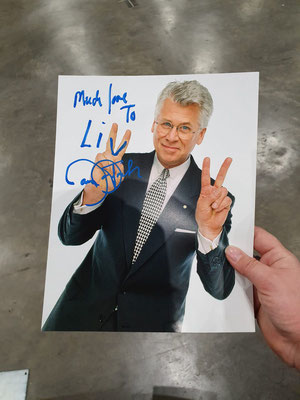 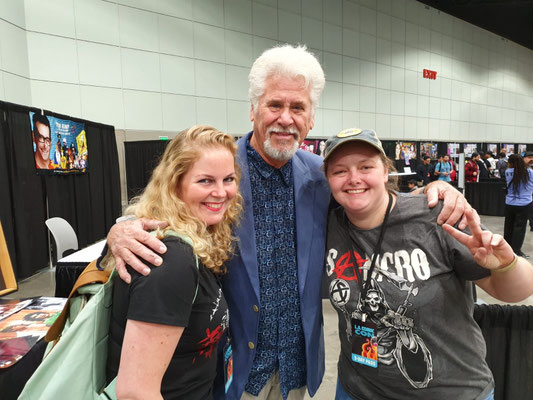 Taking care of ourselves and being naive

And then we got smart. Like really smart. Usually, we forget to take care of ourselves and we barely eat or drink all day. For this comic con, we were already smart to start with. We brought a bottle of water! And after getting an autograph from Barry with some great photos, we decided it was time to eat. Because if you look at our schedule, there's not much time after 12.00! So we had to eat early. We both ate nachos with cheese (cheese always makes my day. I love cheese.).

After enjoying these awesome nachos with cheese, we went to see the "SpongeBob Squarepants" panel (with Tom Kenny and Bill Fagerbakke). But we were not just smart. We were also naive. We were looking forward to all these panels. To sit down, relax and enjoy the panels.

Arriving at the main stage, we lost all our naivety: We couldn't sit during the main stage panels.  And it was very busy! So we walked around, looking if this really was a standing panel. And yup, we had to stand. Almost everyone was standing. This made these panels a bit harder to see and to follow. With a lot of people standing before you, you're more or less tiptoeing to see something. Nevertheless, it was great to see the "SpongeBob Squarepants" panel. But there, reality also kicked in. After just a half-hour of standing, my feet already hurt. Standing still, tiptoeing and concentrate on the panel had been tough for our feet. I was happy that we needed to get our photo op with Elijah Wood. 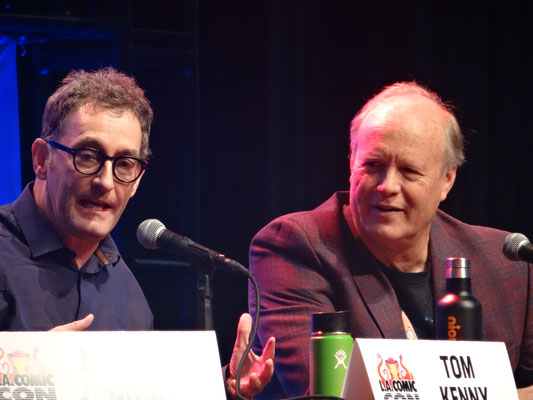 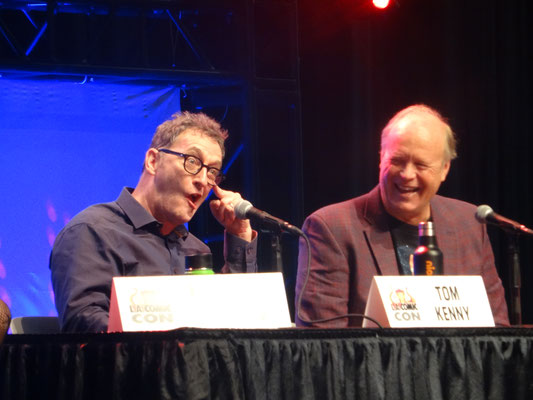 Did I say, Elijah Wood? Yeah!!! ELIJAH WOOD!! I had "seen" Elijah Wood before Comic Con Los Angeles already. In 2017, I went to New York Comic Con and there he was a part of the Dirk Gently panel. I went to the panel, but I had a seat in the back. So I can say I was in the same room as Elijah Wood (and Hannah Marks, Jade Eshete, Mpho Koaho, Fiona Dourif and Ma Landis). The panel in New York didn't take very long (but we did get to see the first episode of season 2 of Dirk Gently!). So I saw Elijah from a distance, for a short time. But make no mistake: I was so happy. I thought that was as good as it would get. I had never thought I would actually be able to have a photo op with Elijah. (The same goes for Lana Parilla, who I also saw from a (big) distance in New York, but later I had a photo op with her in The Netherlands)

Yet again, excited is an understatement. Nervous is also an understatement! The photo ops were well organized and waiting didn't take too long (awesome!). But we were so nervous to meet Elijah! I am so happy we did the photo op, Elijah was great and I love the photo. After this great experience, we went to see some more panels: "The Office" Reunion panel (with Leslie David Baker, Creed Bratton, Kate Flannery, Phyllis Smith, Oscar Núñez and Brian Baumgartner) and the SpectreVision panel about their movies. I loved both panels and was amazed about popular "The Office" is. In The Netherlands I don't know that many fans of "The Office". But the panel at Comic Con Los Angeles was (as far as I have seen) the busiest one. It was super, super busy. I absolutely enjoyed it though. I'm a big fan of the series. It's been a while since I've seen it and seeing them on stage brought back all the "Office" feelings! When this panel ended, we were exhausted! We had also planned to see the Jay and Silent Bob panel, but by then (and way earlier already) our feet told us otherwise.

Sit down and enjoy the sun

Our feet hurt. They hurt badly. We skipped one panel and went to sit down. We needed this. We both looked at each other: We're getting old. Luckily, there was an outside area. We sat down, enjoyed the sun and had a drink. If your feet hurt, how bad can it be when you can sit in the sun with 31 degrees Celcius, with a cold drink? Exactly! No complaining (okay, okay: Right then and there we might have complained a little bit about how much our feet hurt.) Checking out the merchandise would be something for tomorrow. Today was all about our busy schedule. Seeing panels, doing some photo ops and... Zombietap! I couldn't wait to see "Zombieland: Double Tap". Anything to sit down for a bit! (and of course, we were curious to see the movie!) But now, we didn't have a lot of time! We didn't want to miss out on the "Hellboy" panel (with Ron Perlman and Doug Jones). We did skip the "Dark Crystal" panel after that though (with pain in my heart, but more pain in my feet). We just couldn't handle standing more. But then, it was time to have our photo op with Ron Perlman. Oh yeahh! We are big fans of "Sons of Anarchy" and just couldn't wait to get this picture. Waiting here took a while though and we were kind of impatient (we were hoping to see a bit of the "Zombieland" panel, before going to see the movie).

All in all it didn't take too long and the "Zombieland" panel started later anyway. We enjoyed the photo with Ron. We were still in a hurry though, as we also had to go the movie screening in time and didn't know exactly where it was (we're not that familiar in Los Angeles). So we had a quick look at the main stage to see who were in the "Zombieland" panel (It wasn't announced who would join). Of course, we were hoping to see Woody ;). Unfortunately, he wasn't there, but a lot of other cast members were! We didn't stay for the panel, but headed over to the movie screening, hoping we would see them there. (And did we? Read all about later it in our" Zombieland: Double Tap" article! Coming soon!!). That was the end of our first comic con day in Los Angeles. We enjoyed it a lot: Good food (cheese!), great photo ops and awesome panels. We didn't see a lot of the exhibitors & stands but hey, that's why we would return on Sunday. But now, it was time to give our feet some rest, sit back and enjoy "Zombieland: Double Tap!" You will read ALL about that in a later article!