Excited is an understatement! That's our tagline and many of you will have seen Liv and me in this state. Usually we're super excited (understatement!) , happy and energetic. Especially at comic con. But... there are moments when we're not that excited! Yes, it happens. Even at comic con. So today, we will discuss our top comic con irritations and of course, we'd love to hear about yours!

Well, if you ever see us at comic con, not looking all that happy, I bet one of these things happened!

We're queuing. For a photo op with Nathan Fillion. Excited is an understatement. You'd think... But not this day. Not in this queue... We we're at FACTS. We've looking forward to this photo op for weeks! Liv and I are excited to meet Nathan Fillion. I've watched Castle like crazy. We're so ready! But the queue is long. Too long. Extremely long.. And not moving. Not at all. In the meantime, time ticks away. Not slowly. Quickly. We see the time passing by. Passing by until it's time for Ben McKenzie's panel. WE ARE MISSING BEN'S PANEL. NOOOOOOO. We had a great mood. It changed when we realized we might miss Ben's panel. It took a turn for the worse when we realized Ben's panel started. And it got even worse when we realized we would never make it... We were just standing there! Waiting!

Believe me: I'm not difficult. I don't expect a comic con life without queues. I'm not that unrealistic! Queuing is actually not necessarily a bad thing. I've had great conversations in queues . Even made friends.

But seriously, there's a limit to how long a queue can be fun.. And let me tell you, It depends on a couple of factors. It's not just the length of the queue! What you need to take into account is:

When you have a tight schedule, there's not much time for queues that take too long. Also, when comic con has almost ended, I don't want to spend my last minutes queuing! And is a guest too late for the photo op (Like over 30 minutes late)? So frustrating!!!

Someone, please tell me: Why, why, why, why would you sit in a panel if you're obviously NOT interesting in ANYTHING that's being said?. Seriously, go away then! Unfortunately it's the harsh reality during a lot of panels. Especially smaller panels before a bigger one. People tend to get in early to get their seat already for the busier panel. But hey, do you think they realize they're actually joining another panel by doing that? Nooooooo of course not. they're too busy discussing what they ate, how they slept, or gossiping about what their friends are wearing.

Seriously, do us one favor and don't talk during panels!! Just join panels you're genuinely interested in what an actor or actress has to say. A panel is not:

A panel is... a panel! A moment to listen to some actors/ actresses and ask your questions. Please make sure that the people who actually want to listen, can listen.

Liv and I have been roaming around like a couple of zombies for hours and finally we realize we're once again forgetting to care of ourselves. Hurried, we go and buy something to eat! A waffle or fries are favorite! We queue, buy our food and then sit, relax and enjoy it.

Yeah sure, you don't actually believe that do you? Okay. The waffles and fries are not a lie. And the zombie thing isn't either. But the sit and relax part... definitely is! This is not just a comic con frustration, this is something that gets me frustrated whenever, wherever. What I mean? Well, People reserving seats!!!!! Oooooooooooh it drives me CRAZY. Let me explain: The queues are usually quite long. Then, you have groups of people where 1 person already sits down and reserves a whole table for the group. The group starts queuing. This might take up to 30 minutes (or longer). Meanwhile, we bought our waffles or fries and are ready to eat! But... we can it eat standing in a corner because people are reserving seats for their "group". In the time that their group is done queuing, we're done eating.

Seriously, I can't stand that! If everyone would not be so panicky about having a seat it would all be much better! Just have your seat when you need it. When you have your food. When you don't have it yet, let someone who has it, sit down and eat! And don't stay seated forever, just and and go back to enjoy comic con some more! Give everyone a chance to sit and relax for a moment and enjoy their food. 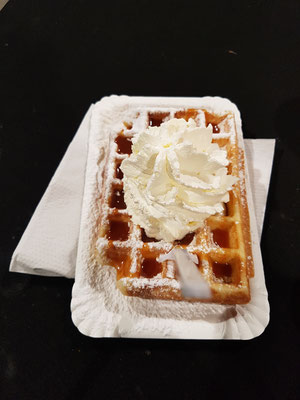 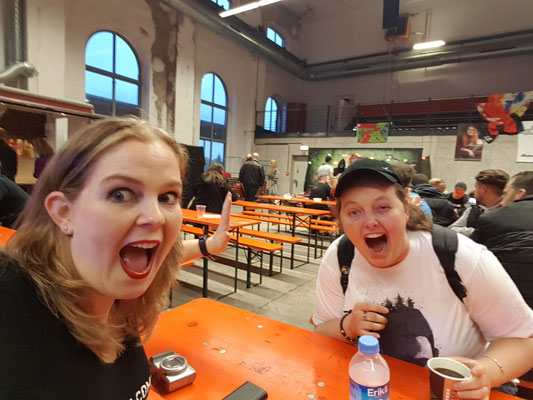 At one convention, Liv got a specific time frame for her autograph of Ben Barnes. And then.... when it was time to get an autograph, we went to the signing area. Full of confidence, we left the creators room and walked towards the signing area. We didn't see Ben immediately, so we just thought he was a bit late. Well, that's fine! We asked one of the volunteers, but her answer left us in shock! She told us that his autograph time had been moved to an earlier time. And that he had already left now. yup. Seriously! They sent an email to the people who had bought an autograph, but since Liv bought the autograph at the event, she didn't got an email.

I will skip the details:  All I can say is that thanks to the excellent volunteers, things turned out well for Liv! The autograph changed into a photo op (He hadn't left the building yet, he was first still doing some photos). And... Liv bought another autograph: For Mark Pellegrino.

But I think I made my point here: Sudden schedule changes can be annoying! I don't mind (that much) when the communication is clear. But all in all schedule changes are never fun. Some are terrible, some just annoying. But we all have to plan very carefully for comic con to not miss anything. One small change can mess up the whole day! And yes, this might sound dramatic. Let me be dramatic instead of excited for this once ;)!

I rushed through the entrance of comic con. Wondering: Where are the toilets? I ran in and out. Check. Where's the place for photo ops? I had ten more minutes before Sean's photo op would start. Liv and I walked around quickly to scan where I should be queuing. Ok, we found it! The queue was quite long. Liv was going to look around while I was queuing. I was standing there. Not feeling like I was actually there. It was warm. Hot even. I looked around and tried to realize that I'm actually queuing for a photo op with Sean. But I still felt rushed. And nauseous. We had a bumpy ride going to comic con. We left early because we wanted to arrive before 10 o'clock. Little did we know. We were driving for about 45 minutes when a light on the dashboard in our car started to blink. OH. NO.

I checked the meaning of the light. It meant there possibly was an issue with the brakes or the brake fluid. Ok, you can not take any risk with that. We stopped immediately. We called roadside assistance. They arrived within 30 minutes and fixed the problem. Yeah!! When we arrived in Utrecht, there was a long traffic jam. Then again problems started to rise. The car was getting warmer and warmer. And warmer. And like WARM. We had to enter a parking garage. And had to stand still on the hill there. I was freaking out. But: Finally, we parked and arrived at comic con.

Really, transport problem are terrible! It doesn't matter if you travel by plane, car, train or whatever: You can always have transport problems! This example was terrible, mainly because it totally stressed me out.

Next to that, we (mainly Liv) had our fair share of delays with public transport.... Liv's face here shows how much she likes that! Sometimes the delays are really bad. On the way to comic con it can mean you're missing half of the con (including photo ops, panels etc!).

On the way back, it might even mean you won't be getting home. Fortunately that hasn't happened yet, but it came close. Too close. waiting is stressful and especially when you're excited for comic con. I can remember so many moments of delay. Or running, because  a train couldn't go any further and we had to switch. Or standing with way too many people at a station waiting for a bus. Yeah, traveling can be horrible!

We love comic con though!

Let me end on a positive note. WE LOVE COMIC CON. Really. And you know us: Excited is an understatement. And of course, you can definitely have a great day no matter what. But just one moment of complaining... is just so great! So..... let us know: What's your biggest comic con irritation?