Well hello, it is time for another look behind the scenes of comic cons. A while ago we did an interview with Mark Dermul, the man behind the mic at the Guest Q&A's at FACTS (Ghent) and we loved the stories he had to tell. A few weeks ago, we had an epic time at the Winter Edition of Heroes Dutch Comic Con and we ran into Maurice, he is the host of (the panels) at Dutch Comic Con. Ever since the first edition, back in 2015, Maurice Wolbert is the man with the mic on the DCC stage and he is doing a great job.

When we ran into him at Dutch Comic Con, we asked him if he would be interested in answering some questions for an article and he immediately replied with "Yes, of course!". We agreed to mail each other and we asked him some questions to get to know him a bit better. Curious?  Well, let's get started and turn the tables on Maurice Wolbert...

As we already mentioned: we had an epic time at the latest edition of Dutch Comic Con. Ever since the first edition (in March 2015), Dutch Comic Con seems to be getting bigger and better. They always have an amazing guest list and a lot of other things to see and do.

Of course we asked Maurice Wolbert about his thoughts about the latest edition of Heroes Dutch Comic Con...

Maurice: "I think it was the best yet with so much fans and so much content. Everytime I think this is the best one and then they surprise me with new stuff."

The first edition of Dutch Comic Con was held in March 2015 in the Jaarbeurs Hallen, Utrecht. At that time it was the first big Comic Con event in the Netherlands. In 2016, the organisation decided that one Dutch Comic Con a year was not enough and the Winter Edition was organised for the first time in December 2016. At that time it was called the X-Mas edition, but in the years following the name was changed to Winter Edition. We were at the first ever edition of Comic Con and haven't missed an edition since then. That is one thing we have in common with Maurice, he has been there from the start. But how did he get involved in Dutch Comic Con?

Maurice: "Yes, I am hosting DCC from the first edition now. A good friend of mine (Ivan Lok), who sadly past away 2 years ago, created the first Dutch Comic Con. I just asked if he needed a host, and that's how I got the job."

We have seen the event grow bigger and bigger every year. Are you involved in other aspects of Dutch Comic Con (besides hosting the panels)?

Maurice: "No, not anymore and I like it that way because I can concentrate on the Q&A's for 100%"

Over the last couple of years a lot of big names in the world of movie and TV made their way to the main stage of Dutch Comic Con. From "The Walking Dead" to "Once Upon a Time" and from "The A-Team" to "Game of Thrones", Maurice Wolbert had them all on stage. You mentioned that you like the fact that you can concentrate on doing the Q&A's. But how do you prepare for them?

Maurice: "To be honest, I never prepare my Q&A's. I did this once and the panels were horrible! I just try to watch a lot of movies and series, that the guests star in. If I prepare a panel, it wouldn't feel as natural as it does. Normally I do try to pick up the guests from the airport, so we can already have a little chat in the car. On the Friday before the convention we also always have a little get together with everyone."

Well, that sounds like a dream job; hanging around with some of the biggest names in entertainment of the past and present. But what, in your opinion, is the best part of hosting the panels?

Maurice: "I get to meet so many incredible people! For me it's a real treat and it feels like a little holiday..." We can imagine that, but what's the hardest part of being a host?

Maurice: "Well, the hardest part is trying to keep my voice clear."

Maurice: "That's a hard question. I had so many great memories with people like Michael Cudlitz, Emilie de Ravin, Jared Gilmore, Mark Ryan and Spencer Wilding. With some of them, I still have contact." 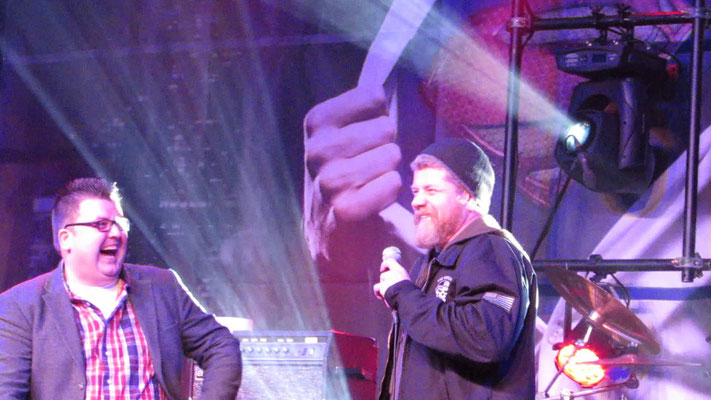 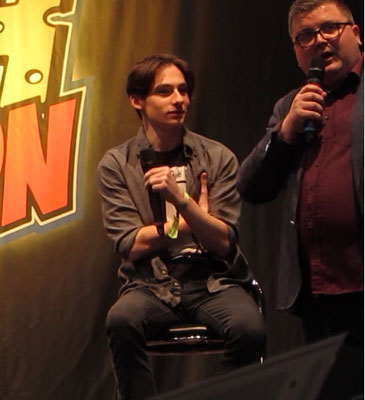 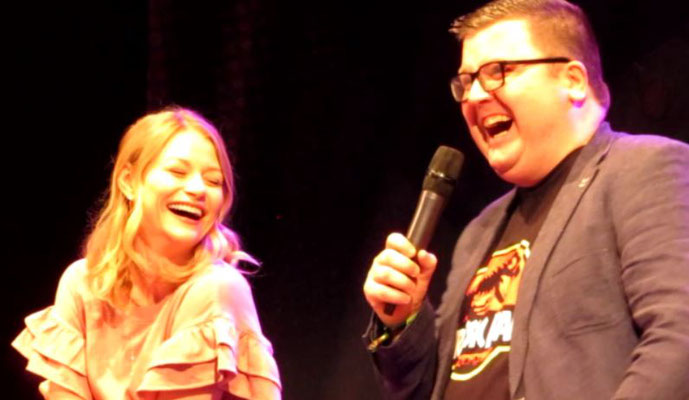 Hosting all the panels over the years, must have brought you some amazing memories. But what is the most memorable question anyone ever asked during a panel?

Maurice: "Well that's a simple question. That was during the panel with Emilie de Ravin (Spring edition 2018). I got asked a question instead of the guest. The question was what it felt like, sitting next to Emilie. My answer was a bit corny, but the audience laughed so hard when I answered that it felt like the Beauty and the Beast..."

That was a very funny moment and we do have a video of the moment. It was during the Saturday Panel of the 2018 Spring Edition of Dutch Comic Con and you can check it out below.

So let's talk some more about you. We know you as the host for Dutch Comic Con, but what do you do when you are not hosting panels at Dutch Comic Con?

Maurice: "Well, that is a good question too! I write news and reviews for the biggest Xbox gaming website in the Benelux...and I really love to walk with my dog Joep."

We at Conmose.com love everything about movies, series and conventions...what about you? Do you love movies and series too?

Maurice: "Yes, of course! Movies and series are the reason I am doing this. I'm an 80's kid, so I grew up with "Ghostbusters", "He-Man" and "The A-Team". I also love going to the movies, at least once a week."

We know it is an impossible question, but what are some of your favorites?

Maurice: "I like so much of them, I think I have a few favorites in every genre. Some that come to mind are the original Universal Monster Movies and the "Alien" series. But, I also like series like "Fringe", "FireFly" and "Game of Thrones"..."

And what about conventions. Do you attend Comic Cons yourself?

Maurice: "Sometimes, but I like it much more to host them myself... of course!"

So we have almost come to the end of the questions, but we do want to talk some more about what the future has in store for you...What are your ambitions for the future?

Maurice: "Hopefully, I can get more jobs in the world of media, like doing some TV and other stuff. Also, I would like to settle down..."

And what about Dutch Comic Con...who would you love to see as a guest in the future?

Maurice: "Pfff there are so many people, I would love to meet...but maybe Mark Hamill, Bruce Campbell and J.J. Abrams"

That is one fine list. If Mark Hamill ever comes, we would love to do an interview with him....just so you know ;)

And now, last but not least: our tagline is #Excitedisanunderstatement , but what are you excited about?

Maurice: "I am no professional host and I did not go to media school or something. Before Dutch Comic Con, I did not have any podium experience. I am excited about the fact, that I still get the trust and opportunity to do what I love to do at Dutch Comic Con. And all that for a small town farmer boy from Twente (a region in the east of the Netherlands).."

Well, Maurice: we think you do an awesome job and we hope to see you on stage for a lot more editions to come. We like to thank you for answering our questions and see you in March at Dutch Comic Con!