I have a new addiction! And it's called La Casa De Papel (English title on Netflix: Money Heist). I had heard SO MUCH about this series. Everyone was so positive. But somehow I never follow that immediately. I waited and waited. And I'm always full of preconceptions (I don't like robbery movies). Yeah, it took me a while to figure out I had to watch La Casa De Papel. But when I did... Oh boy I was addicted instantly!

La Casa De Papel or Money Heist is a bout a group of robbers who, under the lead of a guy who calls himself "the Professor" decide to rob the Royal Mint of Spain and print 2.4 billion! After months of preparation the time has come: they're ready. 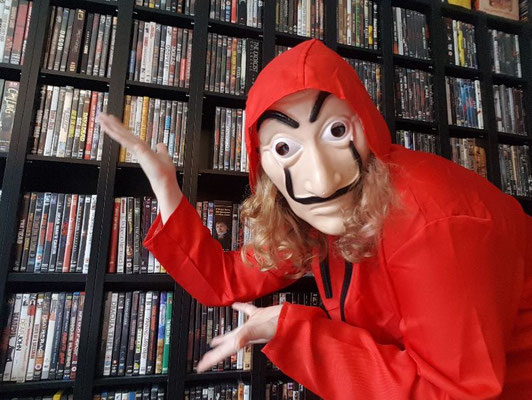 I really LOVED La Casa De Papel/ Money Heist. This is an easy review. I was addicted from the very first episode. I waited so long to watch this. But when I finally did, I loved it instantly. And as you can see in the picture above: Liv & I are going to comic con in La Casa De Papel style! That's how much we like it.

The story is awesome. every episode, I couldn't wait to find out what the Professor had in store again. I was so excited to find out if there would be a mistake, if Raquel would solve the robbery and if the Professor already had anticipated on it. It's just the type of series that stays in your mind. I couldn't wait until I had time to watch the next episode. Every free minute would go into Netflix, watching La Casa De Papel!

I have now seen season 1 and 2 and can't wait for 3. It's so smart, surprising and full of amazing characters. It's definitely one of my favorite series!

I had never heard of the actors in La Casa De Papel. But like I loved the series, I loved the actors as well.  The characters in the series are great and so are the actors. It's not often, that I have so many favorites. Therefore, I will kick off with the, for me, most annoying character: Arturo Román. Also known as Arturito. Enrique Arce does a great job in portraying Arturo, but oh boy how annoying is he. Always doing the wrong things at the wrong moment. In one of the first scenes, Berlin compares Arturo to the 'dumb' person in horror movies who make you scream to your TV, 'Don't do it!!!'And that is true. Arturo keeps annoying me haha.

Okay, let's talk about the group. They all have cities as names, so they won't know each others identity as well. So we have (besides the Professor, the brain behind the robbery) Berlin (Pedro Alonso), Tokio (Úsula Corberó), Rio (Miguel Herrán), Denver (Jaime Lorente), Nairobi (Alba Flores), Moscú (Paco Tous), Helsinki (Darko Peric) and Oslo (Joseph Whimms). I have to say I got use to the city names pretty quickly. After one episode it was already normal for me to talk about Berlin and Tokio.

My favorites in the group? I really liked Berlin & Nairobi! Who are your favorites?

Besides them, I also thought Raquel (Itziar Ituño) was awesome. I liked how smart the professor is, but he's is not one of my favorite characters.