When we were looking for things to do in Sheffield, we saw the National Videogame Museum was on walking distance of out hotel. Whoop whoop! As soon as I read there was a Sonic figure to take a picture with, I was sold on the idea. (I've been playing A LOT of Sonic Team Racing lately).

Going to the National Videogame Museum

On Saturday we first went to Gregg's for breakfast. We were done before the NVM opened, so we filled up our time by going to Cex (And buy some DVDs of course). Around 11.30 we arrived at the NVM and we were greeted very friendly. We received a wrist band and were ready to go! They also told us there was a picnic area. They don't serve food, but you can bring/ get your own and eat it there. I started instantly with a Sonic picture. In the pocket! WHOOP WHOOP. 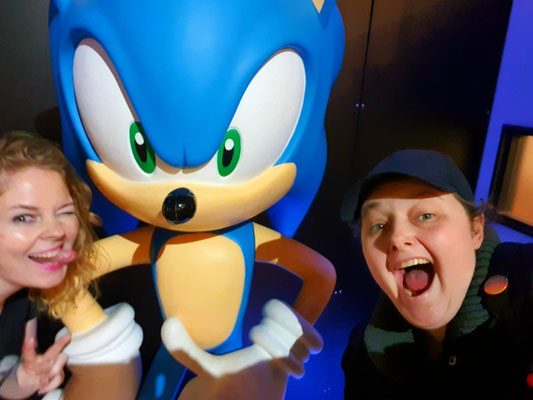 I kicked off with a duck game. I had to collect ducklings and guide them to the exit. (Super Rub a Dub on the PS3). It was way harder than it looked like. The first levels were easy, but then it got way harder! Especially since I had no idea to play it haha. (You had to tilt the controller to steer). After a few levels, I decided this was not my talent and I moved on. I discovered a Sonic team Racing arcade game. And you guys know how much I love the Sonic racing games. (Excited is an understatement). It was way harder though, to play it like that than at home! The steering wheel was not my friend. I prefer the Xbox One controller lol. Meanwhile, Liv was trying out some other games! 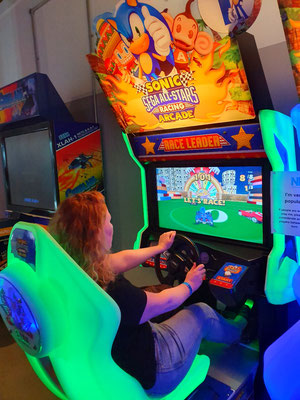 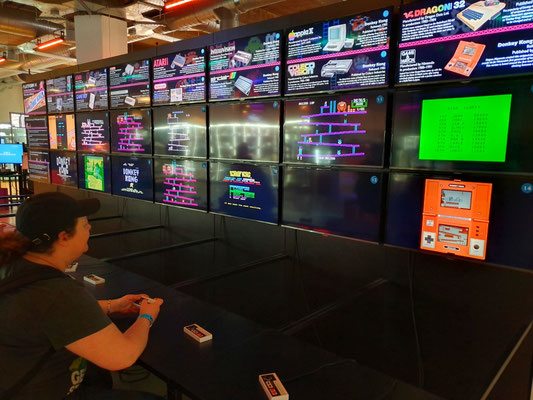 The National Videogame Museum is not "just" about playing games. A lot of games, consoles and accessories  are displayed there as well. Just take a look at a few pictures below! It shows you a couple of things that you can see at the museum. It was a lot of fun to see. These displayed items and the games you can play are all situated in 1 area. So you can cover everything at once.

It was fun to see all the items. See a Furby again. And a Gamboy printer (I didn't even know there was a Gameboy printer!). It was a mix of old and new things and I loved walking by it.

Of course we played even more games.. Let's see, what did I do? We played a bit of Turtles. It was fun, but not entirely my type of game. Right after that, I started playing some Vib Ribbon. I didn't know the game before, I really liked it. It is a game that gets me frustrated quickly though hahaha. It's definitely not the easiest game. We played some more QWOP, trie out an INKS pinball machine, played Trap Adventure 2, and played Rock Band 3. There was even a Pac-Man game for 4 players. You were 1 Pac-Man with 4 people, all operating 1 direction of Pac-Man. That's quite a lot right? The last game we played was Sega Gunblade.

I really liked playing all these games. Trying out new ones, replaying old ones. We spent a few hours in the National Videogame Museum and it was fun! I loved playing Sonic Team Racing of course, but I'm definitely happy to have discovered QWOP as well. We know use QWOP as a verb (like a synonym for being clumsy hahaha). QWOP will stay a thing forever. Being in Rock Band together was a lot of fun too, we played Bohemian Rapsody of Queen. I can just say, we had a great day and I loved playing so many different games!