Who are Dutch Fredette vs Jason?

Let's start with a little introduction, to get to know a bit more about this dynamic duo! They will introduce themselves:

Jason: "43 years old, I'm married to a lovely wife and work as a software-tester. Like Fredette, I also love to be a scare-actor. Furthermore I’m a tattoo addict. I just love the ink!"

Thanks! Let's go one step further.. What do most people not know about you yet?

We have seen you as a duo at Comic Cons, a couple of times now, but we were wondering: How did you guys meet?

Fredette: "Two years back I was working for a big Halloween event at Utrecht and when it was Friday the 13th, we had this new colleague coming as Jason Voorhees. So the idea of Fredette vs Jason was born..."

Jason:  "Yes, I was forced to be Jason because of my size. I didn't mind it though. I loved playing Jason, even though I hadn't seen any "Friday the 13th" movies at all haha. But lots of people were scared. We started talking after the haunted house closed. Kelly told me about her cosplaying as Fredette and her wish to visit a lot of cons. So I decided to make my own version of Jason. To be more precise : OUR Jason version."

That's awesome! How did you get into scare events/ comic cons in the first place?

Fredette: "My 'brother-from-another-mother' Jan Bartels from Screen-used Movieprops has a booth at Comic Con and such events.  Three years ago he asked me to go with him. I loved it and when we went for Weekend of Hell 2 months later, I tried my Fredette cosplay for the first time. It was supposed to be a  one day joke, at least that was the plan. Well we all know how that ended. I got into scare events two years back, when a new event "Halloween Nightmares" was looking for actors. I decided to give it a shot and signed in for my first audition ever. And what I didn't expected happened: I made it!"

Jason: "I always liked interacting with people. And I had the secret wish to work at 'Fright Nights' in Walibi. But they demand too many days in a short period. With a 40 hour work week I simply can't combine it. So I let that dream pass. Until a friend of mine told me he would be working in a haunted house in Utrecht. We talked about it and before I knew, I sent an email saying that I wanted to do an audition. But before the audition took place they called me and asked if I wanted to fill in for someone. After one, very long, day I was hired, and the whole carnival started."

That's a great start. Let's zoom in a little more on the characters you play and get to the core. Who would win in a battle between the Dutch Fredette and Jason?

Jason: "First of all, there will never be a fight between them. Its not a battle...."

Fredette: "Nope, we do it for the visitors of the cons. They are the winners. Especially the kids. We love them..."

Jason: "But if we would fight, it would be a fight 'till the death. And we all know Jason and Fredette cant die. So there will never be a winner...I guess."

How about a fight between Kelly and Daniel?

Fredette: "But I know his weak spot hahahahaha!"

Dutch Fredette vs Jason at events

Let's talk about all the events you guys attend! Let's start with scares.. What has been your best scare so far?

Jason: "Probably the 5 i did on Liv :). No, there is not one scare in particular. I made people pee their pants, made them quit, made them scream. The funniest ones I had, was when I played a kind of a Yeti. The timing was the best that evening. So many people were running against the wall, jumping in the air and screamed their lungs out. Even men taller than I am were scared."

Fredette: "Last year I was working for Scare-Me and we went to the city to promote the event. I was in character of the Nun. I was just walking around and didn't do anything special, but a lady walked by, she was shocked and kept looking at me whilst walking. She didn't notice the pole in the middle of the street and fell over it. It wasn't really a scare but it was so freakin' funny!

Haha that is awesome! Being a scare actor must definitely be a great thing to do !

So, we know you guys love scare events and comic cons.. To get a good overview:  Which events do you usually attend?

Jason: "It's all new to me. A year ago I had never attended one. Since the first haunted house I visited, I go to any event where I get booked. Haunted houses, carnivals, cons. It doesn't matter. As long as I have time to do so..."

When you pick an event or get booked for an event: What is important to you/ What should the event be about?

Jason: "It's not actually something that's important. We love doing cons. Either comic con or horror related. As long as there are cosplayers and people  want us there."

You have attended a few events now.. Can we already talk about your best memory of an event?

Fredette: "This is a hard one! But the best memory was in March at Dutch Comic Con It was the first time with our booth and that gave us an amazing and proud feeling!"

Jason: "Actually the same. Our first time with our booth. But also our first time ever on a con in a booth. We were invited, as mystery guests, by our friends 'The Predators of the Earth'. That was our first time ever in a stand, together. It was also the first time that people were making pictures of us with a background etc."

So.. Dutch Comic Con! We did see you there that first time and it was amazing. Your booth looked very professional and you were great with all the visitors. We just knew it would be a big success. And for our international readers who might be excited to see you too.. Do you also attend international events?

Fredette: "Yes we do. We’ve been to Dortmund and Oberhausen. And we would love to go to other places too."

Jason: "Yes, as long as its not a long travel. As only I can drive and we have to fit everything in one car."

Talking about everything that needs to fit in the car.. What kind of preparation do you need to do before you go to an event?

Jason: "Not much. Everything is packed already. I only have to pack the car. That is about 10 minutes work."

Fredette: "My con preparation is mostly SFX related. I need to make silicone prosthetics for Fredette and that takes the most time to prepare."

And now... the most important question of this whole interview. We can imagine people getting super excited to see you.. How can you be booked you for an event?

Jason: "They can contact us by sending an email, sending a DM on Facebook or a DM on Instagram. Or talk to us when they see us at an event. We love talking to people..."

And where will people be able to see you this year?

Fredette: "At this moment we only have Weekend of Hell in November planned"'

Jason: "And an option for Dutch Comic Con."

Fredette: "Oh and we are booked for the first weekend of Scare-Me. Come visit us there!"

What are your ambitions for Dutch Fredette vs Jason?

Jason: "And entertain a lot of people."

We saw that you are also supporting charity. Can you tell us more about that?

Fredette: "Yes we can. It's called "Bikers against Child Abuse". Everything with kids or animals has our support, but we had to pick one, we cant collect for them all. And child abuse is a very big problem. Keep your hands off"

Jason: "We know one of the treasurers of BACA, and we know if we give the money tot him it will be spend 100% on the kids they protect."

Fredette: "I met a lot of star guests and they were all so nice to chat with! At Weekend of Hell (last April) we even got Tobin Bell (Jigsaw) and Costas Mandylor (det. Hoffman) from the "SAW" franchise in our booth!!"

Jason: "I haven't been to many events. I was at Wrestlecon and met my all time hero Hacksaw Jim Duggan. And as Fredette already told, we met Costas and Tobin in our booth. That's something special. Oh and when I think of it, I met Kane Hodder too."

Have you ever seen the actors of the characters you play at events?

Fredette: "Yes! I met Robert Englund twice. Billy doesn't have an actor, but is a creation of Jigsaw, so in my opinion yes."

Jason: "Kane Hodder was one of the Jason actors, so yes. And I hope to see Ari Lehman at Weekend of Hell in November."

Jason: "There are some actors I would love to meet. But not pay that much money for one picture. Johnny Depp is one of them. Steve Buscemi and Kevin Smith. I would pay for Kevin Smith though."

Fredette: "I would love to see Robert Englund again (I met him twice before) and invite him to visit our booth and have a fight with Jason!"

For this interview we have also prepared some tough choices for both of you! Ready??? GO!!!

Jason: That's until Jason stands in front of her and then she shakes. Jason of course!"

Jason: "Jigsaw, but only because Kelly cosplays it. Otherwise it would be neither."

Being Billy or the Dutch Fredette?

Fredette: "Tough choice. As much as I love Fredette, I have to chose Billy. I put a lot of time, work and love in making his mask and making the whole cosplay as real as possible. I change in a whole other character when playing Billy. When I am Fredette you can still see Kelly."

Jason: "True. Billy is awesome. She gets so many reactions of the visitors when she rides that little red bike. But my choice is of course Fredette. Without Fredette there wouldn't be a Jason."

Fredette: "Tobin Englund? (they're both awesome!)"

Jason: "Tobin, but just because he visited our booth. I don't know Robert....Yet."

Scare someone or get scared?

Jason: "WHAT? You don't know the difference? Marvel, and they should adopt Batman." 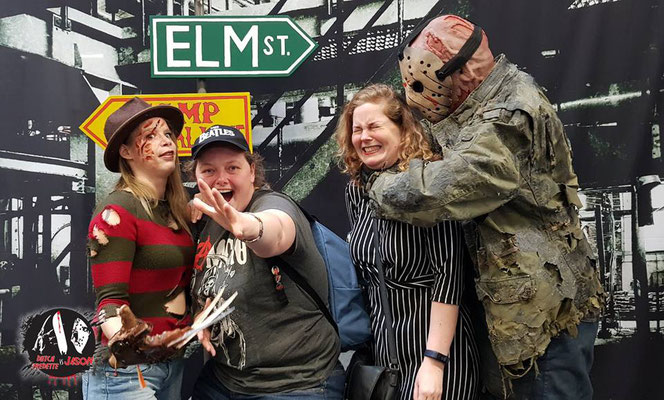 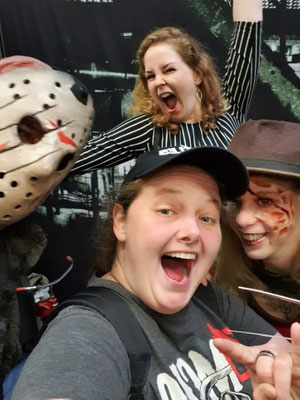 Favorites with Dutch Fredette and Jason!

Last but not least... We would like to discuss some favorites with you! What's your favorite.... 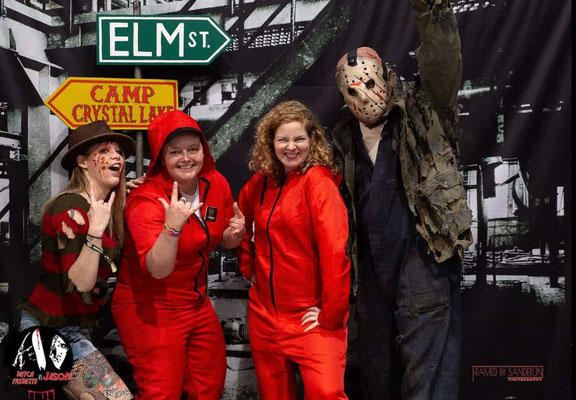 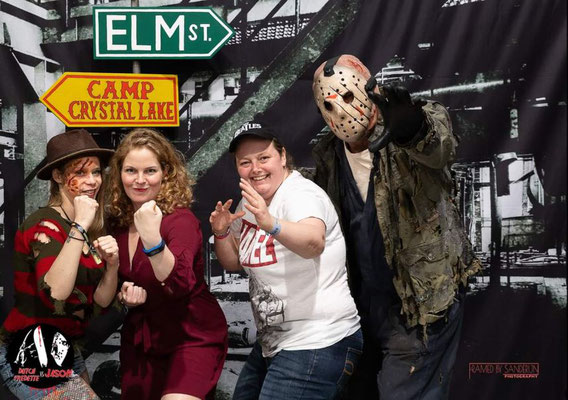 Thanks a lot! We are so happy to do an interview with you and hope to see you guys at many more events. We loved seeing you guys at Dutch Comic Con and Weekend of Hell. You are so energetic and great with all the visitors! Just a reminder for all events: You can contact this awesome duo by sending an email, sending a DM on Facebook or a DM on Instagram!