Movie Review: The Shape of Water

Today we are going to talk about the winner of this year's Academy Award for best movie: "The Shape of Water".  The movie is written and directed by Mexican filmmaker Guillermo del Toro, known for other great movies, like: "Pan's Labyrinth", "Hellboy", "Hellboy II: The Golden Army”, “The Devil's Backbone", "Crimson Peak" and more. At the 2018 Academy Awards, "The Shape of Water" was nominated for 13 awards and won the Awards for: "Best Picture", "Best Director", "Best Original Score" and "Best Production Design".

"The Shape of Water" is set in Baltimore in the early sixties and revolves around the mute Elisa Esposito (Sally Hawkins). She was an orphaned child and found in a river with wounds in her neck. Elisa is a mute and she communicates through sign language. She lives above a cinema and works at a secret government laboratory as a cleaning lady. Elisa leads a boring and somewhat lonesome life, but she does have two close friends: her next-door neighbor Giles (Richard Jenkins) and her co-worker Zelda (Octavia Spencer). Elisa has a strong connection with Giles, who is a struggling commercial illustrator in his mid-50's. Giles is gay but has never disclosed his sexual preference and Elisa seems to be the only one who knows about this. In the intolerant climate of the America of the 60's, racism against anyone "different" thrived". Homosexuality was a taboo and black people were seen as inferior. This brings us to Elisa's other friend, her colleague Zelda Fuller. Zelda is very talkative and she also serves as Elisa's interpreter at work. She is weighed down by the power of the "white" man and her deadbeat of a husband, but she seems to survive by being the brave and hard-working woman that she is.

Elisa and Zelda work as cleaning women in a secret government laboratory in the early sixties (at the height of the Cold War). One day a mysterious creature (Doug Jones) arrives at the facility. It turns out that the creature was captured from a river in South America by Colonel Richard Strickland (Michael Shannon), a paragon of the ignorant and dominant military man (who thinks women and especially black women are inferior). He is in charge of the project to study the creature and the possibility to use it as an advantage in their war with the Russians. At one day Zelda and Elisa are called into the room where the creature is kept to clean up the mess. Apparently, the creature (called "the asset") attacked Strickland and this causes him to lose two fingers. Elisa and Zelda start cleaning up the blood. Elisa however is curious about the creature in the water and starts visiting him in secret. It turns out to be a humanoid amphibian and they start forming a friendship. It turns out that the creature is intelligent and capable of learning and communicating. One of the scientists Robert Hoffstetler (Michael Stuhlbarg), who is actually a Soviet spy called Dimitri Mosenkov, notices this when he sees Elisa communicating with the "asset". The bond between Elisa and the creature keeps on getting stonger, she even smuggles a recordplayer into the laboratory.

One day a military General called Hoyt enters the lab, to see if the military can use "the asset" to gain an advantage in the Space Race. He orders Strickland to kill and vivisect the creature. This brings Mosenkov in a difficult situation. He has seen the creature evolve during his time with Elisa and pleads to keep the creature alive for further investigation. His Russian bosses however also want him to kill the creature, to take away the American's advantage. When Elisa finds out what Strickland is up to, she comes up with a plan to free the creature and save him. She persuades Giles to help her and when Mosenkov finds out about it and he decides to help her as well as Zelda. Elisa finds out she has strong feelings for the creature and they go beyond just friendship. Will Elisa succeed in freeing and saving the love of her life?

When I first heard about the movie, I instantly knew I wanted to see it. I think Guillermo del Toro is a great filmmaker and his movies are visual masterpieces. In my opinion "El Laberinto del Fauno" ("Pan's Labyrinth", 2006) was his best up until now. For me "The Shape of Water" is definitely up there on top of the list.

First, I would like to talk about the actors and actresses in "The Shape of Water". Let's start with Sally Hawkins, she plays the role of Elisa Esposito. Elisa is mute, so Hawkins has to do all the acting with her face and the rest of her body (gesturing and even some dancing) and she does a phenomenal job. Hawkins has been acting for 20 years and her first acting job was an (uncredited) role in "Star Wars-Episode I: The Phantom Menace". In the 20 years that followed Hawkins appeared in a lot of great movies, and tv shows, like: "Blue Jasmine" (as Ginger, she got her first Oscar nomination for this one), "Godzilla" (as Vivienne Graham), "Paddington" (as Mary Brown), and many more. For "The Shape of Water" Hawkins received a second Oscar nomination (Frances McDormand won for "Three Billboards outside Ebbing, Missouri”) and I think it won't be her last one!

Del Toro has a go-to-actor to play his creatures. Meet Doug Jones...he is the man behind the creature in "The Shape of Water". Before he went into acting Jones was a contortionist, which makes him the perfect guy to play supernatural creatures. He is very agile and can bring his body in all kinds of weird positions. Like I already mentioned Jones and Del Toro worked together on many movies, like: Hellboy (where Jones plays Abe Sapien), "Pan's Labyrinth" (as the Pale Man/El Fauno), "Mimic" (as Long John) and more. A few years ago Doug Jones was a guest at Dutch Comic Con and we were able to catch his Q&A. That was very cool, Jones is very passionate and talked a lot about his roles. He even did his Pale Man-impression (see picture). In "The Shape of Water" Jones does an amazing job playing the creature.

Well that's that for the two leading roles, but I can't go on without mentioning the other actors in supporting roles. They all seem to be just perfect for their roles. I'm talking about Michael Shannon (as the immensely arrogant Strickland), Richard Jenkins (as neighbor and best friend Giles) and Octavia Spencer (as Zelda Fuller). Apparently Del Toro wrote long backstories for all the characters in the story and let the actors decide whether they wanted to read and use it or not.

You could say that "The Shape of Water" is a modern fairytale against the background of the America during the Cold War in the early 60's. This was a very intolerant time in America. Women were seen as inferior, as were black people. Being gay was a taboo. The story is all about not fitting in. because of being "different" in any way. First of all, we have Elisa. She was found in a river at a young age and has been mute for her whole life. Because of this she is being treated as a retard. Then there is the creature, who is different because he is not human and people instantly look at him as if he is a monster. The American military only wants to use him in their war against Russia. Giles is a closeted gay man in his fifties and lives a secluded life. At one point he tries to show his real personality, when he goes into a local coffeeshop and tries to express his feelings for a guy behind the counter. In this scene it becomes painfully clear, how the social conditions were at that point in American history. Last, but not least there is Zelda, a black woman working as a janitor in a white male society. Especially in her scenes with Strickland, we see how racism was (and is) embedded in a big part of the population 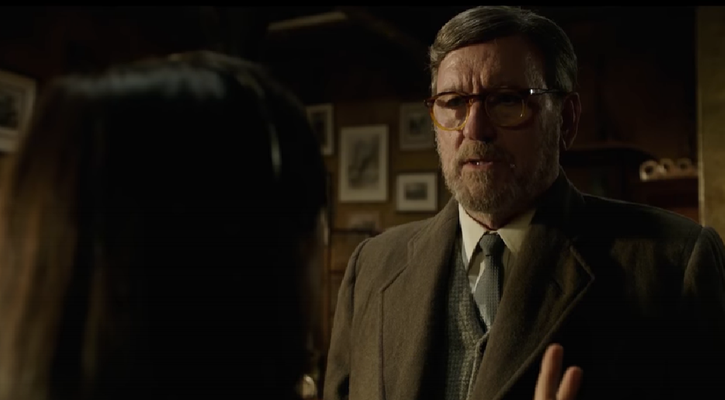 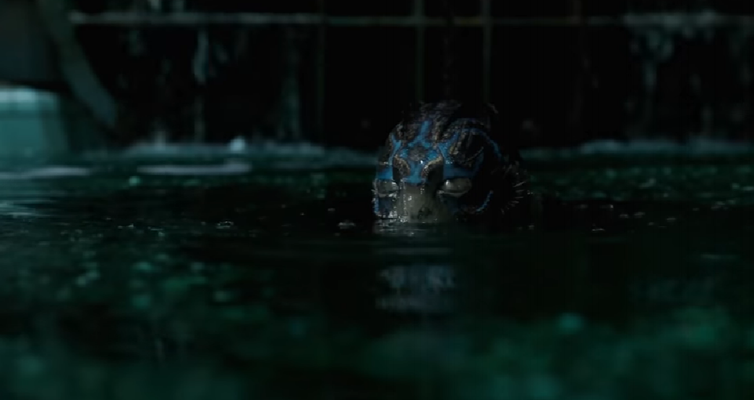 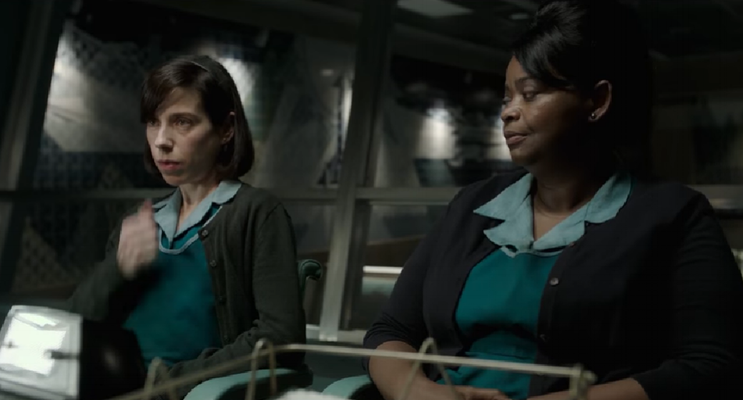 Strickland seems to be the impersonation of everything that is wrong with society and Shannon does a great job in portraying him. I mean you really, really hate that guy. All these hidden layers in the story make this visually great movie one to remember. I mean a movie can be beautiful to watch, but there has to be a great story to back it up! Must watch!