This year, we went to Comic Con Ahoy for the first time. Liv and I thought it was time for a Comic Con again (the last one we attended was the Dutch Comic Con Winter Edition in December). And Comic Con Ahoy was our first opportunity this year! The guest list was nice, quite some actors I wanted to see. So we were definitely excited when we got in the train that Saturday!

During our trip, we found out that quite some actors had to cancel due to the weather. Steven Ogg, Christopher Lambert, Chris Rankin and Charles Dance. Some of these cancellations were being announced when we were already on our way. We were very much disappointed. I would have loved to meet Charles Dance and Steven Ogg. But, you can't do anything about the weather! I do think communication around this could have been better! Definitely! Don't get me wrong, I get that it's not their fault that the weather was so bad that the guests had to cancel. But I do think they knew that these people weren't coming earlier on. Like Carola said we were very dissapointed (as you can see in our compilation video...), but we always have fun and there were some other nice guests, like Daniel Naprous, Manu Bennett, Richard & Jessica Harmon and Ronn Moss & Devin Devasquez.

Liv and I had some delay during our travel . Yup, I set my alarmclock at 5 a.m. and I was on my bike at 5.45. It had snowed, so I had to pull off some gymnastics to get to the trainstation. The Dutch are biking people, but somehow the trucks that sprinkle the roads with salt always forget to do so on the bike paths. And then there is the public transport. They spent millions of euros to get the tracks winter ready, but one snowflake and everything is completely messed up lol. At 7 a.m. Carola and I already had our morning gymnastics, because we had to run like the wind to catch a train. We arrived at 10.30 at Ahoy Rotterdam. There was no queue to enter the convention. When we entered I immediately felt like there was something missing. And I don't mean the cancelled guests ;). Of course they were "missing" as well. But I also missed some attention for the design of the Comic Con, the atmosphere. I saw a table with Cards Against Humanity on it. But it was just a table, with the game on it. Very quickly people were just sitting there having lunch. I really missed the look & feel of Comic Con.  I get what you mean, but it isn't something I find disturbing, I mean Weekend Of Hell/House of Horrors/Weekend of Horrors also doesn't have that  and I like it anyway.

We started walking around and looking at the merchandise, since we would only have some panels in the afternoon. I was a little disappointed by the amount and diversity of merchandise stands. The comic con as whole just felt very small. We were done looking at merch quite quickly and I didn't find anything I wanted to buy. That is true, there were some familiar faces , like Cool2u and Dirtees, so I knew I would buy something. This time I bought an E.T. shirt at Cool2U, but if you ever get to a convention and you see the Dirtees stand go there and have a talk wit Melvin. He is just so nice. If you do make sure to say hello to him from us.

Usually at a comic con, Liv & I forget to eat & drink just because we're so busy. Yes we do not take good care of ourselves at convention days. I remeber our day at Walker Stalker Con in London. We just didn't have the time to buy a drink and ended up with a big headache, lol. Here.. well we had a few coffees and also had lunch there. It was good that we had some time, because the queues were long and there wasn't a lot to choose from.  But well, we had time enough so we just waited and got several coffees.

In the morning, Kelly and Anne joined us and we already started talking with Devin Devasquez and her husband Ronn Moss. Devin has played in movies like Society and Citizen Toxie: The Toxic Avenger IV. Ronn Moss is of course known for the Bold and the Beautiful. They were very nice. It was easy to talk to them (they were very talkative). It's a pity that it wasn't allowed to take pictures of the actors while they were signing. Liv got a picture with Devin & Ronn and got an autograph from Manu Bennett.  O yes I did. I will write an article about these meetings later on, but take a look at the picture and the autograph below.  About the not taking pictures, i just don't get that. Especially when you buy an autograph. It is just great to have a short movie clip or a picture as a souvenir to remember the moment by.  And most of the time it aren't the actors that set that rule (Ronn Moss and Devin Devasquez thought it was very strange). I asked about it and one of the voluntueers told me that it is not fair for the people that pay for a photo op. Well I don't think that is something you can compare. A photo op is a professional photo with a background and a professional photograph, this is a short videoclip with your phone AND you paid for the autograph...well I just don't get that. 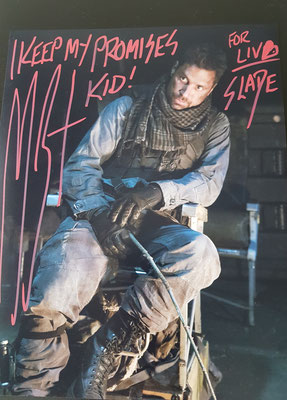 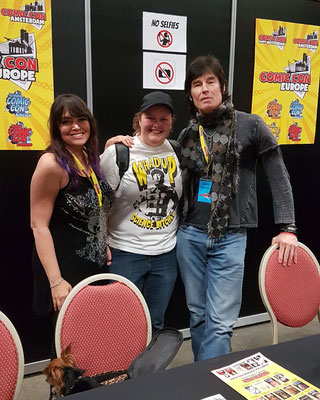 I always love attending panels and I was looking forward to some here as well.  I was very happy to see that the lighting was great! Excellent for making pictures. I'm always happy about that. The panels were really fun to watch. There were a lot of questions from the audience. Ronn told this was his first comic con! He was very enthusiastic. Richard and Jessica Harmon were so much fun to look at. There was (unfortunately) a lot of background noise (music). Richard responded to that by doing a dance haha. It was a very funnel panel. It's a pity though, that the panel location is located in the same room as the merch stands. There was too much background noise. Manu Bennett was very talkative and his panel took twice as long as expected. There were also some seating issues. The front rows were for VIP passes, but at first no one really checked. So basically everyone was sitting everywhere. When some people with a VIP pass complained, the moving began. That should have been taking care of from the start. The lighting and sound was great, but like Carola said the noise from the rest of the hall was very disturbing sometimes. Oh yes the VIP passes, I think that a lot of conventions can take a look at how FACTS (Ghent) does this. The Panel Room is a closed room, so you do not get any noise and there are VIP places, but when they don't show up you can just sit in these rows. Now the first rows were cleared for the VIP passes (which I get, don't get me wrong those people paid a lot for that passes), but the rows stayed empty. Check out some pictures and videos here: 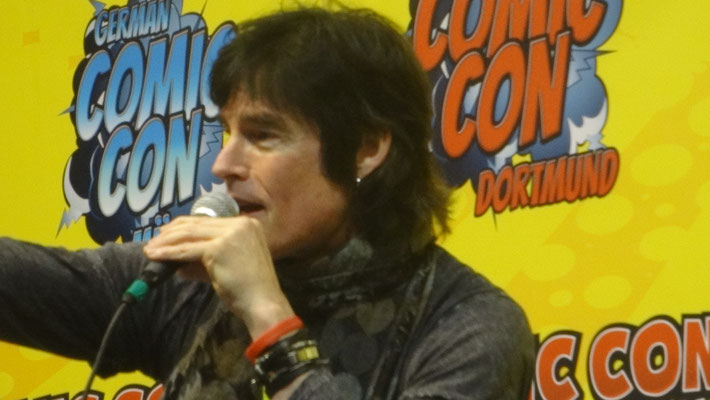 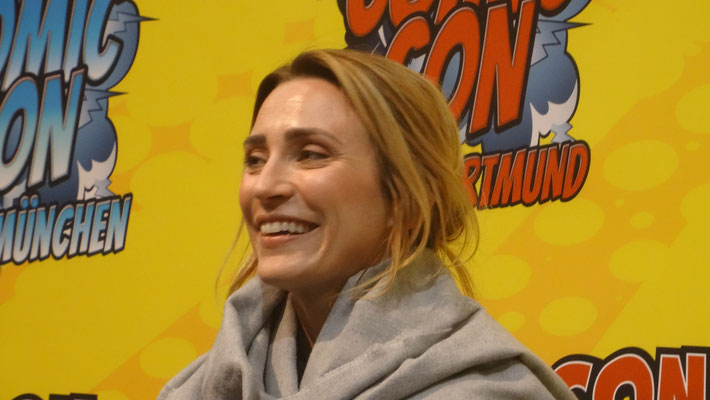 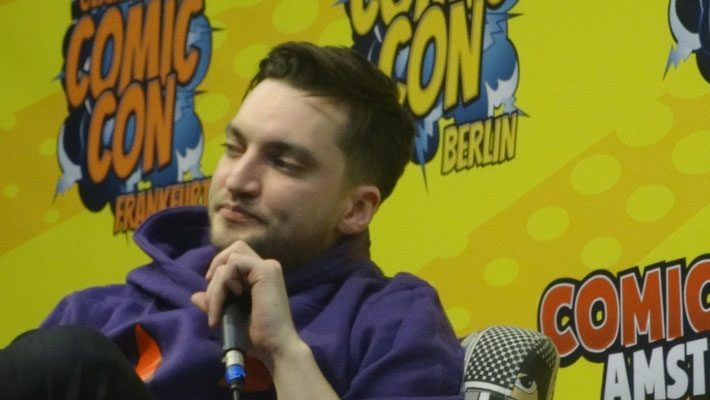 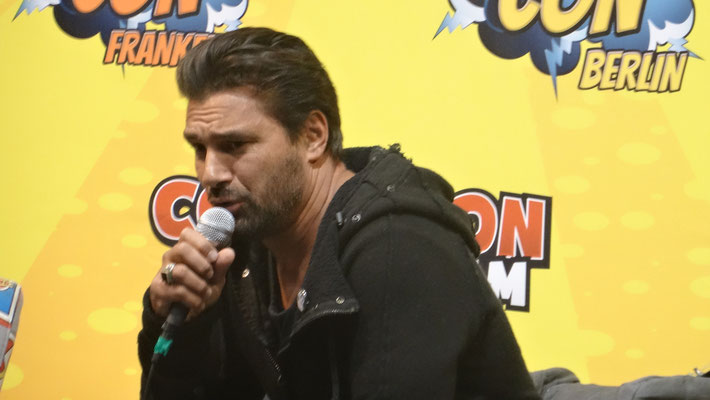 Liv and I had a great day in Rotterdam. We had a lot of fun. We always have fun at a con. I liked the panels & the actors. The ones we've seen and the actors we spoke with were all very kind and enthusiastic. Will I return to this Comic Con next year? Big chancee I won't. I thought it was too small, not enough diversity in merch stands. All in all I just didn't feel like there was enough to do and see for me. A picture on a Big Bang Theory or Stranger Things couch cost 5,- euros. Which I thought was expensive. So we skipped that. Like I said, the table for Cards Against Humanity was used as a lunch table. And I missed a real Comic Con atmosphere.

I agree, we did have a lot of fun and I thought the panel stage was great (good lighting, good sound). But like Carola said it was kinda small and there was not much to do, except for the actors and some merchandise stands. Will I return? For me it will certainly depend on the guestlist (and the weather) . But hey who knows, things can change over time...