When a Halloween haunted house attraction opened years ago, 15 people died on the opening night due to an unexplained malfunction. The  location of the haunted house was an abandoned hotel. A hotel with a history. Now, 5 years later, a documentary crew revisits the haunted house. Their goal? To find out what happened on that tragic opening night. They find one surviving employee who agrees to help them with the story. She has some footage of the tragic night that, she has never shown to anyone before. The documentary crew wants to find out what happened, using the found footage and going back to place where everything happened. Hell House LLC has a documentary/ found footage feel: You follow the documentary makers, but also get insights in what happened years ago, by seeing the  footage. 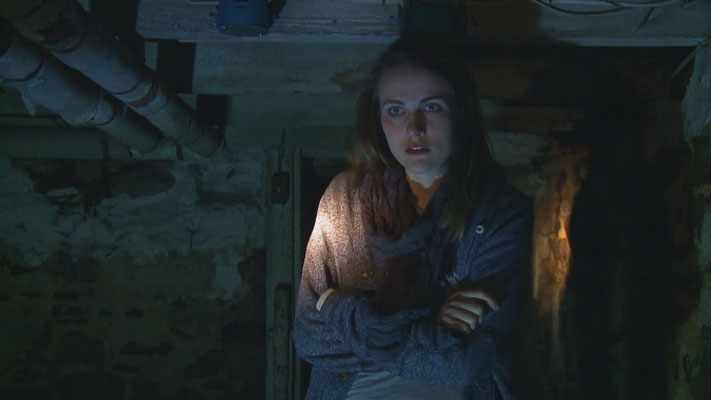 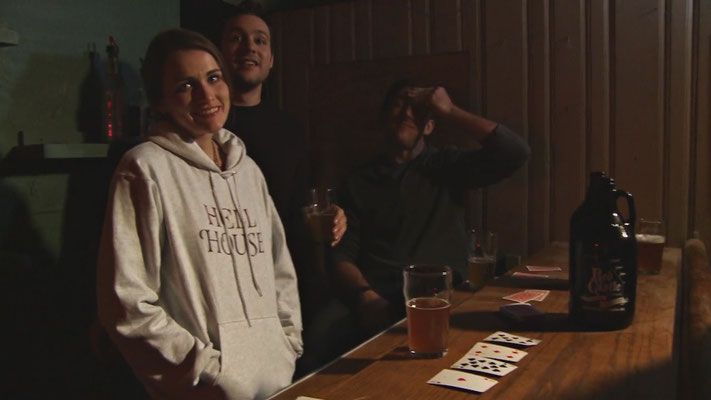 Hell House LLC is directed by Stephen Cogentti. He shot the film in May of 2014 while working full-time at another job. He edited a little each morning or a little at night. That lead to a year-long editing process until he had the locked version of the film. Hell House is a horror/ thriller/ mystery movie. The intent for Hell House LLC was to produce a slow burn of subtle, yet building,

scares. Cogentti's favorite type of scares in horror are the little things caught in the background that the protagonists are not immediately aware of. He worked to embody these sensibilities in Hell House LLC. Main roles in the movie are for Gore Abrams (Paul O'Keefe), Alice  Bahlke (Diane Graves), Danny Bellini (Alex Taylor) and Jared Hacker (Tony Presott).

When I started to watch Hell House LLC it mostly gave me a documentary feeling. It started off with people talking about it, giving information. Just like in most regular documentaries. Later on, it turned more into a found footage movie. It's a nice movie. Though I would have put more focus on the found footage and the crew visiting the scene. In the beginning, it was hard to keep focused because of the documentary style.   I was expecting more horror/ tense at the beginning. So a bit more tension at the beginning of the movie would have definitely got my attention sooner. Now I was waiting  for the scary moments to come. Later on, the movie does succeed to give more tension and take you into the story of the haunted house.

That's what attracted me in the plot of Hell House LLC: I love Halloween, scary events and haunted houses. I liked the idea of a documentary crew going back to the place where the tragedy happens. And I also enjoy a found footage movie from time to time. As far as I'm concerned, I would have loved to see more of the crew in the haunted house (in the present), because that's where the real tension is.

The camerawork and lighting in Hell House LLC is very good. It's professional and well done. The movie has some nice scenes and build up of tension, combined with decent acting. The movie didn't really surprise me though. That was a pity for me. I was often able to predict what would happen or what was going on. But I can imagine that the movie has some nice twists and turns for found footage lovers with outstanding camerawork.