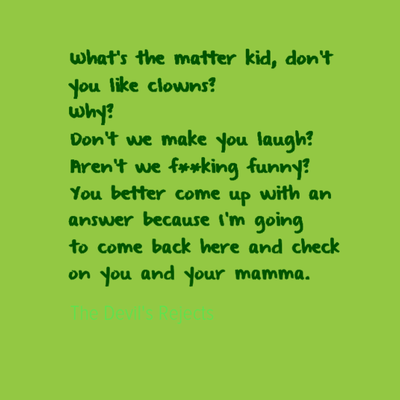 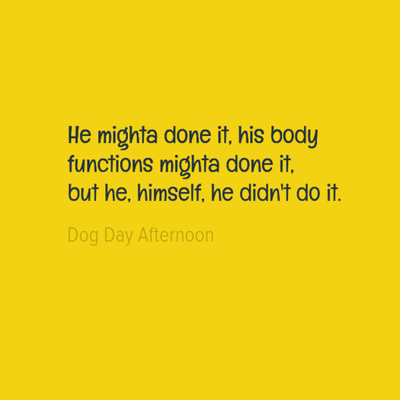 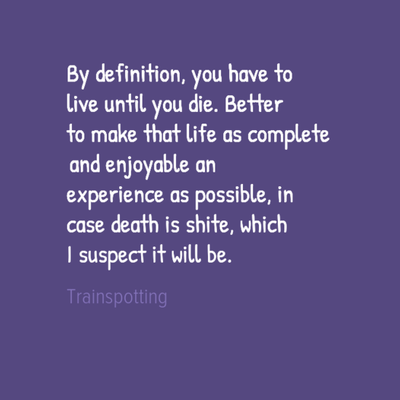 1. "What's the matter kid, don't you like clowns? Why? Don't we make you laugh? Aren't we fucking funny? You better come up with an answer because I'm going to come back here and check on you and your mamma." (The Devil's Rejects)

2. "Most people are so ungrateful to be alive. But not you. Not anymore.." (Saw)

3. "The next word that comes out of your mouth better be some brilliant fucking Mark Twain shit cause it's definitely getting chiseled on your tombstone." (The Devil's Rejects)

4. "Now the time has come. I put two bullets in my gun. One for me , and one for you. Oh darling it will be so beautiful." (Misery)

5. "The only thing standing between you and your goal is the bullshit story you keep telling yourself as to why you can't achieve it. (The Wolf of Wall Street)

8. "Please, don't worry so much, because in the end none of us have very long on this earth - life is fleeting. And if you're ever distressed, cast your eyes to the summer sky when the stars are strung across the velvety night, and when a shooting star streaks through the blackness turning night into day, make a wish and think of me. Make your life spectacular." (Jack)

9. "What some folks call impossible, is just stuff they haven't seen before." (What Dreams May Come)

12. "The world ain't all sunshine and rainbows. It's a very mean and nasty place and I don't care how tough you are it will beat you to your knees and keep you there permanently if you let it. You, me, or nobody is gonna hit as hard as life. But it ain't about how hard you hit. It's about how hard you can get hit and keep moving forward. How much you can take and keep moving forward. That's how winning is done!" (Rocky)

13.  "Normal is a setting on a dryer! Not something for people like us!" (Suicide Squad)

15. "After all, the wool from the black sheep is just as warm." (The Sound of Music)

16. "We've all been raised on television to believe that one day we'd all be millionaires, and movie gods, and rock stars. But we won't. And we're slowly learning that fact. And we're very, very pissed off." (Fight Club)

17. "Nobody feels like an adult, it's the world's dirty secret." (Liberal Arts)

20. "When there is no more room in hell, the dead will walk the earth." (Dawn of the Dead)

1. Keyser Soze: "The greatest trick the devil ever pulled was convincing the world he did not exist. And like that… he is gone." (The Usual Suspects)

2. William Wallace: "Aye, fight and you may die. Run, and you'll live... at least a while. And dying in your beds, many years from now, would you be willin' to trade all the days, from this day to that, for one chance, just one chance, to come back here and tell our enemies that they may take our lives, but they'll never take... OUR FREEDOM!" (Braveheart)

3. Maximus: "My name is Maximus Decimus Meridius, commander of the Armies of the North, General of the Felix Legions and loyal servant to the true emperor, Marcus Aurelius. Father to a murdered son, husband to a murdered wife. And I will have my vengeance, in this life or the next." (Gladiator)

4. Colonel Jessep: "Son, we live in a world that has walls, and those walls have to be guarded by men with guns. Who's gonna do it? You? You, Lt. Weinburg? I have a greater responsibility than you could possibly fathom. You weep for Santiago, and you curse the Marines. You have that luxury. You have the luxury of not knowing what I know. That Santiago's death, while tragic, probably saved lives. And my existence, while grotesque and incomprehensible to you, saves lives. You don't want the truth because deep down in places you don't talk about at parties, you want me on that wall, you need me on that wall. We use words like honor, code, loyalty. We use these words as the backbone of a life spent defending something. You use them as a punchline. I have neither the time nor the inclination to explain myself to a man who rises and sleeps under the blanket of the very freedom that I provide, and then questions the manner in which I provide it. I would rather you just said thank you, and went on your way, Otherwise, I suggest you pick up a weapon, and stand a post. Either way, I don't give a damn what you think you are entitled to." (A Few Good Men)

5. Michael Corleone:  "So the next day, my father went to see him; only this time with Luca Brasi. An' within an hour, he signed a release, for a certified check for $1000. My father made him an offer he couldn't refuse. Luca Brasi held a gun to his head and my father assured him that either his brains, or his signature, would be on the contract. That's a true story. That's my family, Kay, it's not me." (The Godfather)

7. Irvine Welsh: “By definition, you have to live until you die. Better to make that life as complete and enjoyable an experience as possible, in case death is shite, which I suspect it will be." (Trainspotting)

8.  Irvine Welsh: “Choose Life. Choose a job. Choose a career. Choose a family. Choose a fucking big television, choose washing machines, cars, compact disc players and electrical tin openers. Choose good health, low cholesterol, and dental insurance. Choose fixed interest mortgage repayments. Choose a starter home. Choose your friends. Choose leisurewear and matching luggage. Choose a three-piece suit on hire purchase in a range of fucking fabrics. Choose DIY and wondering who the fuck you are on Sunday morning. Choose sitting on that couch watching mind-numbing, spirit-crushing game shows, stuffing fucking junk food into your mouth. Choose rotting away at the end of it all, pissing your last in a miserable home, nothing more than an embarrassment to the selfish, fucked up brats you spawned to replace yourselves. Choose your future. Choose life… But why would I want to do a thing like that? I chose not to choose life. I chose somethin’ else. And the reasons? There are no reasons. Who needs reasons when you’ve got heroin?” (Trainspotting)

9. The Joker: "Do you want to know why I use a knife? Guns are too quick. You can't savor all the... little emotions. In... you see, in their last moments, people show you who they really are. So in a way, I know your friends better than you ever did. Would you like to know which of them were cowards?" (The Dark Knight)

11. Buzz Lightyear: "To infinity and beyond!" (Toy Story)

12. Clemenza: "Leave the gun. Take the cannoli" (The Godfather)

14. Michael Corleone: "There are many things my father taught me here in this room. He taught me: keep your friends close, but your enemies closer." (The Godfather - Part II)

16. Bubba: "My given name is Benjamin Buford Blue, but people call me Bubba. Just like one of them ol' redneck boys. Can you believe that?"

17. Harry Callahan: "Uh uh. I know what you're thinking. "Did he fire six shots or only five?" Well to tell you the truth in all this excitement I kinda lost track myself. But being this is a .44 Magnum, the most powerful handgun in the world and would blow your head clean off, you've gotta ask yourself one question: "Do I feel lucky?" Well, do ya, punk?" (Dirty Harry)

19.  Colonel Walter E. Kurtz: "I've seen horrors, horrors that you've seen. But you have no right to call me a murderer. You have a right to kill me. You have a right to do that, but you have no right to judge me. It's impossible for words to describe what is necessary to those who do not know what horror means. Horror! Horror has a face, and you must make a friend of horror. Horror and moral terror are your friends. If they are not, then they are enemies to be feared. They are truly enemies." (Apocalypse Now)

21. Sarah: If the people we love are stolen from us, the way to have them live on is to never stop loving them. Buildings burn, people die, but real love is forever. (The Crow)