June 8th: Only 17 more days 'till ArcCon! Today is Wednesday so it's time for another "In the Spotlight" and this week we point our spotlight on Katie Cassidy. Katie played the role of Laurel Lance/Black Canary in the first 4 seasons of "Arrow". Because it's an ArcCon Countdown Spotlight we will obviously focus on her role in " "Arrow", but we will also talk about other stuff she has done. 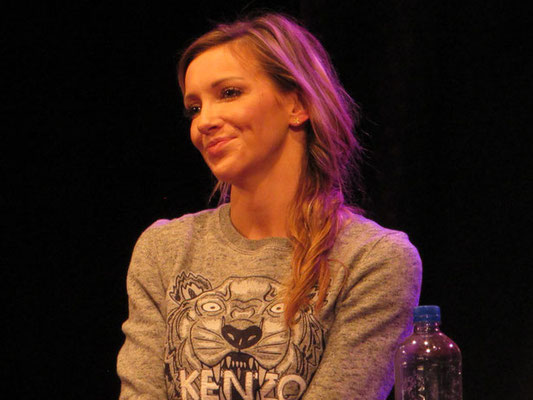 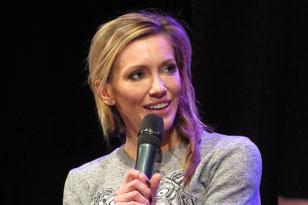 Short biography: Who is Katie Cassidy

Katie was born November 25th, 1986 in Los Angeles (California). Her father is David Cassidy, a 70s popstar/actor. He is mostly known for his part in the musical sitcom "The Partridge Family". Katie's mom is Sherry Williams, a fashion model in the 1970s. Among other famous relatives are: her grandfather Jack Cassidy (actor, mostly known for his role in the comedy series "He&She"),grandmother Evelyn Ward (Broadway/tv actress) and half-uncles Shaun Cassidy (writer/producer/actor) and Patrick Cassidy (musical/tv actor). It's safe to say that entertaining is in Katie's blood. In her younger years Katie took gymnastics, acting- and dancing lessons. She also studied piano, guitar and singing. Eventually she became a cheerleader for the California Flyers. In 2002 she recorded a song called "I think I love  you", a cover of the hit of her father's "Partridge Family". She was also modelling and taking acting classes in the community theatre. Her mother, however, insisted that Katie graduated from high school before she could start pursuing an acting career. In 2005/2006 (shortly before graduating) she gets her first real movie role, when she is cast as DeeDee in the horrorfilm: "The Lost"(2006). Before this she had played some roles in tv series like: "7th Heaven" and "Sex, Love&Secrets". Later in 2006 she gets a small role in the Adam Sandler movie: "Click" (she plays the role of the 27-year-old Samantha). In 2007 Katie gets cast for the role of demon Ruby in the tv show: "Supernatural". She plays this role for 6 episodes in season 3 of the popular show and returns in 2008 in the fourth season. During this season however she gets replaced by actress Genevieve Cortese. She also gets the role of Amanda in  "Taken". In 2009 Cassidy gets cast for the role of Trish Wellington in the CBS horror series: "Harper's Island".  After a succesfull pilot, the show struggled to keep high ratings. In July 2009 the show ended. Also in 2009 Katie gets cast for a role in the reboot of the 90's tv show: "Melrose Place". Despite low ratings (causing cancellation in 2010), Katie was praised by critics for her role of Ella in this reboot. In 2010 Katie had two major projects (among others): she starred as Kris Fowles in the remake of "A Nightmare on Elm Street" and as Juliet Sharp in the fourth season of "Gossip Girl".

In 2012 Katie lands the role of Laurel Lance in the CW series: "Arrow".  She plays Laurel/Black Canary for four seasons and she also appears in the spin-off series: "The Flash" and "Legends of Tomorrow".  Late 2016 or early 2017 Katie will star in the horror movie: "The Wolves at the Door". At this moment the movie is in post-production.

!! Warning: this piece of the article can contain spoilers!!

"Arrow" revolves around Oliver Queen a spoiled billionaire's son and playboy. He gets shipwrecked on an island when his father's yacht gets caught by a storm. His father doesn't survive. After five years he returns home, to find his city is overrun by criminals. To clean his city he decides to become Arrow, a hooded vigilante armed with a bow.

Katie plays the role of Laurel Lance, daughter of detective Quentin Lance. Laurel is Oliver's ex-girlfriend. Oliver cheated on Laurel with her sister Sara, who was with Oliver on the yacht and is thought to be dead. Laurel is a legal aid attorney in Star City. During the first season Laurel is struggling with her feelings of anger towards Oliver for cheating on her. She also blames Oliver for Sara's death. In the meantime she is in a relationship with Tommy Merlyn (Oliver's best friend). When she gets attacked at Iron Heights Prison, she was saved by the vigilante called The Hood (first name of the Arrow). She is grateful that the Hood saved her, but she is horrified by the amount of violence he uses. Later in the season Laurel and Oliver get back together for one night. During an attack at the Glades, Tommy dies while saving Laurel. 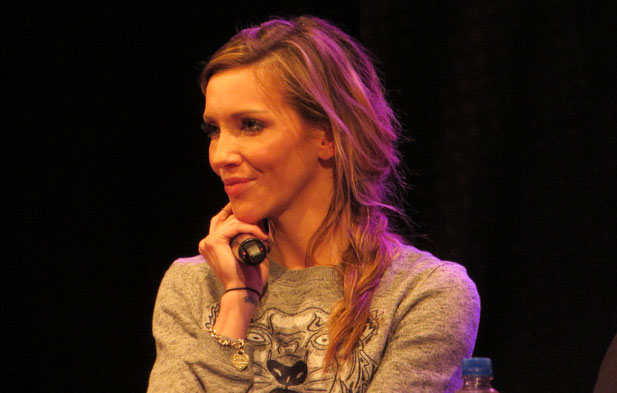 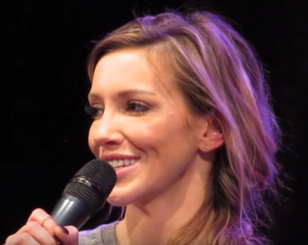 At the beginning of season 2 Laurel seems to be struggling with her feelings for Oliver and her feelings of guilt because she feels like she cheated on Tommy. Oliver and Laurel decide just to be friends and Laurel gets a job as assistant district attorney and seems to be hell-bent on taking down the Hood (still not knowing that Oliver is The Hood).When she sets a trap to catch him, the Arrow/Hood is saved by the mysterious Canary. She also admits she is so determined to catch the Arrow, because she blames him for Tommy's death. When Laurel gets kidnapped by a criminal, called "the Dollmaker", the Arrow and the Canary are just in time to save her life. She then realises her misplaced guilt was aimed at the wrong person. She really blames herself for Tommy's death. After these events Laurel starts drinking heavily, combined with taking anti-depressants. She's arrested for drinking and driving and later she also loses her job. At the height of her alcohol and drug abuse, Laurel thinks she sees Sara in her house, but she seems to be hallucinating. When she later discovers Sara is alive, she wants nothing to do with her and blames her for everything that happened..

Then Laurel finds out that Oliver and Sara are back together. She has a big fight with Oliver,which results in Oliver walking out on her. After this she realises she messed up and reconciles with Sara. She also attends a meeting of the AA. Not long after this Laurel is being visited by Slade Wilson, who reveals to her that Oliver is the Arrow. At first she is struggling with this, but later she comes to terms with it and she wants to join team Arrow. Oliver refuses. She also finds out about Sara being the Canary and later she witnesses Sara's death. Laurel is heartbroken and determined on helping Oliver to find Sara's killer (which later turns out to be Thea). Eventually Laurel steps in her sisters footsteps and becomes the Black Canary and a member of Team Arrow. After Laurel finds out about the Lazarus Pit and it's power to heal people, she takes Sara's body there and despite being warned by Malcolm she tries to resurrect her. Sara comes back to life, but she is very different and seems to be haunted by a bloodlust. Sara escapes and goes on a killing spree, but with Oliver's help Laurel saves Sara's soul. Sara then leaves Starling City with Rip Hunter, to become a part of his team. When Starling City is being terrorised by Damien Dhark and H.I.V.E., team Arrow tries to stop them. This results in Laurel being stabbed by Dhark and later that evening she dies in the hospital.

My thoughts about Laurel

At first I didn't know what to think about Laurel. I thought she was kind of a sorehead, but on the other hand she had a very loveable side. From the moment she pulls herself together after her dark period, I started to really love the character of Laurel. I think she has an amazing storyline. Especially in season 4 (which turns out to be her last) Laurel was one of my favourites. And then she died....well that was a bummer. I had to wipe away a tear (or two) during her last scene and really did not expect this to happen. Actually I read somewhere that no one could have expected this, because when the writers introduced the anonymous grave at the start of season 4 they didn't know who was in it yet. They decided it to be Laurel later in the season. Katie Cassidy says she understands why it had to be Laurel. According to Katie, Laurel's story in the tv show was finished. She also said that becoming the Black Canary was a very special moment for her and when she talks about it she still gets emotional. She even convinced the writers of the show to let her take the mask and the jacket back home.

My thoughts about Katie

I love Katie in her role of the Black Canary and I can't wait to meet her later this month at ArcCon. Before I started writing this article, I didn't know she was born into an entertainment family and I didn't know she had a career before Arrow. I just found out she played in Taken a few weeks ago. I didn't notice her the first time I watched it ( years ago) and I had to look twice when I rewatched it last week. Before ArcCon I plan on watching "A Nightmare on Elm Street" and maybe another title. I had fun writing about Katie and I can't wait to see more of her work.