The week before Dutch Comic Con I watched lots of Youtube video's. That was my life that week. (Well, I also had to work, but beside that). Headphones on , youtube on, watching interviews and more. Preparing for the weekend! There I also saw Eugene's video for Dutch Comic Con. He even spoke some Dutch. I really liked the video and was enthusiastic to go to the con!

I like the character of Lancel Lannister in Game of Thrones. He changed so much since season one and has a very interesting storyline. In season 5, it's a significant role and has a big influence on Cersei. I'm also very curious how Lancel will develop further in the series. Is it april 24th yet??? We have been waiting sooo long for the next season of this great show. Can't wait to see how his and other storylines develop and I'm counting the days 'till the start of Season 6.

So reason enough to be excited to meet Eugene! We marched around the artist alley a few times. 4 Game of Thrones guests on a row, what a luck! We were like kids in a candystore. We are so very sorry if we scared you by staring at you, like two douche bags, lol. Of course, I didn't immediately go for an autograph or photo because I'm always a chickenshit at first haha. I doubted about the photo op for the Game of Thrones group, but I could only find that available for the saturday  it was too late already.  That certainly would have been great but alas better luck next time.

We did attend the Q&A on both days, which was a lot of fun to see. It was a Q&A with all 4 of the Game of Thrones guests (Eugene Simon (Lancel Lannister), Ian Whyte(plays multiple roles including the one of The Mountain) , Ian Beattie (Ser Meryn Trant), Ian McElhinney (Ser Barristan Selmy)). I liked to see how they were joking around and had fun together on stage. I also got encouraged by a girl who thanked them for being so nice to everyone. By the way, Eugene started the Q&A by thanking everyone for speaking English. So kind! It strenghtened my feeling that he was really nice and fun to talk to. It really was fun to watch them on stage. They seem to get along very well. When asked who was his favourite character, Eugene answered:

was a really cool character in season 1. Because I loved the way that

at the very very end, just before his death,where as you recall having

gold...having melted gold poored on your head. I mean what a way to go.

But there was just that little bit of vulnerability, when finally

he had a tantrum and he wasn't getting what he wanted.

And then at the very end they said ok, sure...we'll come to Westeros

and we'll do exactly what you want. And then he calms down and

he becomes this kid, he kind of goes: well that's all I wanted. And

something and I really, really liked the way that was just shown

moments before they decided he's weak and we're

going to kill him. So he is a character I really like.."

"One I hate,you know there are so many, but off the top of my

And about who he thinks, is going to end up on the Iron Throne eventually:

"The thing is the Iron Throne, as further you go into the seasons,

the Iron Throne is kind of losing the real kind of depth it has.

Because it's symbolic, it really is you know. It's held

together by really nothing, 'cause the whole of the kingdom

has been in absolute turmoil since Ned Stark was killed.

And I think the character, if you had to give it any power, that I

think would actually be most interesting if people let

him just sit back and do the job would not be Tyrion. I think

if you actually put Varys in the throne he'd be a lot better.

He's far more intelligent, he understands exactly...he's the most

intelligent I would say politician, but also actor out there.

Because I mean he's hidden amongst them for so long.You know

I'm surprised that he is not a member of the many faced Gods...

He's just so good at being who you need him to be. But he's got

this undercurrent of real morality to him. He understands how to

inspire people. That's why he's trying to get the Targaryens back

on the throne. So I'd love it if he took some position of power."

It surprised me that no one said Daenerys. They even said that would be too boring haha. Well, I would love to see her there ;).

Another question was about who they would want to play if they could be someone else (Ian McElhinney answered this question with Arya, btw lol):

"I would have loved to have had a go at Viserys or Theon Greyjoy.

I just think they are good characters. I really enjoyed them

They've both had awful awful times, but I think they are good characters."

An then, someone just fast forwarded this amazing weekend and it was sunday late afternoon, end of convention day 2 wayyy too soon. And we still didn't talk to Eugene! What were we doing?? So after their Q&A, it was almost time to go home, but were standing there, staring at them again. Seeing that Eugne was still there (YEAHHH). I doubted whether he was done, or still signing. It was Liv who said, let's just go. We need to speak to him. I kept hearing Elvis sing "It's now or never" in my head . So, we moved forward. Another guy went to Eugene just before us, also talking to him (And he was still signing Yay!). So we waited. We stood there a bit insecure, looking around. And talkig a bit with the girls behind us, who wanted a picture with Eugene.

Eugene signed a photo for the guy before us and even asked him: Do you also want to take a picture? How amazing is that? I've only once experinced before that an actor initiated a picture himself (That time before was Kim Coates). It just gave me a happy feeling being line and seeing this!You almost did your happy-dance again. Then it was our 'turn'. Eugene had a big smile and welcomed us. He was easy to talk to and asked us some questions when we stagnated. It was so much fun to talk to him. He signed the picture I chose and we could make a picture with him.

And that, while his assistant already was gone and it was the end of the end. I can imagine that they all were preparing to go home and were tired. But Eugene was very patient and kind. I didn't get the feelin he wanted to go, or was in a hurry.  It was a nice chat an I'm very happy that we got the chance to meet him!  He evn asked us to tweet what we think of the new season. Well Mr. Simon we are still waiting for the season to start , but we can tell you it was great to meet you!  And I can't wait to see the Monty Python scene you talked about...lol 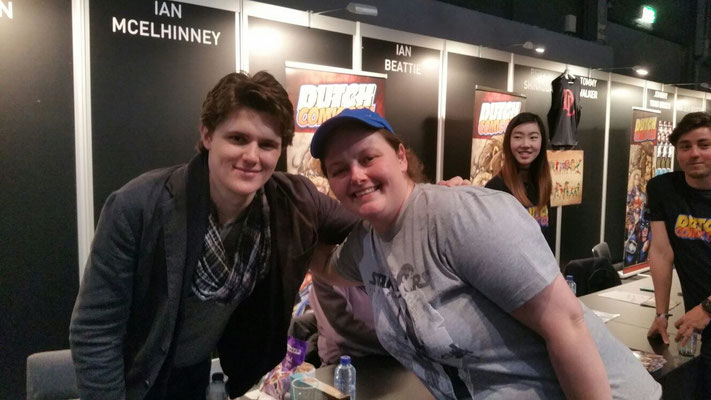 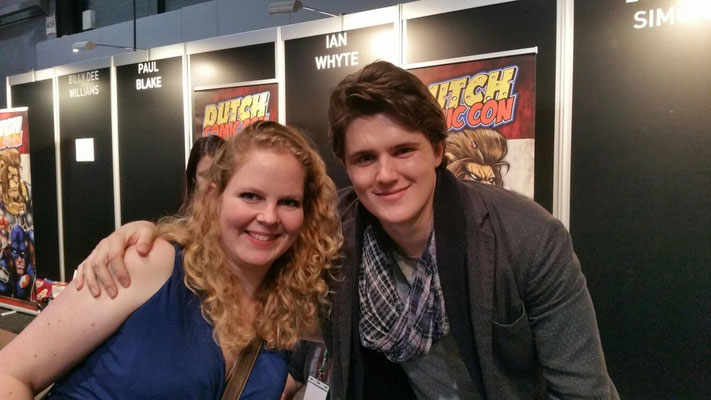 Add to Flipboard Magazine.
Back to all actors
tagPlaceholderTags: DCC, Carola, Liv, conventions